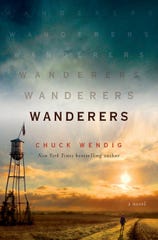 In search of something good to read? USA TODAY’s Barbara VanDenburgh scopes out the shelves for this week’s hottest new book releases.

What it’s about: A comet passes near Earth, and a strange sickness takes holds of humanity. Those in its grip start sleepwalking, wandering unconscious in the same direction on a mysterious journey. Meanwhile, society begins to collapse around them.

The buzz: Kirkus Reviews raves in a starred review, “Wendig is clearly wrestling with some of the demons of our time, resulting in a story that is ambitious, bold and worthy of attention.”

What it’s about: Even true-crime aficionados might have a hard time stomaching this story of Israel Keyes, one of the most meticulous serial killers in modern history, who went undetected by law enforcement until the rape, murder and dismemberment of 18-year-old Samantha Koenig.

The buzz: Publishers Weekly says Callahan “has produced the definitive account of a terrifying psychopath.”

What it’s about: Four women, fed up with their boss’ harassing behavior towards women, decide to take action when he comes up for a big promotion. They start a “bad men” spreadsheet, and all the long-hidden secrets start to be exposed in this #MeToo reckoning.

The buzz: A starred review on Kirkus Reviews says the book is “over-the-top in all the right ways.”

What it’s about: Forty years after a pair of teenage murderers terrorized Southern California, killing a dozen people before dying in a fire, young true-crime podcast producer Quentin Garrison starts asking questions. He’s looking for closure – his own family was torn apart by the murders – but instead discovers clues that puts the whole case into question.

The buzz: “A mind-bending mystery, an insightful exploration of parent-child relationships, and a cautionary tale about bitterness and blame,” says Kirkus Reviews.

What it’s about: The affluent and tight-knit community of Crystal, Colo., is torn apart at the seams with the announcement of the opening of a public magnet school for gifted children. It’s an exclusive institution with limited space, and the competition to get in makes monsters of the parents.

The buzz: A starred review in Publishers Weekly says, “This depiction of the depths to which some parents will stoop to win social advantage for their offspring makes for a smart, piercing novel, and timely given recent headlines.”