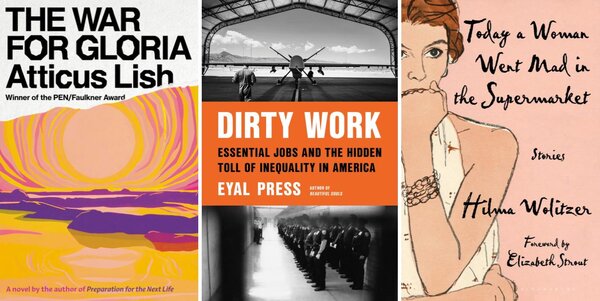 It’s easy to fall into the habit of seeing the Book Review and The Times’s daily book critics as a monolithic bloc of infallible and irreproachable literary opinions — heck, with lists like this one, we sometimes even encourage it. In truth, though, we’re more like the affectionate cranks who make up your local reading group: We’re passionate and knowledgeable, and we disagree all the time. Editors disagree with other editors, our reviewers love books that we hated or hate books that we loved, and subscribers don’t hesitate to let us know when we’ve done an injustice to their favorites. It’s raucous and healthy and wonderful, and ideally it will expand your horizons or at least get you thinking about the contours of your reading life. That’s what we’re here for.

I bring it up now because, for the second time in recent weeks, we’re recommending a novel that received a negative review in our pages — in this case, Pedro Mairal’s “The Woman From Uruguay,” which our assigning editor enjoyed more than the reviewer did. Maybe you will too. Or not! If the description doesn’t appeal, we’ve got lots else that might: Eyal Press’s “Dirty Work,” say, about the morally compromised jobs that we ask others to do, or Adam Harris’s “The State Must Provide,” about the past and present hurdles facing historically Black colleges and universities. Andrew Sullivan has an essay collection covering three decades of his iconoclastic punditry, and David A. Price has a history of the World War II code-breakers of Bletchley Park that points out they were also pioneers in the development of computing. And in fiction, besides Mairal we also recommend a new novel by Atticus Lish and short story collections by Yoon Choi and Hilma Wolitzer.

Me, I’m reading a novel from one of our previous lists, Katie Kitamura’s “Intimacies.” When I bought it this morning at my local indie, where they know me well, the bookseller (her name, appropriately, is Page) enthused about it for a few moments, along with Kitamura’s earlier novel “A Separation,” then said, half-apologetically, “That’s my amateur opinion anyway.” I laughed, and told her the same thing I’m telling you: We’re all amateurs here.

THE WAR FOR GLORIA, by Atticus Lish. (Knopf, $28.) Lish’s second novel, following “Preparation for the Next Life,” which won the 2015 PEN/Faulkner award, is heartbreaking in its portrait of a mother and son facing her mortal illness. The book’s protagonist, Corey, grows up all but fatherless in and around Boston and seeks ways to prove himself. Gloria, his mother, has amyotrophic lateral sclerosis, or Lou Gehrig’s disease, and Corey tends to her. The details are intimate and harrowing and, to some degree, drive the core of the narrative. Lish writes equally well about fighting, construction, boat work, sexual longing, illness. The book is “in easy contact with dark areas of the psyche,” our critic Dwight Garner writes. It is “powerful, intelligent, brooding and most of all convincing; it earns its emotions.”

GENIUSES AT WAR: Bletchley Park, Colossus, and the Dawn of the Digital Age, by David A. Price. (Knopf, $28.) Price reminds us that the analysts at Bletchley Park not only contributed to the victory in World War II by breaking German codes, they also developed the first genuine computer, thereby ushering in the information age. “For British decoders, having that new machine, which they called Colossus, was ‘like moving from a World War I biplane to a rocket,’” Thomas E. Ricks writes in his latest military history column. “It is striking that, in the midst of a global war, and surrounded by a military hierarchy, the scientists, engineers and mathematicians working at Bletchley developed a notably creative and egalitarian management style.”

DIRTY WORK: Essential Jobs and the Hidden Toll of Inequality in America, by Eyal Press. (Farrar, Straus & Giroux, $28.) In this powerful, discomfiting book, Press investigates a series of morally fraught jobs — among them drone warfare operators and prison psychologists — and shows how such work is tacitly condoned by society while also rendered invisible so as not to disturb our collective conscience. “It’s a testament to his insight and vision,” Tamsin Shaw writes in her review, “that in spite of the ugliness to which he exposes us on almost every page, he still makes us want to set aside cynicism and pessimism and join him in finding ways to strengthen the moral bonds between us, however flawed we might be.”

OUT ON A LIMB: Selected Writing, 1989-2021, by Andrew Sullivan. (Avid Reader, $35.) Over three tumultuous decades, as this collection shows, Sullivan, a key figure in the fight for gay marriage, has marched to his own drummer, even if the result is that he is forced to stand alone, battling enemies on both the left and the right. “There’s a through-line in Sullivan’s thought,” David French writes, reviewing the book: “He’s a zealous man who is suspicious of zealotry. Specifically, he’s suspicious of zealotry attached to power. … For 32 years a thoughtful man has demonstrated the courage of his convictions and challenged his readers time and again.”

THE STATE MUST PROVIDE: Why America’s Colleges Have Always Been Unequal — and How to Set Them Right, by Adam Harris. (Ecco, $27.99.) Through vivid storytelling, Harris documents how states and their flagship universities worked to keep segregation alive throughout much of the 20th century, while kneecapping historically Black colleges. “What happens in higher education affects us all,” Anthony Abraham Jack writes in his review, “and what affects us shapes higher education. ‘The State Must Provide’ is a must-read, detailing the complex dynamics that both reflect our nation’s dark history and show us the way toward a more equitable future.”

THE WOMAN FROM URUGUAY, by Pedro Mairal. Translated by Jennifer Croft. (Bloomsbury, $24.) In this swift-moving novel, a struggling Argentine writer heads to Uruguay to collect a large sum of cash and smuggle it back across the border. He also arranges to meet a woman he’s trying to have an affair with. Our reviewer, Ratik Asokan, wasn’t enamored of the book — “an unfocused, lopsided story that packs far too much into 150 pages,” he wrote — but editors here appreciated how Mairal veers from hope to despair in a provocative, often darkly funny narration that strikes a clever balance between midlife-crisis story and noir.

SKINSHIP: Stories, by Yoon Choi. (Knopf, $26.) An element of affection runs deep throughout Choi’s debut, about Korean Americans finding connection in a world that doesn’t always understand them. “Choi’s characters live, forget, make bonds, break them, heal them or not,” Alex DiFrancesco writes, reviewing the book alongside two other new story collections. “Their affections are no less deep for the circumstances that often separate them from one another.”

TODAY A WOMAN WENT MAD IN THE SUPERMARKET: Stories, by Hilma Wolitzer. (Bloomsbury, $26.) The domestic dramas of one 1960s housewife form a novel-in-stories within Wolitzer’s first book since 2012; its themes include absent fathers, infidelity and the line between daily ritual and madness. “Throughout these dispatches from the American home front, the family unit is formed, broken, pasted back together, mused over — but always serves as the anchor for Wolitzer’s narratives,” according to Alex DiFrancesco’s review of three new collections. “Intrigue may lead a story, but for Wolitzer the daily rituals of family always carry it.”