Naelyn Pike, a skateboard aficionado and teenage Apache activist, arrived in Washington in 2013 to testify before Congress. When she passed through the metal detector in the Capitol, the tin jingles on her traditional dress set off the alarm. She was speaking that day to a Senate subcommittee about the fate of Oak Flat, a vast plot of southeastern Arizona that is sacred to the San Carlos Apaches and lies above one of the largest known untapped veins of copper in the United States.

Since 2005, members of the San Carlos Apache tribe have been battling both a mining company and the federal government to keep the copper untouched. Not only would building the mine entail the collapse, or subsidence, of the tribe’s ceremonial land, but since the group’s spiritual identity is tied to that land, its members viewed the prospective demise of Oak Flat as a larger act of erasure and a violation of their religious freedom. In exchange for the land, Resolution Copper — the subsidiary formed by two foreign conglomerates in order to lobby Congress for access to the ore — has promised employment opportunities, an attractive gambit for a region that has long struggled economically.

“Will there really be that many jobs?” Pike asked the Senate subcommittee that day. “For a long period of time?” Pike, whose great-grandfather Paul worked in an asbestos mine, is well versed in the boosterish projections made by extractive industries. She, like many members of her community, no longer believed in the trade-off between the economy and the environment, which has justified extraction in Arizona, as elsewhere, for centuries. (Mining in the state began with silver and gold, then shifted to copper and asbestos.) This arrangement has never paid off for her people, who have been left jobless at the end of boom-and-bust cycles, as wealth fled. Now, the survival of the San Carlos Apaches was at stake, Pike argued. “Please make me understand why you could do such horrid things to these holy precious lands.”

Pike’s personal and political coming-of-age unfolds throughout “Oak Flat,” the masterly new illustrated book by the artist and writer Lauren Redniss, in which she follows the continuing fight between the San Carlos Apaches and Resolution Copper. Copper, Redniss tells us, is as valuable as it is ubiquitous. It’s a component of smartphones and scalpels (owing to its antimicrobial properties and ability to cauterize wounds) and an essential element in renewable energy, used in both solar panels and wind turbines. This makes harvesting it particularly complex: What does it mean to ruin the earth for an element that might sustain it? Despite increasing demand, a vast majority of the world’s copper remains underground, and as Redniss learns, it may be able to remain there, since there’s arguably enough in circulation already to serve our needs.

Redniss weaves together the fraught history of copper extraction, along with Pike’s narrative and those of others in her community, into a brilliant assemblage of words and images. She pulls from an astonishing variety of sources: oral history, legal opinions, anthropological accounts, corporate news releases and careful, firsthand reporting, which she intersperses with her own vibrant and indelible colored-pencil sketches. The result is virtuosic.

As in her previous books of graphic nonfiction, including “Thunder & Lightning: Weather, Past, Present, Future” and “Radioactive: Marie & Pierre Curie, a Tale of Love and Fallout,” the sketches create the book’s spine. Here, the muted hues of buttes and desert allow the reader breathing room between human stories and passages of exposition. Redniss offers rich impressions of old photographs and “wickiups,” the traditional Apache dwellings, which young tribal women learn to build as part of their coming-of-age rituals. She includes images of starry nights and of space, which are arrestingly beautiful, but also provide a deeper perspective on her material. As viewers and readers, we toggle between different scales of time, as well as, thanks to the range of people she spoke to, differing views on whether Oak Flat should be mined. 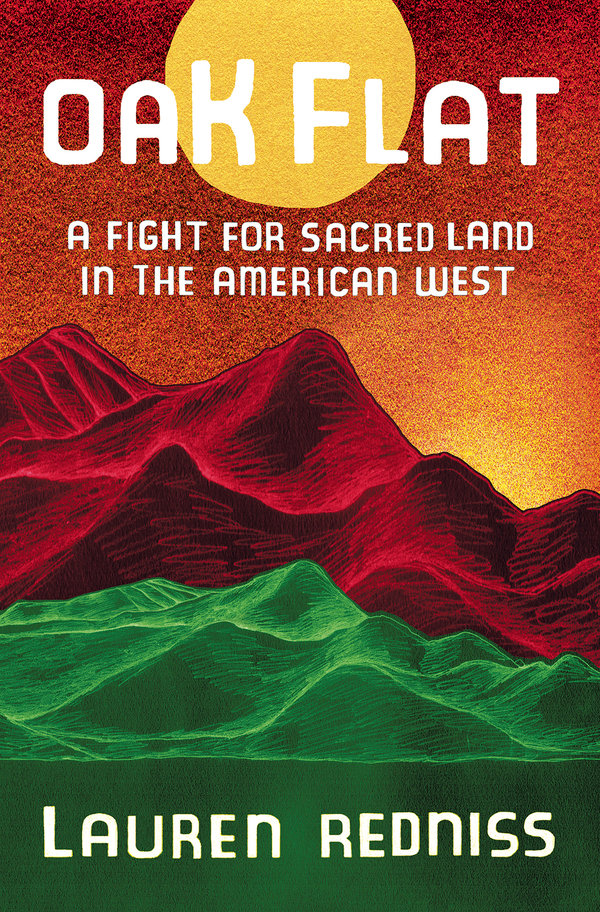 Redniss’s drawings force us to think about who is looking and how. She sketches her approach to the town of Superior, for instance, framing the image through her windshield and including the view in her rearview mirror. She makes scant use of the first person, but the drawing is a reminder that Redniss is a particular observer mediating the book’s voices and images.

As social commentary, “Oak Flat” is an axis mundi — and a sign of our ill-starred times. Prince Andrew, recently disgraced amid accusations that he relied on his friend Jeffrey Epstein to procure the sexual services of young women and girls, made an appearance at a Resolution Copper mine near Oak Flat in 2008. Close by, the Vatican has built telescopes on a mountain sacred to the Apaches. Redniss unearths a 1992 news interview in which a Vatican astronomer lays out what he would do if aliens contacted him through the telescopes. He would evangelize them, he says, asking, “Do you people also know a Jesus who has redeemed you?”

Redniss transforms this interview into a found poem — she scatters the book with her sure-footed iambs — breaking the astronomer’s question into brief lines to slow us down in order to ponder its absurdity. “The goal of the Vatican Observatory was not expressly to / spread the gospel to extraterrestrials,” she writes. Yet, she goes on to quote the words of another Vatican astronomer: “We would be open to that sort of thing.”

The perspectives in favor of the mine that Redniss portrays are no less sophisticated. They, too, are born of long experience with the costs of working in an extractive industry. In 2002, Michael McKee, a Superior resident who worked in a now-shuttered copper mine for 24 years, learned he had multiple myeloma, a cancer of the blood. “Mine is caused by petroleum products, welding, painting, gasoline, oil — everything I did,” he says. Yet McKee is still grateful for the job. “Everything in the world causes cancer,” he goes on, citing his good pay and benefits. “I don’t regret it one bit.”

After the boom-and-bust cycles of the past, which led to joblessness and high rates of drug addiction, some residents are willing to settle for short-term gains, such as the “Fun Night” and community festivals that Resolution Copper sponsors, along with summer swim days, photo contests and parent education at the local pregnancy care center. The company also paid for the town’s new ambulance — the kind of corporate contribution that supporters often see as community building, and that opponents see as more akin to bribery.

The effect of including such varied points of view is that Redniss defies our desire for black-and-white dichotomies, for heroes and villains. In addition to the Apaches who want to safeguard their sacred land, there are competing stories of economic hardship in impoverished Superior. This ability to articulate the complexity of competing perspectives, in part through her play with genres, establishes Redniss as a master storyteller of a new order; she offers readers facts and opinions without sermonizing or subtly editorializing against them.

If the book has a flaw, it lies toward its final pages, when Redniss tips into heavy reliance on her interview transcripts to construct an oral history of recent developments around the mine. Here, it can be hard to keep track of the identities of the various speakers, and their observations become less indelible, easier to lump together or forget.

“I’m not trying to be Pollyanna about this,” Mila Besich-Lira, the mayor of Superior, tells Redniss. “We have to remember that no matter how vehemently opposed you are to mining, it’s never going to go away.” Although Redniss portrays such fatalism with respect, she doesn’t abandon us to it. The reason so much copper remains in the earth is, perversely, its value: It gets recycled at a high rate. Around the world, including in the United States, thieves break into abandoned homes to rip out the copper wiring when global copper prices spike. In one of her poems, Redniss tells us about resilience amid an apocalypse: “It’s dark underground. / It’s dark in outer space. / We grope around, searching / for meaning / and treasure.”