In a new book, a Times reporter details the SEALs culture that fostered Eddie Gallagher’s rise and sheds new light on the events that led to his trial (and acquittal) in a polarizing war crimes case. 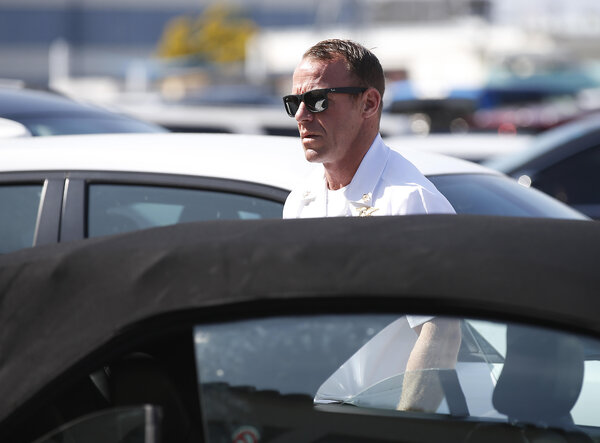 Throughout the contentious trial of Eddie Gallagher, a Navy SEAL chief accused of killing a prisoner in Iraq in 2017, Navy prosecutors never mentioned the name of the Islamic State fighter he had actually been charged with murdering. He was just “the kid” or “the victim,” sometimes “the dirtbag” — not even “John Doe.” In “Alpha: Eddie Gallagher and the War for the Soul of the Navy SEALs,” the New York Times reporter David Philipps names and writes a chapter about the captive, a 17-year-old whose father had desperately tried to stop him from running away to join ISIS. The teenager’s name is Moataz, and his father did not know he was dead until he saw his son’s photo in media coverage of the trial.

This is one of many revelations in the book by Mr. Philipps, who covered Chief Gallagher’s trial and acquittal for The Times, and whose detailed new reporting of those events and what led to them is based on dozens of interviews, thousands of text messages, and thousands of pages of court transcripts, service records and confidential military documents.

(In May 2020, Eddie Gallagher filed a lawsuit accusing the Navy of illegally leaking information to Mr. Philipps and alleging that his articles were defamatory. A judge dismissed most of the lawsuit’s claims against Mr. Philipps last month.)

The book paints a picture of Chief Gallagher that contradicts the image presented by his defenders in court and by some conservative media outlets. In “Alpha,” the SEAL platoon members, deployed in Mosul, worry their chief is becoming “unglued” — abusing opioids and other drugs, stealing, and putting their lives at risk so he can court more battlefield action without any tactical gain. Both in Iraq and after they break their code of silence to report him, platoon members fear he might kill one of them.

In the edited excerpt below, during their time in Mosul, they also worry he is indiscriminately killing civilians. This account is based on the author’s coverage in The Times, Navy investigators’ interviews and investigation files, photos, Navy service records, texts between Eddie Gallagher and several SEALs, and SEALs’ court testimony and their interviews with the author.

Dylan Dille scanned the medieval maze of old Mosul through the black-rimmed eye of his scope. The senior sniper was hidden about 750 meters away in a pile of rubble across the Tigris River. As he searched the alleyways and street corners, he could feel his heart beat under his body armor and his brow go tense because he knew Eddie was hunting, too, and he would have to try to get the first shot.

It was June 2017, four months into the deployment. Eddie had given up on going back to the roof of the pink house and instead had settled on a new place that the SEALs in Alpha called the Towers. The site was two buildings on the east bank of the Tigris standing side by side across the green water from old Mosul. Around the Towers stood the ruins of a carnival grounds still filled with rides and a weed-choked park where locals once spent holidays. The Towers had high ceilings and curving staircases designed to host lavish celebrations. But the war had left the park waist-high with weeds and littered with unexploded shells, and the Towers were little more than bombed-out gray concrete bones.

At the base of the Towers, a modern six-lane concrete bridge had once crossed the river, but it and every other bridge across the Tigris had been destroyed. The center lay broken in two by a massive airstrike, as if snapped by a mighty karate chop. The pieces had fallen into the water, leaving two jagged stumps that jutted out over the river.

The battle for Mosul was in its last desperate weeks. Block by block the Iraqi Army had pushed ISIS into one corner of the old city with its back up against the river. Alpha had set up across the river to shoot the enemy in the back. The platoon spent day after day there, harassing ISIS from the rear while the Iraqi Army attacked from the front.