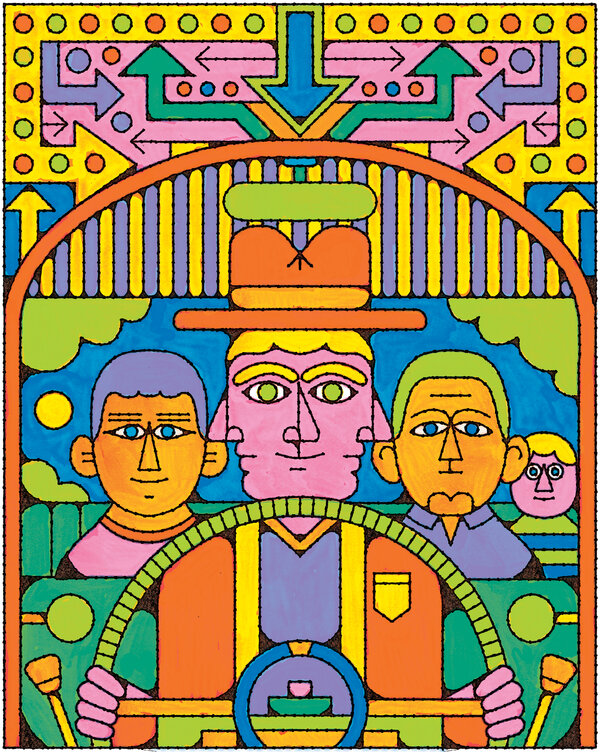 THE LINCOLN HIGHWAY
By Amor Towles

Amor Towles’s third novel begins with a deceptively straightforward premise. Upon the death of his father from cancer, 18-year-old Emmett Watson is released early from a juvenile work farm in Kansas and driven home by a kind warden to a small town in Nebraska, where he is reunited with his precocious 8-year-old brother, Billy. Facing foreclosure on the family farm and violent retribution from the family of the bully he accidentally killed at the fairgrounds, Emmett has an immediate and stark choice — should he stay or should he go?

His decision to start fresh leads to a second choice — Texas or California? Trained as a carpenter, Emmett seeks a destination with a rapidly growing population where he can make a living flipping houses. After a morning spent in the library with the Encyclopaedia Britannica — it’s 1954 — he decides that California is the more promising place. It’s a sentimental as well as practical choice, home to his mother, who left the family years earlier, sending back postcards from locales along the Lincoln Highway during her journey west.

Young Billy, eager to traverse his mother’s path, proves to be a worthy sidekick for this all-American journey. He wears a watch with a second hand and carries in his Army surplus backpack a flashlight, a compass and a folded road map, along with his mother’s postcards and a well-thumbed compendium of adventure stories featuring 26 heroes, from Achilles to Zorro. From the cherished book, he knows the tropes of the travel tale, the requirements of heroes. California, here we come.

Indeed, a reader might very well be fooled into thinking that Towles is setting off — westward, ho-hum — along the deeply rutted tracks of our national lore. But glittering California is a delightful trick of misdirection played on both the Watsons and the reader. Not only do Emmett and Billy never make it there, they don’t even advance one westward mile. In fact, over 10 days and 500 pages, they travel about as far away from California as is possible in the continental United States. If you want to make God laugh, Towles suggests, consult the Encyclopaedia Britannica for population statistics, unfold your map, plan your route. Give yourself a tight deadline of July 4, your mother’s favorite holiday. Then say hello to … New York. As it turns out, not reaching the intended destination becomes entirely the point and power of this mischievous, wise and wildly entertaining novel.

Though capable and self-reliant, Emmett is hardly the master of his own destiny. This was clear when the mouthy kid he punched at the county fair stumbled backward, tripped over a cable, struck his head on a concrete block and died 62 days later — “the ugly side of chance,” the warden tells Emmett — and it’s equally clear when he returns home to consider his future. It doesn’t matter that his plan is lawful, well conceived, well researched. In the universe of this novel, grit and integrity and determination matter, not because they get you where you want to go but because they allow you to persist when you’re inevitably blown off course by chance, vicissitude and the disruptive schemes of fellow questers.

About those fellow questers: There were, it turns out, a couple of stowaways, Emmett’s former bunkmates at the work farm, in the trunk of the kind warden’s car. “Ta-da!” says one, Duchess, the resourceful son of a vaudevillian, as Emmett discovers him in the barn. Duchess is a persuasive and original figure, an avenging moral accountant with a ledger of debts to collect (and occasionally to pay). He is the type of person who provides nuanced ethical reasoning before striking someone in the skull with a two-by-four or a frying pan. Or before driving a stolen car to Harlem to demand a beating from a man he once wronged at the work farm.

Woolly, the other stowaway, is a sweet, stunted, “medicine”-addicted naïf from a wealthy Northeastern family. Woolly has been deemed unfit to receive a large family trust, and Duchess and Woolly have in mind an “escapade” to the Adirondacks to retrieve the money from the wall safe of a family home. (And along the way, Duchess hopes to even a few scores, including one with his father.) In need of a car, Duchess and Woolly attempt to recruit the Watson boys as third and fourth musketeers.

Emmett, in possession of a genuine American dream, has no use for an escapade, but he agrees to drive the fugitives to the bus station in Omaha, a couple of hours to the east, a small but manageable setback to his California scheme. (He keeps running the numbers in his head, revising his E.T.A.) Duchess, the novel’s primary agent of chaos and digression, requests a short detour to an orphanage where he used to live. After he breaks in through a window to deliver strawberry preserves to the orphans, he steals Emmett’s Studebaker and, with Woolly, commences escapade.

At this exhilarating point, California vanishes, the novel moves steadily east by car and train, and Towles goes all in on the kind of episodic, exuberant narrative haywire found in myth or Homeric epic. The novel opens wide, detours beget detours, the point of view expands and rotates. As with Zeno’s arrow, contemplated by Emmett at one point, the novel’s many journeys are “infinitely bisected.” Distance is subdivided and arrival deferred. Stories proliferate and intersect, as do characters, who are diverse in many ways, save gender. (The book lacks a prominent female traveler, and readers might wish that Towles had done more with the gendered traditions of adventure and domesticity.) It’s tempting to speak of the book’s cast of minor characters, though one gradually learns that there are no minor characters. Each one of them, Towles implies, is the central protagonist of an ongoing adventure that is both unique and universal.

Duchess, the engine of the book, seeks his father, seeks atonement and retribution, seeks that safe full of money in the Adirondacks. Emmett seeks Duchess and his Studebaker, as do the police. Billy befriends a Black veteran named Ulysses who has been riding trains for years since returning from the war, his homecoming persistently deferred. Abacus Abernathe, the author of Billy’s beloved compendium, is found on the 55th floor of the Empire State Building and coaxed from his narrative perch back into the world. The anthology of journeys is a touchstone for Billy and for Towles, who is out to demonstrate the profound entanglement of story and life, the ways in which each generates the other.

At nearly 600 pages, “The Lincoln Highway” is remarkably brisk, remarkably buoyant. Though dark shadows fall across its final chapters, the book is permeated with light, wit, youth. Many novels this size are telescopes, but this big book is a microscope, focused on a small sample of a vast whole. Towles has snipped off a minuscule strand of existence — 10 wayward days — and when we look through his lens we see that this brief interstice teems with stories, grand as legends.