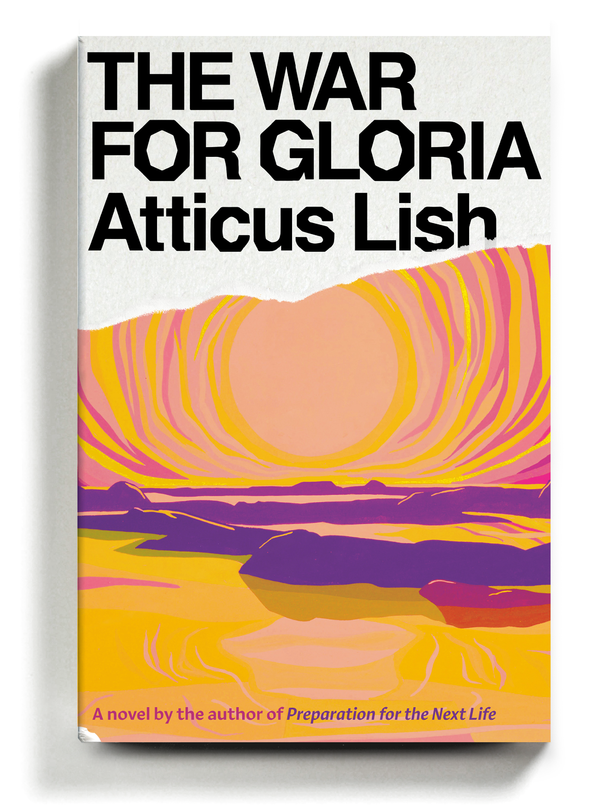 Atticus Lish’s second novel, “The War for Gloria,” is, by and large, a monster — solemn, punishing, kinetic, in easy contact with dark areas of the psyche, and yet heartbreaking in its portrait of a mother and son facing her mortal illness.

It more than pays off on the promise of his first novel, “Preparation for the Next Life,” which won the 2015 PEN/Faulkner award.

“God bless the feral poetries, / littératures and sensibilities,” Les Murray wrote in his poem “Satis Passio.” Lish is among these sensibilities. You never sense he’s merely writing “quality fiction”; he seems to draw instead from a deep well of experience, especially when it comes to the tastes and textures of life on the economic margins.

There are a lot of ways to describe “The War for Gloria.” It may be, for example, the first great mixed martial arts — cage fighting — novel. The book’s protagonist, Corey, grows up all but fatherless in and around Boston and seeks ways to prove himself. He wants to become a hard character, beyond anyone’s power to wound, and he just about gets there.

Life has knocked the good will out of Corey, even though he’s only in high school; in the ring, he comes on with the subtle elegance of a napalm attack.

Another way to describe “The War for Gloria” might be to call it a photonegative of Erich Segal’s “Love Story.” The milieu is M.I.T., not Harvard. Corey’s father is a security guard there, not a student. Corey’s mother, Gloria, drops out of a small college to give birth to him.

The father, Leonard, is a malignant presence who leaves Gloria to raise Corey alone. Mother and son shuffle between abject Boston neighborhoods, sometimes living in her car. They pick up furniture in the street; they keep their books in milk crates; to survive on her small salary, they eat a lot of peanut butter.

Gloria is this novel’s great, glowing presence. Lish is exacting in his portraiture. She came to Boston for college, wanting to be the next Germaine Greer. She listened to Hüsker Dü and wore Doc Martens; she worked as a barmaid; she read a lot of novels in Au Bon Pain. She was fragile, but life might have worked out for her if she’d met the right man.

Instead she met Leonard. “She lost school, love, family, pride, trust in human beings,” Lish writes. In a film, Leonard might be played by Harvey Keitel, whom Frank Rich once called “our foremost interpreter of wife beaters.” Leonard, who is not the kind of man who puts on fresh underwear every day, sucks the confidence out of her for sport.

Gloria begins to have psychological problems. Yet she’s a determined free spirit. Lish describes her as a kind of skinny Janis Joplin.

We learn early in the novel that Gloria has amyotrophic lateral sclerosis, or Lou Gehrig’s disease. She has only a few years to live, and they’ll be hard ones. Corey tends to her. The details are intimate and harrowing and, to some degree, drive the core of the narrative.

“The War for Gloria” is somewhat autobiographical. Lish’s mother was diagnosed with A.L.S. when he was 15. He fought in M.M.A. matches. His father, the editor Gordon Lish, was apparently not a big part of his son’s life.

When Gloria describes Corey’s features, you feel, based on certain photographs, she could be describing the author. I’ll quote this description at length because it demonstrates Lish’s crunching prose:

“As her son grew, he began developing a sharp boyish face. To her, it evoked a primitive ax head, chipped from flint by, say, the Algonquin Indians. He had a small, round, aerodynamic cranium, like a cheetah. The front of his face — his nose, maxilla, sinuses, jaw — projected forward like a canine skull — what an anthropologist would call prognathous. His blond hair grew in a short, tight cap on his head, like Julius Caesar or Eminem. And he had freckles.”

Lish’s novel is powerful, intelligent, brooding and most of all convincing; it earns its emotions. Two things in it don’t convince. One is the character of Corey’s friend Adrian, an M.I.T. student with an overdeveloped castration complex. He seems patched in from a different novel. The other is the novel’s ending, which is gruesome and, to a degree, expedient.

No matter. “The War for Gloria” works because the details are so casually drilled home. The training, the intense rapid weight loss, the absorption of blows, another man’s stubble rubbing your face raw in the cage. Corey dreams of becoming “a shaved-headed saint.”

After a match, “he stank like kerosene, ammonia, aldehyde, sweat. His waterlogged clothes looked like he’d been dunked in the ocean. Foreign hairs from the mat were sticking to his skin.” Lish is just as exacting about construction, boat work, sexual longing, illness.

There’s incisive and caustic writing about Boston. Lish’s characters are contemptuous of the gentility of places like Harvard and M.I.T. — you sense they’d like to break wind as they drive past them in their pickup trucks — and yet they’re deeply attracted to them, too.

“The War for Gloria” reminded me at times of “Townie,” Andre Dubus III’s 2011 memoir. Dubus, like Lish, had a distant, literary father. Both books are set in the seedier parts of Massachusetts. Dubus, tired of being picked on by preppy kids, begins to lift weights and go looking for fights.

I said in my review of “Townie” that someday someone will compose a Ph.D. thesis, or at least a decent blog post, about the sons of literary men who pumped iron, who pointedly upped their testosterone. These include Paul Fussell’s son and Ted Solotaroff’s — and now Gordon Lish’s.

Corey wants to silence the chaos in his own head. He and Gloria both need space, and the company of better people. He says about the two of them: “I’m cutting all the weirdos out of my life so no one can bother us again.”