In “Who’s Raising the Kids?” Susan Linn’s searing indictment of corporate greed, tech companies targeting children are rivaled only by the lawmakers who let them get away with it. 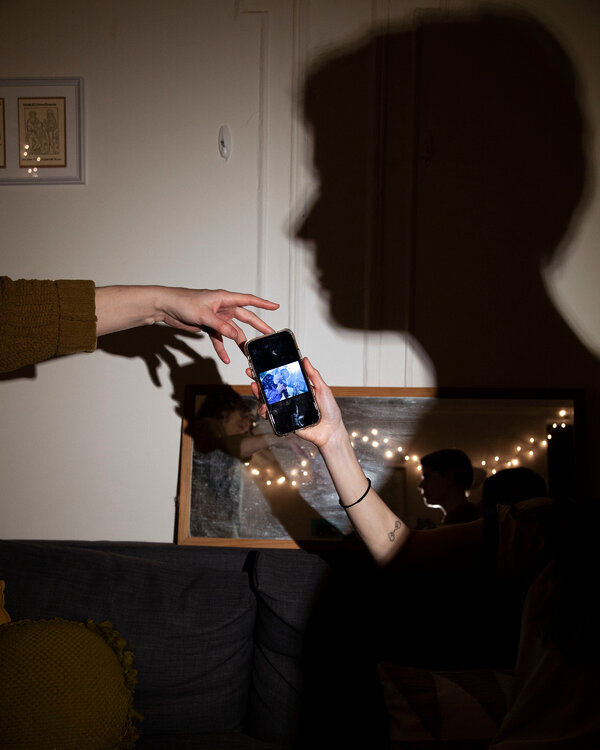 WHO’S RAISING THE KIDS? Big Tech, Big Business, and the Lives of Children, by Susan Linn

A recurring motif in fairy tales is the parental figure who pretends to care, but in fact sees children as a nuisance, a meal ticket or a meal. Think Hansel and Gretel’s witch, scores of wicked stepmothers or the bonneted wolf in Little Red Riding Hood.

In Susan Linn’s engrossing and insightful new book, “Who’s Raising the Kids?,” she shows how tech companies like Instagram, TikTok, YouTube and Snapchat have morphed into a society-wide incarnation of these Brothers Grimm monsters. They pose as caregivers, cultivate affection and attachment in children, use psychological insights to prey on their weaknesses, patiently fatten them up — that is, train them in consumption — all the while viewing children as profit centers. The human and democratic cost, Linn argues, is immeasurable. Given hours a day in which to “raise” the children, these companies replace play with screen time and parental bonds with connections to devices. In the process, they deprive the child of awe, competence, compassion, security, self-confidence and a sense of meaning.

Her thesis: These companies don’t really care about children during the most important developmental times in their lives. They care about ad revenue, and have one primary purpose: to get children to stay online as much as possible for as many years as possible. The average American 8-to-12-year-old child spends over five hours a day online, almost all of it passively watching, and not — as some tech companies claimed — interacting.

Linn is a gifted ventriloquist, whose Audrey Duck puppet was a frequent visitor to “Mister Rogers’ Neighborhood,” but for most of the last two decades she has dedicated herself to protecting children from the harms caused by advertising. A psychologist, she co-founded Campaign for a Commercial Free Childhood (now Fairplay) and is a famously effective advocate who has pressured Disney and Scholastic to stop dangerous marketing to children and tried to get the American Psychological Association to formally condemn those psychologists who aid in such advertising. The author of two books, “Consuming Kids” and “The Case for Make Believe,” she has done all this while keeping her puppetry alive, conducting research at Boston Children’s Hospital and lecturing at Harvard.

Her unique background allows her to examine big-tech companies not through the lens of technology, but as ad agencies. Linn is not anti-tech, and in fact celebrates its ability to connect and open us to new experiences. She is simply, insistently, opposed to advertising to children, and her goal is to protect this vulnerable population from exploitation by ad companies. She advocates for banning the particularly intrusive targeted advertising business model, wherein tech companies gather data and serve up ads based on the unique characteristics of underage users.

Tips for Parents to Help Their Struggling Teens

Are you concerned for your teen? If you worry that your teen might be experiencing depression or suicidal thoughts, there are a few things you can do to help. Dr. Christine Moutier, the chief medical officer of the American Foundation for Suicide Prevention, suggests these steps:

Look for changes. Notice shifts in sleeping and eating habits in your teen, as well as any issues he or she might be having at school, such as slipping grades. Watch for angry outbursts, mood swings and a loss of interest in activities they used to love. Stay attuned to their social media posts as well.

Keep the lines of communication open. If you notice something unusual, start a conversation. But your child might not want to talk. In that case, offer him or her help in finding a trusted person to share their struggles with instead.

In an emergency: If you have immediate concern for your child’s safety, do not leave him or her alone. Call a suicide prevention lifeline. Lock up any potentially lethal objects. Children who are actively trying to harm themselves should be taken to the closest emergency room.

Resources If you’re worried about someone in your life and don’t know how to help, these resources can offer guidance:1. The National Suicide Prevention Lifeline: Text or call 988 2. The Crisis Text Line: Text TALK to 741741 3. The American Foundation for Suicide Prevention

While she admits to being initially intimidated by the organizational complexity of digital corporations, Linn’s expertise in advertising and child psychology quickly convinced her that these behemoths are just more algorithmically gifted versions of the predatory analog ad companies she’d been fighting for decades. In a fascinating chapter about what is known in advertising as “the Nag Factor,” Linn traces the history of how companies have long studied child psychology and used children as consumerist emissaries, unconcerned with the ways in which such nagging divides families or strains finances. The term is not used in Silicon Valley; the tactics are.

While the book is rich with insights, it is not a parenting manual, and Linn is viscerally opposed to blaming parents. They, too, are facing an army of psychologists and big-data scientists determined to break down their willpower. In her words, “a public health and democratic crisis of this scale is not a burden we should place on parents’ shoulders (any more than we should leave teen cigarette regulation up to individual families).”

Play is profound; it is an activity that fosters growth and is essential for the development of empathy. Its power lies in its unstructured nature. Linn argues for strangeness and silence, for uncharted exploration. Playing alone, with adults and with other children is as necessary as sleep, food and love. Tech companies destroy such play and replace it with device addiction, a simulacrum and a false promise of connection that does none of the developmental work of the real thing.

Linn is compassionate toward parents, but unsparing on the inaction of lawmakers. When Steve Jobs announced that he kept his kids off phones, the message, she points out, was invidious: It told Congress that this was a private matter between parents and children, and parents that they were doing a bad job resisting. Linn quotes a marketing expert: “I’m sure it’s annoying when a child screams for sugar, but the [in]ability to say ‘no’ is a reflection of ineffective parenting rather than advertising being a malicious force.” In Linn’s view, it is our societal — not individual — job to protect children. Our anger and attention must be trained on Congress, the state houses and enforcers.

She has a keen eye, and relentless curiosity, so the book is rich with details that paint a full portrait of contemporary child-corporate relations. She quotes an early-learning company’s C.E.O. casually celebrating the fact that new digital assistants “can be a co-parent and help children learn everything.” At one point, posing as a 4-year-old using Echo Dot Kids, Linn tells her Echo Dot she is bored; Echo, which is not supposed to advertise, suggests an array of American Girl and SpongeBob SquarePants products.

The indictments pile up. Meta’s own internal research showed Instagram to be a source of lower self-esteem in girls and suicidal thoughts in teens in America and the U.K. Depression in children used to be unusual; now it is commonplace. In Linn’s telling, we have a decision to make: whether to surrender the responsibility of collective parenting and human development to a bunch of algorithmically rich, morally deprived tech bros.

It is late. A 15-year-old boy is staring at his device. If he is like an average American child between the ages of 13 and 18, he will have spent seven hours and 22 minutes looking at a screen today. He may have played a few games, but, as with younger children, the overwhelming majority of his time will likely have been spent watching videos. His emotions will have careered wildly from envy to FOMO to delight to depression — and the device, this co-parent, may have provided a few TikTok koans but no sustained, meaningful guidance on how to regulate these emotions.

Maybe he’ll be fine; many kids are. But maybe he won’t be. And unless we understand each atomized, private, ad-cultivated addiction as part of public responsibility — not just the responsibility of parents — maybe we won’t be fine as a society, either, let alone live happily ever after.

Zephyr Teachout is a teacher at Fordham Law School. Her most recent book is “Break ’Em Up: Recovering Our Freedom From Big Ag, Big Tech, and Big Money.”