Barrett's big moment
Writers remember their first books for different reasons. Perhaps a launch if the publisher is generous. Not many find their first book coincides with a spell in the nick, but not many authors are like the late Robert G. Barrett, whose rambunctious Les Norton books hit the small screen on Sunday. 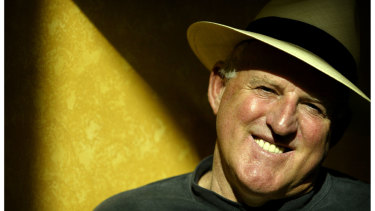 Barrett had been injured at work – he was a butcher – and received some compensation but that went on land and building. So he did four days in the clink to wipe out a parking debt; it was either that or miss a mortgage payment, he once told Bookmarks.

‘‘I’d just written You Wouldn’t Be Dead for Quids [the first Norton book]. I was sitting in my cell and this bloke was looking at me and said, ‘Don’t I know you from somewhere mate’. I said I don’t know and he said, ‘Weren’t you on TV last week, aren’t you that author?’’’

Perhaps the best comment about Barrett comes from Linda Jaivin, who said reading him was ‘‘like propping yourself up at a bar half-pissed, listening to someone who’s three sheets to the wind himself spinning an outrageous, naughty but irresistible tale’’.

Short work, big prize
Melbourne writer Paul Dalla Rosa’s story Comme was published in Granta last year. The magazine people told him they were going to send it off to awards and he didn’t think much more about it. But now he’s on the shortlist for the richest short-story award in the world, the £30,000 ($53,000) Sunday Times prize, and trying not to think about that either. But he’s very happy, given that there are people such as a previous winner, Irish novelist Kevin Barry, and American novelist Emma Cline on it as well. One of the judges, Kit de Waal, described his story as ‘‘word perfect, with undercurrents of sorrow and angst’’.

Dalla Rosa is getting a collection of short fiction ready to send to publishers and also doing a PhD at RMIT, part of which includes writing a novel. But the short form is his love and he laments the lack of recognition stories receive today. ‘‘Fifty or 100 years ago writers would be able to make a living from short stories,’’ he said. He has been writing seriously since he was 18 – he’s now 27 – and has been mentored by Abigail Ulman along the way. One of his stories, The Fame, was published in Meanjin in autumn last year and you can find Comme at granta.com.

The singing detective writer
Val McDermid is going on tour, but she’s not taking the band with her. The Scottish crime writer (not her again, Ed) played Glastonbury, remember, with the Fun Lovin’ Crime Writers – Mark Billingham, Chris Brookmyre, Stuart Neville, Luca Veste and Doug Johnstone – and several other festivals in Britain. But when she heads to the Melbourne Writers Festival later this month and BAD Sydney Crime Writers Festival in September she’ll be flying solo. 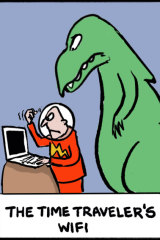 That is until she reaches Sydney where she’ll be cranking up her vocal chords for a performance with the Axe Murderers, a band featuring true-crime writer and former publisher Michael Duffy, crime writer Peter Doyle and folk singer Denis Tracey, former academic and author. (Both Duffy and Tracey are on the board of the BAD shindig.) Duffy used to play in a band called the Victims and hasn’t played live for about 20 years, but says Tracey, co-founder of BAD, is still playing quite regularly. ‘‘We are desperately looking for a drummer; someone who writes crime and drums.’’

Word is that the Axe men and woman will be murdering 500 Miles by the Scottish band Proclaimers – guess who suggested that song – and Duffy is hoping the new outfit will be getting to grips with some AC/DC material, which apparently McDermid has tackled before. badsydney.com

Neds head north
The Axe Murderers will be performing at the Ned Kelly awards night, which will be held on the first night of BAD, but not at the State Library where the main festival is being held. Not quite the right location for a night of strong drink and criminal activity.

It’s been a while since the Neds were in Sydney, having largely made their home in Melbourne since 1997, their second year, despite occasional forays north. Peter Doyle – a virtuoso slide guitarist, by all accounts – made his mark that same year, tieing with Peter Temple for the Ned for the best first novel with Get Rich Quick, and winning the best novel Ned two years later with Amaze Your Friends.

In their early years, the Neds were largely steered by long-time crime aficonado, Mean Streets editor and music promoter Stuart Coupe. Then they came into the tender care of the legendary bigman of crime writing, David Honeybone, and former Kill City bookshop owner Peter Lawrence. These days the Australian Crime Writers Association steers the awards.

Rapinoe scores again
You couldn’t fail to notice the American soccer player Megan Rapinoe during the recent women’s world cup. Apart from the fact that she was rather good, she was also frank in her views about all sorts of things but notably Donald Trump and her refusal to visit the White House while he was its tenant. So it’s not surprising that she has been signed up for a book that will be published by Penguin Press in the US late next year.

The New York Times cited Penguin Press editor in chief Ann Godoff saying the book would be more than about sport. ‘‘Megan has a different platform,’’ she said. “She’s just operating from this very honest and straightforward and ‘This is who I am’ place. I think that’s what many people aspire to.’’ She said Rapinoe would discuss LGBTQI rights, social justice issues and politics. That means it will be another book that Donald Trump doesn’t read.