The only two things Mark Alan Stamaty’s inventive MACDOODLE ST. (New York Review Comics, $24.95) takes seriously are its own seriality and New York City. “MacDoodle St.” originally appeared in 1978 in the country’s first alternative weekly newspaper, The Village Voice, which was founded in 1955 and sadly ceased print publication last year. The Voice was a major counterculture vehicle, and Stamaty gained fame through his “MacDoodle St.” installments — and later, his even more experimental strip “Carrrttooonn.” At a Voice Christmas party, Stamaty confessed to his hero, the pioneering Voice cartoonist Jules Feiffer, “I feel like I’m ruining my career,” to which Feiffer responded, “That’s how you should feel every time you sit down to your drawing board!”

Feiffer contributed the introduction to the collected “MacDoodle St.,” reissued here from its original 1980 edition with a new 20-page autobiographical story by Stamaty. “It takes some getting used to,” Feiffer deadpans. MacDoodle St. — a play on “Macdougal Street,” where Stamaty lived — is as delightfully weird as it is important. It can be difficult, both narratively and visually. It has a meandering, if amusing, fantastical conspiracy-theory plot that seems beside the point. Each black-and-white installment teems with a wild assortment of characters and oozes with the details of city streets. The ornamentation proliferates, including dense borders that often compete with, or meld into, the story at hand. The linework can evoke Saul Steinberg’s eccentric grace.

Stamaty had previously produced several children’s books in his crowded, panoramic style, predating “Where’s Waldo?” and often with the same visual effect. With “MacDoodle St.,” he aimed to create adult comics, and from the first viewed the episodes as a graphic novel in the making. Cerebral and goofy at once, the story line stars Malcolm Frazzle, a young poet who defends a bohemian cafe (where beards, like dinner jackets, are required and rentable) against a takeover group, the Conservative Liberation Front, characterized by its love of ties and Wayne Newton; eventually, he saves society at large from a villain (his former math teacher) who has created a race of monkeys genetically primed to wash dishes. 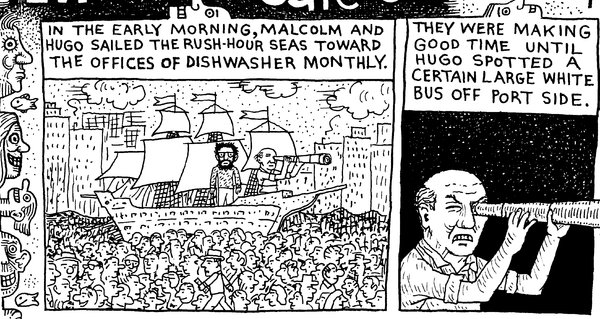 Frazzle composes poems exclusively for the publication Dishwasher Monthly. “MacDoodle St.” is a spoof — Malcolm’s verses are literally about dishwashing, and he is often shown trying to generate rhymes for words like “sink.” In one hilarious episode, he lies on the ground covered in dishes for inspiration. Yet despite the silliness, Stamaty actually values dishwashing as a metaphor for the creative process. You put in the work, get your hands dirty (or inky) and commit yourself to the rhythms of daily toil, the work of the serial cartoonist.

Ultimately, then, “MacDoodle St.” welds its New York City — one characterized by creative opportunities everywhere, from mundane to high-flown spaces — to its own comics grammar. To take in Stamaty’s New York is to wander: the streets, the subway, the delis, bars, cafes, galleries and parks. And the strip displays the delirious energy of the city by doing its own wandering, both thematically and formally. The comic strip itself is a character, with multiple faces on its edges and a pair of legs sticking out, that sometimes gets drunk and has to be reined back in by its creator. In every installment, the strip’s mood is named in a subtitle (I’m fond of “the crammed, complicated, barely decipherable comic strip”). Sometimes the strip becomes the star in an episode, like the one in which it gets into a fight with a classified ad. We see this too in the intricate, pulsing graphic elements of “MacDoodle St.” The panel border often looks as if it’s about to walk off the page.

Jaime Hernandez’s IS THIS HOW YOU SEE ME? (Fantagraphics, $19.99) is also a portrait of 1970s counterculture, but has about as different a look from “MacDoodle St.” as you could get. While Stamaty’s pages are scratchy, seething and dense, Hernandez’s are clean and high-contrast, breathing effortlessly, their white spaces punctuated by dramatic patches of solid black. Hernandez plunges readers into an ongoing work of Los Angeles realism. As the cartoonist Adrian Tomine once told me, about discovering his work as a teenager, “I really felt that I had more of a personal connection and investment in the lives of those fictional characters than in the people in my real life.” Hernandez and his brothers Gilbert and Mario began collaborating on their comic book series “Love and Rockets” in 1980, and almost four decades later, they’re still plumbing the depths of their central characters, who have aged along with the strip.

In “Is This How You See Me?,” a story line from the series issued here as a stand-alone graphic novel, Hernandez confronts the aging of the punk counterculture that once sustained his heroines Maggie Chascarillo and Hopey (Esperanza) Glass — best friends, former lovers, always troublemakers — who are now settled with other partners: Hopey, once a bass player in a punk band, with her wife, Sadaf, and their child; Maggie with a man, Ray Dominguez, a sympathetic “Love and Rockets” mainstay. In the new book, they attend a punk reunion show taking place in their hometown and former stomping grounds, the fictional Huerta, outside of Los Angeles. Like Chris Ware’s “Building Stories,” this is an aching graphic novel about regret and growing older, and the ability — or inability — to confront the past.

The comics form sets up poignant juxtapositions in “Is This How You See Me?” The book is structured episodically, with present-day sequences — in which the two women, in their early 50s, return home, full of self-consciousness — intercut with scenes from the past. While in the table of contents these sections are marked out by year — 1979, 1980 — the story itself seamlessly slides into the past without announcement or warning. “Love and Rockets” focuses sharply on style, and we see how the characters shift fashions, grow older, change bodies. But other juxtapositions float throughout: the as-obnoxious-as-they-used-to-be young queer couple whom Maggie and Hopey encounter at the art house movie theater; their friend Daffy and her punked-out daughter standing side by side at the reunion for the local band Ape Sex. (The mom has some good advice: “I told her you never wear the shirt of the band you’re going to see.”)

Crucially, the book and its characters consider their youth and the scene that formed them from a contemporary vantage point that reveals its seediness. Without pronouncement, “Is This How You See Me?” offers a dark view that mixes with the nostalgia for Los Angeles’s early era of D.I.Y. punk. Maggie and Hopey, as young teenagers, connect at Del Chimney’s house, nicknamed the “Island of Lost Souls,” a space of permissibility, chock-full of comics and records, for the weird and dispossessed kids — Del even calls the young punks who collect there his “children.” But Del, a corpulent, longhaired drug dealer (who gets murdered in 1983), harassed young women. When he meets Maggie, at age 14, he insists on French-kissing her as a rite of initiation into his “castle”; later we see him naked in the bathtub with a young girl. In the present tense, the battles aren’t all won, either: “Is This How You See Me?” also takes pains to show that the streets of Huerta can still be a dangerous space, especially for queer women in public.

Both Stamaty’s and Hernandez’s work brims with affection for the urban landscapes, and denizens, of the cities where they are set. And for Hernandez, as reflected in the beautiful economy of his stylish and distilled panels, this affection is about remaining cleareyed.

Hillary Chute contributes to the Graphic Content column and is the author, most recently, of “Why Comics? From Underground to Everywhere.”