Emma Saylor Payne, the protagonist of Sarah Dessen’s THE REST OF THE STORY (Balzer + Bray, 448 pp., $19.99; ages 13 and up), is a girl of two first names, and of two lives: the one she lived with her mom, Waverly, an addict who died of an overdose when Emma was 12, and the one that came after. At 17, Emma has largely been shielded from her mom’s past by her dad and grandmother, but she can’t help remembering the stories Waverly used to tell about the big lake with the cold, clear water where she grew up. In the summer, the stars were bright and, as her mom told it, “everything was going to be O.K.” 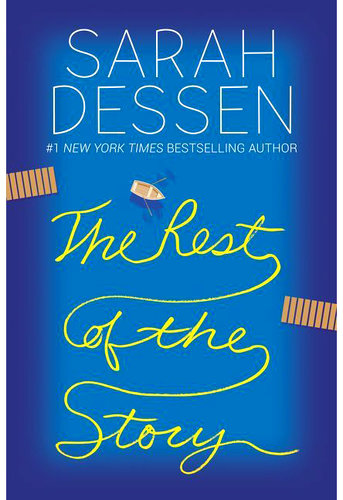 Emma might never have gone back to the lake herself except that her summer plans went awry, and with her dad and his new wife heading off to their honeymoon in Greece, she needed somewhere to stay. Thus heralds her return to a place eerily frozen in her memory, just under the surface but coming back bit by bit. Suddenly she’s surrounded by relatives she hasn’t seen in years but who look just like her, not to mention the best friend she had as a little girl, a boy named Roo who’s as grown up as she is, now. They all call her Saylor, which is what her mom used to call her. But that’s just the beginning of what Emma — or is it Saylor? — starts to uncover. Of course, the deepest mystery of all, and the most important thing to discover, is about herself.

There’s no magic that lets us actually live in books yet, but plunging into the cold, clear waters of Dessen’s slowly winding summer-spell, a tale of family lost and found, is pretty darn close.

Lovers who surmount the odds have always been intense emotional fodder, but rarely have we seen a story like Meredith Russo’s BIRTHDAY (Flatiron, 336 pp., $18.99; ages 14 and up). Morgan and Eric have been best friends since, basically, the day they were born at the same hospital during a freak September blizzard in their Tennessee hometown. They’ve celebrated every birthday together since then, through the death of Morgan’s mom, through Eric’s dive into football, a strategic move to please his abusive father. But there’s a secret Morgan is terrified to reveal to anyone, most of all the person he cares about the most: He feels as if he should have been a girl, and being in the wrong body is very nearly killing him. 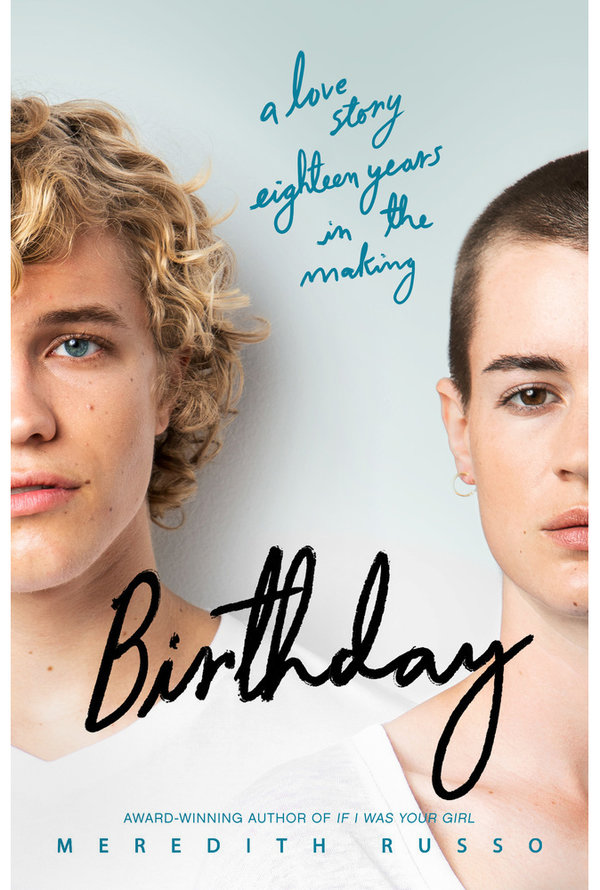 Russo is herself trans, and she brings her whole heart to a story laced with pain that, in the end, lifts with hope. The “birthday” structure could feel like a gimmick — she puts us in Eric’s and Morgan’s bodies, alternating perspectives, for each celebration from ages 13 to 18 — but it works thanks to her characters, especially Morgan, who is true and raw, haunting and undeniable.

One of the great wonders of Y.A. fiction is its power to create new narratives that replace fear and hatred with empathy and acceptance, and to show young people a path for the future that’s better than what we’ve seen. Russo’s narrative expression of the need to live one’s truth, and the option of choosing love through it all, is a valuable reminder of what really matters.

“Here’s something you should know about me: I’m a terrible daughter,” Chloe Pierce announces in the first sentence of Kristina Forest’s debut novel, I WANNA BE WHERE YOU ARE (Roaring Brook, 272 pp., $17.99; ages 12 and up). It’s a great opener even though it’s hardly true — Chloe, “a 17-year-old black girl living in the middle of nowhere, New Jersey,” is a talented dancer who dreams of becoming a professional ballerina; she’s the kind of good kid most parents would kvell over. But Chloe’s dad died when she was 3, and her extra-protective mom has forbidden her from auditioning for a New York City dance company, which she has her heart set on. When her mom leaves for a tropical vacation with her boyfriend, Chloe comes up with a plan: Drive herself to the audition in D.C., try out, and get a spot. After that, her mom has to say yes … right? 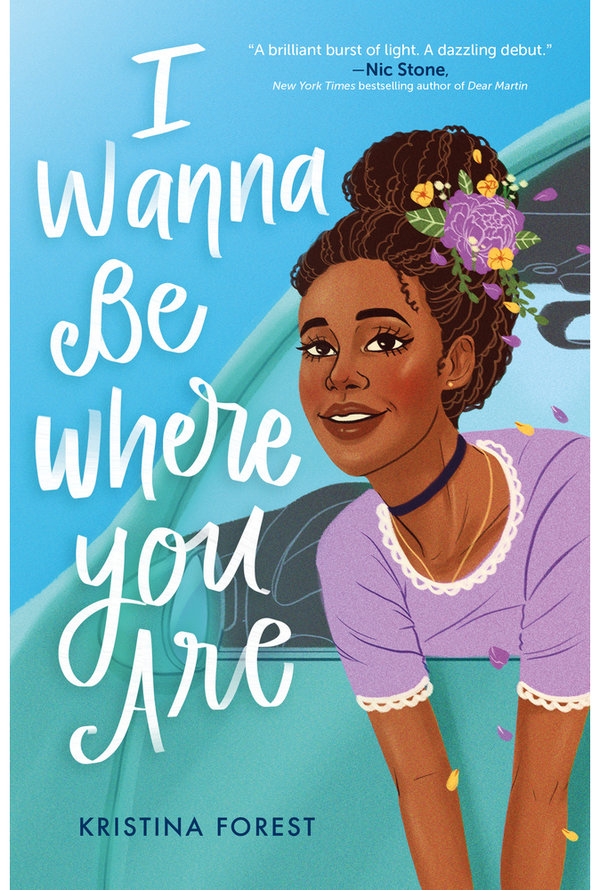 A road trip is a satisfying catalyst in itself; the story is further sparked by Chloe’s irritating neighbor, Eli, who blackmails her into taking him — and his dog, Geezer — along for the ride, and who has his own complicated emotional situation in the works. He’s also cute, and they have something of a past, creating a highly shippable will-they-won’t-they dynamic. But Forest’s novel offers more than romance. This is a bighearted story about being brave enough to go for what you want, even when the rules tell you something different.

In Michelle Ruiz Keil’s ALL OF US WITH WINGS (Soho Teen, 360 pp., $18.99; ages 16 and up), a 17-year-old named Xochi is adrift in the world. She’s never known her Mexican father, and has led a peripatetic existence with her white mother, Gina, and her mother’s abusive ex-boyfriend. But when Gina gets out of town, it’s Xochi’s turn to escape the man who has, in her mother’s absence, abused her, too. She finds her way to an enchanting, musical, wild and weird San Francisco, where she meets an equally enchanting 12-year-old, the brilliant-beyond-her-years Pallas, the daughter of rock stars who live with a troupe of their polyamorous band members and friends in a Victorian mansion. Xochi gets a job as Pallas’s “governess,” and moves in with the family. 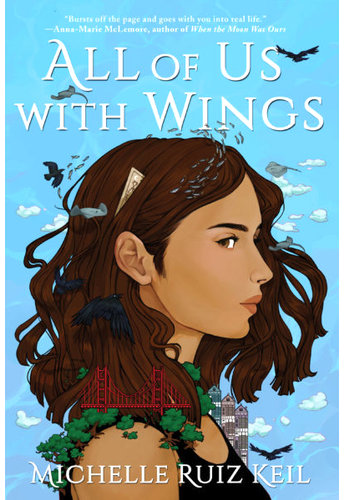 That’s only the beginning. During an after-party at the mansion on the vernal equinox, a night charged with all sorts of energies (and a tongue-piercing), Pallas and Xochi accidentally call up two “waterbabies,” fey creatures who emerge from a tub on a quest for justice. They’re after anyone who’s hurt, or who is currently hurting, Xochi.

Keil’s ambitious debut is jam-packed with twists and depth and froth and function — the world of this novel is real, but magical, too. At times you’re even in the perspective of a kind bookstore cat. The lyricism skews heavy at times, and the many side stories and voices make for a slower read, but maybe that’s the point: The effect is something of a transcendent journey. Those who keep with it (drug references and sexual trauma as well as a flirtation with an older man make it better for older teenagers or adults) will find a book about embracing everything — people, lifestyles, beliefs, experiences — and, in so doing, finding your own distinct power.

The very first scene in Colleen AF Venable’s graphic novel KISS NUMBER 8 (First Second, 320 pp., $17.99; ages 13 and up), drawn by Ellen T. Crenshaw, is of a car parked across from a house with a “Bush/Cheney ’04” campaign sign standing in its front yard. It’s an important detail to remember. Venable follows an irrepressible main character called Mads, short for Amanda, a Catholic high school student who’s almost as interested in finding out why everyone’s so obsessed with kissing as she is with hanging out with her beloved dad. That is, until something weird starts happening at home. Her parents are lying to her, and whatever it is, it’s big. What Mads ultimately finds out is more world-altering than she could have imagined, causing her to question her friendships, her family history, her father’s beliefs and her own sexual orientation. It’s not easy, but it’s a necessary process in becoming the person she truly wants to be. 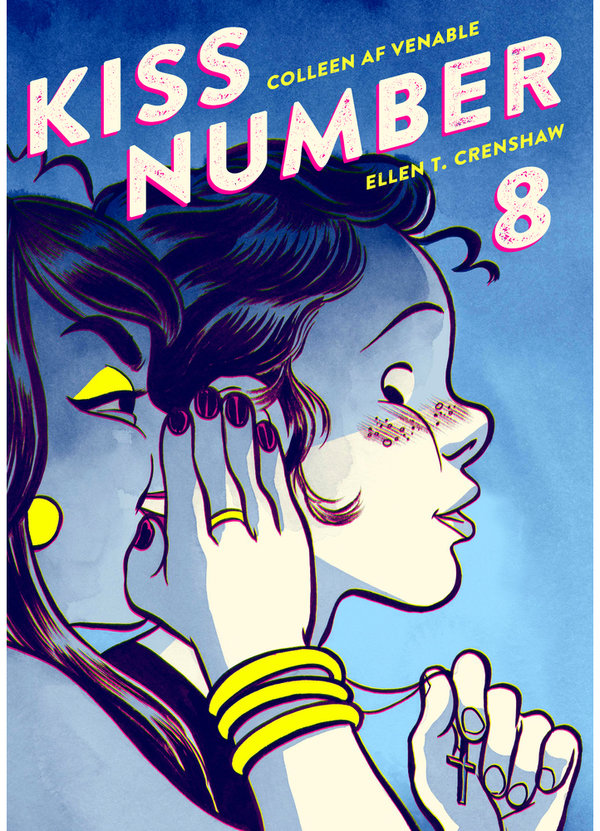 In a Q. and A. that follows the novel, Venable notes that 2004, when she started working on the book, “was a crazy rough time to come out as queer.” Stereotypes prevailed, trans representation was negligible and gay marriage wasn’t legal. Venable’s frequently heartbreaking recollection of the abuse and torment that people went through for being “different” — and the fact that it still happens all too frequently — is a powerful reminder of how far we still have to go.

Jen Doll is the author of the young adult novel “Unclaimed Baggage” and the memoir “Save the Date.”