Middle school is fraught with shifting dynamics. As tweens drift away from adults, they find themselves in the thorny world of friendship, with its ever-changing loyalties, mysterious codes of conduct, and complicated social structure. Middle-grade literature has become increasingly sophisticated in recent years, but even among all the new genres, titles and characters, one element is forever universal: the power of friendship, for better and worse.

In these graphic novels, the main characters have no trouble making new friends. They’re just not sure about the ones they already have.

Ryan Andrews’s THIS WAS OUR PACT (First Second, $14.99, ages 8 to 12) takes us to a nameless town’s Autumn Equinox Festival, when everyone gathers to release paper lanterns in the river. According to legend, the lanterns soar into the Milky Way and become stars once they sail out of sight. Ben, stubborn and determined, makes a pact with his friends to follow the lanterns until they know whether that’s the truth. The pact has two simple rules: No one turns for home and no one looks back. With this bond in place, the five boys set off on their bikes.

But there’s a sixth wheel they hadn’t counted on. He’s pedaling behind them, asking them to wait. Nerd alert: It’s Nathaniel — uncool, pesky, with a bag of homemade Rice Krispies Treats from his mother.

“It’s not that I didn’t like Nathaniel,” Ben tells the reader. “It’s more that, well … no one else did.”

Unfortunately for Ben, his pact-mates drop like flies until only Nathaniel remains. Kindhearted Nathaniel takes the pact seriously — despite not having been originally included — and promises Ben he will see it through.

Once Nathaniel and Ben are on their own, the story truly becomes magical, both in narration and creative execution. The first order of magical business comes in the form of a talking bear, dressed in a winter coat and scarf, who explains that he’s searching for a legendary fishing spot that appears only once a year. This sets off a series of enchanted discoveries that stretch the imagination in wondrous ways.

The novel’s cover shows Ben looking over his shoulder, making eye contact, inviting readers along for the ride. The subsequent artwork and narrative are worthy catalysts to fulfill that promise. The color scheme, with a limited palette of mainly blues, pulls readers into the abounding nighttime magic.

The relationship between Nathaniel and Ben provides the true heartbeat of the novel. Left uninhibited, Nathaniel shines as the more charismatic, adventurous and likable of the two. He’s unfazed by his “nerd alert” status and chooses to embrace new discoveries with open arms — a stark contrast to Ben, who becomes a killjoy once he’s separated from his pack. Ben soon discovers that he has much to learn from Nathaniel. 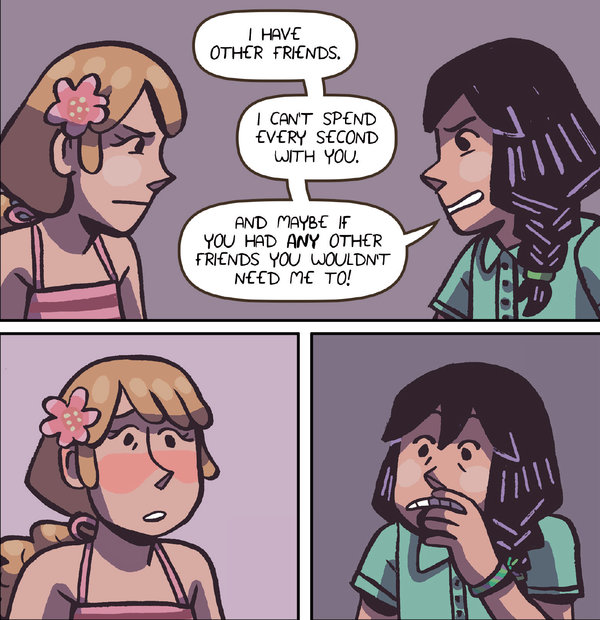 Best friends Olive and Willow are eager for two weeks of summer camp. All goes smoothly at first. The girls want to participate in all the activities together, despite having few things in common. Olive is athletic, active and outgoing. Willow is quiet and shy. So they make a compromise: Olive will sacrifice skateboarding to take magic class with Willow, and Willow will try softball and moviemaking.

Soon, however, Olive finds herself making more and more compromises to appease homesick Willow, who shuns the friendly overtures of other campers and prefers to settle under Olive’s comfortable shadow. Olive is smothered yet sympathetic as she struggles to make Willow happy. As with any codependent relationship, however, this does not work.

“It’s really nice that you’re trying to be there for your friend, but Willow’s happiness is not your responsibility,” says Laura, a camp counselor. “If you’re making yourself miserable trying to cheer her up, that’s just solving a problem by creating a new one, isn’t it?”

Although summer camp and wayward friendships are nothing new on the middle-grade scene, Miller tells a story that isn’t often told — that of an overbearing friendship that threatens to develop into codependency. Tweens are well-served to have this dynamic represented in “Camp,” particularly through the character of Laura, who provides a refreshing voice of reason without being overly pedantic, condescending or intrusive.

Tweens will also benefit from Miller’s playful and communicative artwork, featuring a cast with varied ethnic backgrounds and gender expressions.

At more than 300 pages, “This Was Our Pact” is the weightier of the two and has a narrative that allows for more visual wiggle room, including several astonishing two-page images. “Camp” offers a more traditional comics approach, but includes enjoyable and useful supplemental material in its end pages, such as character sketches, instructions on how to make friendship bracelets and a map of Camp Acorn Lake.

Both of these graphic novels offer an original and much-needed view of the complex world of middle-school friendships. The social landscape for this age group is dotted with quicksand, and young people need books like these to pull them through. Whether that’s done with some magic or a story that sticks to reality is simply a matter of preference.

Erin Entrada Kelly is the author of books for young readers including the Newbery Medal-winning “Hello, Universe” and, most recently, “You Go First.”