In a development which feels inevitable in the iPhone era, books have been revived as luxury lifestyle products. The biggest Canadian bookshop chain, Indigo, is giving Amazon a run for its money not by selling everything, but by monetising the act of reading itself. Indigo started out as a regular bookseller, but then started hawking "reading socks". They were a huge hit, which led to dozens of other products – glasses, pillows, scarves, mats, lunch boxes – designed for impulse shopping alongside this month's bestsellers.

Indigo, which has recently opened its first US outlet and is clearly flourishing, calls itself a "cultural department store". This might be a new concept for the English-speaking world, but when I heard about it I instantly thought of similar places I'd seen in Asia. In Japan, for instance, there's Tsutaya, a chain which opened in 2003 and is described on its website as a "Book & Café Style Store". I defy you to visit its flagship in Tokyo's upscale Roppongi Hills and not fall under its spell. (Opening hours are 7am to 4am, so you have plenty of opportunities.) 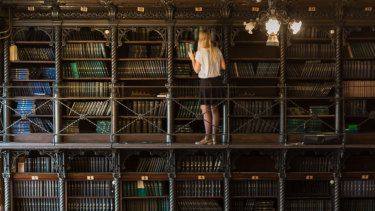 Books can be seen as decorative and illustrative of their owner’s identity.Credit:Shutterstock

Across a couple of modernist concrete buildings connected by glassed-in bridges, Tsutaya practically hums with the spirit of discovery. Shoppers browse shelves, then take their finds to the bustling ground-floor cafe to sip and read; on the top floor is a handsome bar, lit with the kind of desk lamps you see in university libraries, with lots of leather armchairs to curl up in. There are – thank goodness – socks for sale, as well as DVDs, CDs, fridge magnets and all the other flotsam and jetsam you might like to pick up while seeking out the latest Malcolm Gladwell.

In Seoul, the idea of book as accessory reaches its zenith at Starfield Coex Mall, which opened two years ago with a library of 50,000 books. The gigantic wood shelves reaching to a glass ceiling make the surrounding suburban fixtures – American Eagle, H&M – look even more dull than usual. But the library is no architectural whimsy. Mall-goers of all ages actually spend time reading the books contained therein, lounging over sofas, perched on stools, eating a coffee cake while paging through a manga.

Marie Kondo, the Japanese tidying expert, faced backlash recently for suggesting on her Netflix television show that people should limit their book collection to no more than 30. She has compared books left on shelves to a "praying mantis lurking in the grass" and argues that, once read, a book is unlikely to "spark joy".

That's the view at one extreme – that books are there to fulfil a function. At the other end are the Indigos of the world, which see them as decorative, and illustrative of their owner's identity in the same way as a handbag or a scented candle.

In the middle, perhaps, are those readers who love their Kindles but sometimes yearn for the physical product. I know I'm one of these people, because on overwhelming days, I take myself to a nearby department store with a tiny English-language books section. Though dwarfed by the world of titles available on Amazon, its idiosyncratic selection is comforting – Chicken Soup for the Soul motivational books, Lonely Planets, Michelle Obama's memoir. Sometimes I even buy a book to take home, and as I turn the pages, take pleasure in the fact that this is one object that will never need plugging in.

To read more from Good Weekend magazine, visit our page at The Sydney Morning Herald, The Age and Brisbane Times.