Gertrude Himmelfarb, a historian of ideas who applied cool intelligence and elegant writing to making the case that Victorian-era morals should invigorate contemporary social policies, died on Monday night at her home in Washington. She was 97.

Her son, the writer and commentator William Kristol, said the cause was congestive heart failure.

As a historian and author, Ms. Himmelfarb commanded respect for her meticulous, often surprising scholarship, which was grounded in political, literary and personal sources. As a public intellectual, she became a heroine to conservatives and a bête noire of liberals, particularly for her arguments that a little more virtuousness trumps any number of government social programs.

Ms. Himmelfarb was long married to Irving Kristol, who was often called the godfather of neoconservatism, and her histories coalesced with his journalistic polemics to make them, as a couple, a double-barreled force as the United States became more conservative in the 1970s and ’80s.

In more than a dozen books and many articles and essays, Ms. Himmelfarb melded scholarship of Victorian Britain with barbed reflection on contemporary affairs. Her subjects ranged from the pitfalls of modern approaches to history and philosophy to the moral relativism she perceived, with dismay, in the public’s attitude about the conduct of President Bill Clinton — his lying about a sexual affair — that led to his impeachment in the 1990s.

Her cause was to imbue today’s social policies with a Victorian moral sense. Conservative politicians cheered. Newt Gingrich, the Republican speaker of the House, cited her in his book “To Renew America” (1995), writing that the time had “come to re-establish shame as a means of enforcing proper behavior.”

Critics responded in kind. “The intellect on display here is about the caliber of the village biddy who sticks her blue nose into everyone else’s business, offering opinions nobody asked for about how everybody else should live,” Charles Taylor wrote in Salon in 2000.

But part of her appeal was her very firmness on subjects like Charles Darwin, the differences between France and England during the Enlightenment, and marriage in the Victorian era. Ms. Himmelfarb “exposes humbug with deadly effectiveness,” The Economist magazine said in 1987.

However, she also insisted on an appreciation for nuance in studying history. In 1968, A.S. Byatt wrote in The New Statesman that Ms. Himmelfarb “deprecates current intellectual fashions of simplicity and commitment, pointing out that subtleties, complications and ambiguities — once the mark of serious thought — are now taken to signify a failure of nerve.”

Ms. Himmelfarb was a member of an accomplished intellectual clan that sprung from working-class roots. Her brother, Milton Himmelfarb, who died in 2006, was an essayist known for his observations on Jewish affairs. Mr. Kristol, through his writing and editing of journals like Commentary and Encounter, helped forge what came to be called neoconservatism, an intellectual movement begun by disillusioned liberals.

Their son, Bill Kristol, was the founding editor of The Weekly Standard, the influential conservative periodical published from 1995 to 2018. Their daughter, Elizabeth Nelson, has written for conservative publications.

Ms. Himmelfarb did not take her husband’s name when they married in 1942 because she did not want to be bothered with the paperwork, she told The New Yorker. Mr. Kristol died in 2009. In addition to her son and daughter, she is survived by five grandchildren and five great-grandchildren.

Gertrude Himmelfarb was born in Brooklyn on Aug. 8, 1922, to Max and Bertha (Lerner) Himmelfarb, Jews who had emigrated from Russia to the United States before World War I. Her father’s tiny glass-manufacturing business barely kept the family out of poverty. She graduated from New Utrecht High School in Brooklyn.

Ms. Himmelfarb went on to Brooklyn College, where she completed a triple major in history, economics and philosophy. She simultaneously studied Judaic literature at the Jewish Theological Seminary. She met Mr. Kristol, at the time a committed leftist, at a meeting of Trotskyists in Brooklyn when she was 18.

Mr. Kristol wrote in “Neoconservatism: The Autobiography of an Idea” (1995) that he had fallen in love with her on the spot. They went to three or four movies (“only foreign movies since we were cultural snobs,” he wrote) before he asked Bea, as she was known, to marry him.

The sociologist Daniel Bell, their friend and fellow neoconservative, called their union “the best marriage of our generation.”

Mr. Kristol wrote that he was “astonished how intellectually twinned” the two proved to be — “pursuing different subjects while thinking the same thoughts and reaching the same conclusions.” (One early mutual conclusion: to drop Trotskyism.)

Ms. Himmelfarb won a fellowship to the University of Chicago, where she was influenced by Jewish and other European immigrants like Hannah Arendt, Friedrich Hayek, Leo Strauss and Louis Gottschalk, a specialist in the French and American revolutions.

She wrote her master’s thesis on the French revolutionary Maximilien Robespierre and her Ph.D. dissertation on the 19th-century British philosopher John Emerich Edward Dalberg-Acton, or Lord Acton. She spent a year at the University of Cambridge in England in 1946-47, editing a collection of Acton’s essays. In 1952, she published her dissertation as “Lord Acton: A Study in Conscience,” and began to acquire broader notice.

Ms. Himmelfarb received a series of fellowships and pursued a career of academic research. She published several essays on the scholar Thomas Malthus, rejecting his pessimistic prophecies about population outrunning food supply but endorsing his call for moral restraint.

In 1959 she published “Darwin and the Darwinian Revolution,” which challenged Darwin’s scientific rigor. In her 1968 collection of essays, “Victorian Minds,” she praised the role that evangelical Christianity had played in supporting mass democracy. The book was nominated for a National Book Award.

Her positive portrayal of Victorian England contradicted that of Lytton Strachey’s grim one in “Eminent Victorians,” published in 1918. She applauded the Victorians’ “sociology of virtue,” which, she said, called for empathy toward the suffering but also moral sanctions.

Other works questioned modern-day intellectual trends. “The New History and the Old” (1987) criticized historians who took a psychological approach, or relied on quantitative analysis, or dwelled on everyday life in a historical period to the exclusion of the political, social and cultural forces in play. 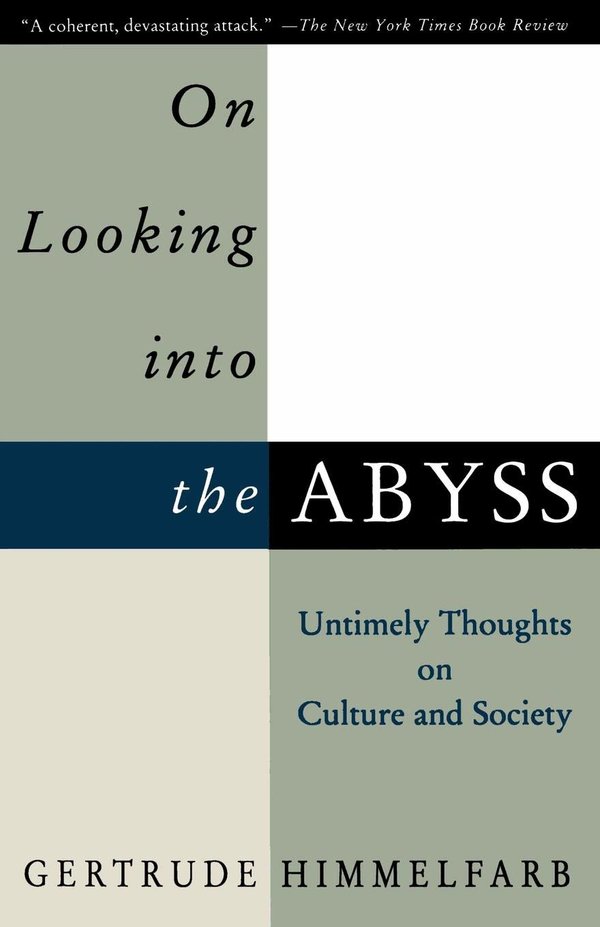 Similarly, in “On Looking Into the Abyss: Untimely Thoughts on Culture and Society” (1994), Ms. Himmelfarb attacked new philosophical approaches. In seven essays in that book, she criticized postmodernism — “Pomoism,” as she called it — for its “denial of the fixity of the past.”

Ms. Himmelfarb’s recent works included “The Jewish Odyssey of George Eliot” (2009); “The People of the Book: Philosemitism in England, From Cromwell to Churchill” (2011); and “Past and Present: The Challenges of Modernity, From the Pre-Victorians to the Postmodernists” (2017).

She was not one who believed that history foretells the future.

“I myself have been too traumatized by Communism and Nazism to have any confidence in the eternal realities of history,” she wrote in 1989, “except the reality of contingency and change, of the imponderable and the unanticipated (and, as often as not, the undesired and undesirable).”

One thing about which she had no doubts, however, was the importance of footnotes. In 1991, writing in The New York Times Book Review, she said she viewed the growing absence of footnotes in scholarly books as “a moral lapse.”

ICM Partners Elevates Six Agents to Partner Status
We and our partners use cookies on this site to improve our service, perform analytics, personalize advertising, measure advertising performance, and remember website preferences.Ok