Lord Voldemort failed to discover that Snape was really on Dumbledore’s side all along. But being such a powerful mind-reader how did he fail to see this? Well a popular new Harry Potter fan theory argues that Tom Riddle could not comprehend love and so Snape’s affections for Lily Potter and desire to protect The Boy Who Lived could never have been detected.

Reddit user Riddlers_Razor argues: “It has been stated that Lord Voldemort is possibly the most skilled Legilimens in the wizarding world.

“In the books, both Professor Snape and Narcissa Malfoy were able to hide their lies from Voldemort.

“Snape did so as part of his history as a triple agent who was really working for Dumbledore and The Order of The Phoenix, as well as when Narcissa lied to Voldemort about Harry being dead in the forest.

“There are some people who said that because of this Snape and Narcissa are perhaps the most accomplished Occlumens in the wizarding world since they were both able to hide their true intentions from Voldemort. I have a theory however that differs.” 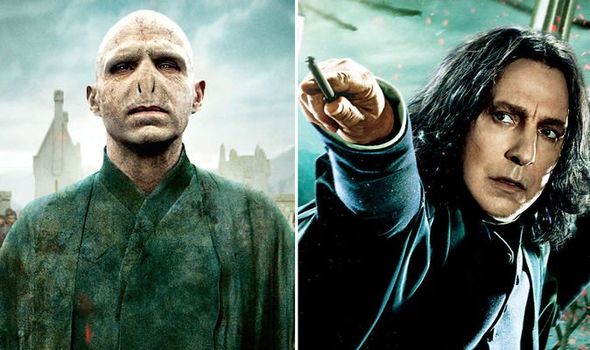 They wrote: “Firstly let us imagine that the act of mind-reading as walking through a series of corridors in a person’s mind where there are doors that open to all the memories and desires within the person’s mind.

“It has been stated many times before that both characters, Snape and Narcissa, acted out of love. Snape was motivated by his love for Lily Potter, and Narcissa was motivated by the love for her son Draco. (Let us not forget that the magic power of a mother’s love was the start of the whole saga between Harry and Voldemort).

“It has been stated many times that because Tom Riddle was conceived out of a loveless union between Tom Riddle Sr. and Merope Gaunt and also because his mother died just as he was born he never experienced love and does not understand love at all.

“Now in the first book when Harry and Hagrid are in London and about to enter The Leaky Cauldron, Harry notices that the non-wizard people walking past seem not to notice the entrance. They have no perception of magic whatsoever, just as Voldemort has no concept of knowledge of or appreciation for love himself.”

They continued: “So going back to the image of reading a person’s mind and walking through the corridors of the mind, looking at the doorways that lead to memories and intentions.

“Imagine a trip through Snape’s mind. We might see a door with a carving of a young Severus Snape crying as he sees his father beating his mother.

“We see a large elaborate door with golden handles and intricate carvings featuring the image of Lily Potter.”

The theorist added: “Just like the Muggles on that London street, Voldemort would not even be able to perceive it. He would walk right past.

“Likewise for Narcissa, if Voldemort took a walk through her mind, he would walk past the door with a carving of Narcissa cradling a newborn baby Draco, and not perceive it.

“The point that I am making is that it is said that for Narcissa and Snape to hide their true motives from other witches and wizards, they would have had to have been great Occlumens, which could be true, at least for Snape.

“However, with respect to Voldemort using Legilimency to discover their intentions, because of his inability to comprehend love, the secrets in their minds were never in any real danger of being discovered.”

The Harry Potter author, who was an impoverished single mother, was rejected 12 times before getting published.

After a £1500 advance from Bloomsbury, who weren’t expecting much from Harry Potter and the Philosopher’s Stone, the series took off.

Today Harry Potter has sold over 500 million copies worldwide and Rowling is now believed to be worth as much as $1 billion.