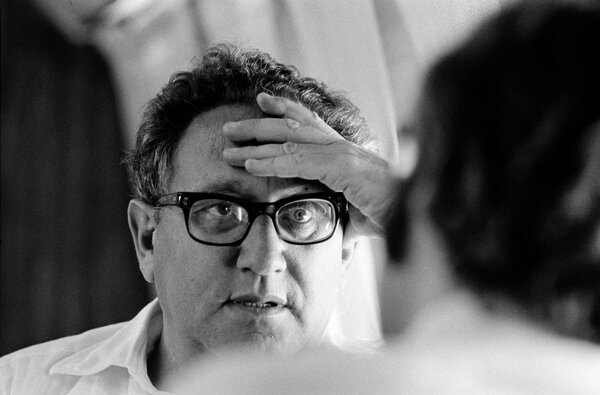 Diplomats are often the heroes of history. They are the men who walk along the edges of battlefields and persuade the belligerents to lay down their arms, turning swords into plowshares. At the dawn of the 19th century, Prince Metternich of Austria famously negotiated a century of peace among the European kingdoms that had fought one another nonstop for a hundred years. He was the model diplomat of his age, and the inspiration for many followers, including the American national security adviser and secretary of state Henry Kissinger.

Martin Indyk’s book places Kissinger in a class with Metternich and other “masters of the game.” He is not the first to do this. Kissinger has made the case for himself in an outpouring of thick, ponderous books, most especially his more than 3,000 pages of memoirs, published in three volumes. Among modern statesmen, only Winston Churchill wrote more to promote himself.

The strongest case for Kissinger’s heroism is found in his Middle East diplomacy, chronicled in fascinating day-by-day detail by Indyk in “Master of the Game.” Serving as President Richard Nixon’s foreign policy surrogate, Kissinger turned a series of disasters into opportunities for remaking the region. After a coalition of Arab states attacked and nearly destroyed Israel during the Yom Kippur observance of 1973, Kissinger managed the emergency resupply of Israeli military forces by the United States. When the Israeli Army turned the tide and entered Egyptian and Syrian territory, Kissinger dived into the maelstrom to negotiate an end to the conflict.

He spent the better part of three years in marathon meetings with Israeli, Egyptian and Syrian leaders that often turned into heated arguments and extended haggling sessions. Kissinger gained command over minute details about borders and settlements, as he simultaneously threatened his counterparts and earned their trust. He did all of this while shuttling between their capitals and managing a range of additional foreign policy crises in Vietnam, Chile, southern Africa and other Cold War hot spots. He reported to a volatile, self-destructive president who was spiraling into depression during the Watergate investigations. Nixon’s successor, Gerald Ford, had little knowledge of or experience in the region. Kissinger often made policy and explained it to the president later.

Despite all of the challenges, Kissinger constructed a new political order in the Middle East. The pillars for his edifice were the main belligerents in the 1973 war — Israel, Egypt and Syria — whom Kissinger cajoled into a set of agreements that disengaged their combat-hardened armies and established stable borders. Kissinger did not negotiate a comprehensive peace agreement, but instead a set of understandings that allowed the leaders of each state to feel secure from future attacks. Kissinger’s mediation removed the Soviet Union as a major influence from the region, and he made the United States a profligate source of military and economic aid to both Israel and Egypt, who continue to draw on American largess today.