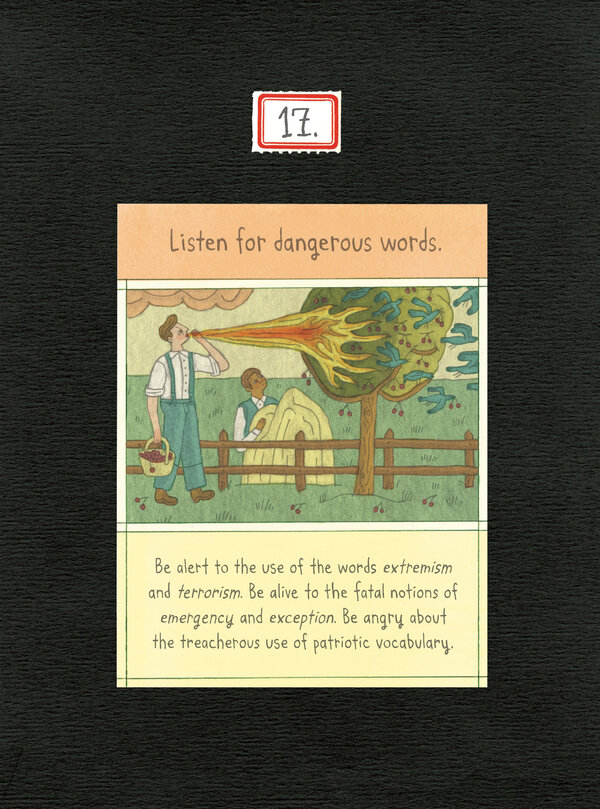 Timothy Snyder’s “On Tyranny: Twenty Lessons From the Twentieth Century” appeared in 2017 during a time of postelection panic in the United States. His deep knowledge as a historian of modern Europe allowed him to identify links between fascism, past and present, and also to offer practical advice. A small book, almost a pamphlet (that so-called impulse buy that often sits near the register), and anchored largely in lessons from the Holocaust and from Russian totalitarianism, it was a best seller, readable and galvanizing. Snyder refused to name Trump in its pages, referring instead to “a president.” Now he’s out with ON TYRANNY: Twenty Lessons From the Twentieth Century: Graphic Edition (Ten Speed, $24), brilliantly illustrated by the German cartoonist Nora Krug, and updated to include allusions to Covid-19 (also unnamed). I sometimes sigh at all the graphic adaptations out there, many of which are unnecessary. Not this one.

Krug is an acclaimed creator in her own right; her 2016 breakout, the graphic memoir “Belonging: A German Reckons With History and Home,” uneasily examines her grandfather’s Nazi past (which she uncovered) and dodges nothing, facing whatever she can know. For “On Tyranny” she pulls from a rich and surprising visual palette, including collage elements like historical photographs — many of which she hand-colors — and images such as wallpaper alongside her own drawings. The words often flow around images, sometimes changing hue. One striking page, a rosy orange, opens with a comment that arrives on either side of a heart enclosing two clasped hands: “The hero of a David Lodge novel says that you don’t know, when you make love for the last time, that you are making love for the last time.” Then below, spanning the page, is a simple banner that bisects the tip of the heart: “Voting is like that.”

The artwork recreates “On Tyranny” as a tripled narrative. This struck me immediately: In between the epigraph and the title page, we encounter a black-and-white photograph of an older man outside, looking straight at the camera, surrounded by black. Who is he, the first face readers see? He has a white beard, dark coat and cap. Is that an armband he’s wearing? There is no caption. I turned to the listing of image credits at the back, where Krug explains where she found each historical artifact, and succinctly notes what it is: “Antique shop: Unlabeled photograph from a German soldier’s WWII album.”

The graphic edition, then, is chilling before Snyder’s words even begin: We’re looking at a German looking through the camera at a Jew, one presumes, who is meeting that gaze in an image the German considered worth memorializing in an album. Why? Krug’s images deepen the force of the original text, compelling readers to stop and reflect. Their presence also suggests ways to interact with the book as an object: I found myself constantly flipping to the back to search for a description (often startling) of what I saw. Snyder’s words operate on one level; the images on another, as they connect to his lessons and also stand apart from them. Krug’s own story — the search for these artifacts — adds yet another layer: She documents their origins. One photograph is recorded as “found amongst my grandfather’s belongings,” while others are from museums, flea markets and research centers. In “On Tyranny,” the focus, at every level, is on trying to understand the past and retrieve something from it.

In DISCIPLINE (New York Review Comics, $27.95), Dash Shaw constructs a fictional story about a young Quaker who has run away from his pacifist family to join the Union Army. Shaw’s also been rooting around archives: The majority of the words in “Discipline” are lifted directly “from actual letters and diaries of Civil War-era Quakers and soldiers.” Krug’s and Shaw’s styles could not be more different: Hers is dense, full of saturated shades, filled up. Shaw’s elegant black line art uses the blankness of the page as an active visual element. Both, however, display an inventiveness when it comes to comics, eschewing the convention of regular panels for a looser, open look. Shaw’s fluid, untethered lines rhyme with the book’s constant sense of movement as the journey of 17-year-old Charles Cox unfolds on the battlefield and beyond.

The refreshingly aerated pages of “Discipline” often reminded me of a sketchbook: Pictures can repeat, as if they’re being worked out. Sometimes images even overlap, as when we see Charles’s mother’s body — specifically, her skirt — drawn over his concerned face. Shaw is a skilled artist who has produced a number of styles across numerous graphic books. He can deliver detail when he wants to — the battle scenes here are harrowing — but on the whole “Discipline” isn’t as interested in delivering visual realism as it is in capturing the texture of emotion and feeling. One strand features Charles, and one his grieving family (his mother’s pain, both personal and philosophical, at his surprise departure to the military is particularly moving). Shaw’s book is calibrated differently, but like Snyder and Krug’s — for which the central insight is that no bystander is innocent — it meditates on personal responsibility. It’s a loss-of-innocence story, but there are values to be recouped.

The up-and-coming French cartoonist Mirion Malle goes for a stripped-down aesthetic, as her title would suggest, in THIS IS HOW I DISAPPEAR (Drawn & Quarterly, $24.95), a graphic novel steeped in millennial culture. We open (with some shades of Alison Bechdel’s “Are You My Mother?”) in a therapy session for the protagonist, Clara, a public relations associate struggling to work on her own writing and cope with the trauma of an earlier sexual assault. With a true-to-life mixture of levity and seriousness, we witness (over a few too many episodes, perhaps) Clara’s dissatisfaction with — and ultimate withdrawal from — social life. Malle ingeniously presents digital screens as comics frames, and vice versa; she links how we access our digital lives with how we read comics, and makes this significant aspect of Clara’s world — something potentially dull to depict — dramatic.