THE MERITOCRACY TRAP
How America’s Foundational Myth Feeds Inequality, Dismantles the Middle Class, and Devours the Elite
By Daniel Markovits

For affluent, white-collar Americans, higher learning is something close to sacred. We bask in the sunshine of enlightenment that prestige universities radiate and we speak of them in the language of dreams, of religious veneration. They are the foe of much that is evil and the source of a lot that is good. More and better education, we like to believe, will solve climate denialism, overcome bigotry and even mitigate our grotesque income inequality.

But now comes Daniel Markovits, a professor at Yale Law School, to tell us that far from solving economic inequality, higher education is one of the central forces driving our yawning class divide. In this ambitious and disturbing survey of the American upper class, he tells us that our elite universities’ sifting and sorting of human beings has helped to herd Americans into a system of rank and status and — yes — caste that is now so clearly passed from parent to child that its most privileged beneficiaries might as well be called an “aristocracy.” Indirectly and along the way, the hierarchy thus constructed has drained the promise from middle-class life and sparked a backlash from the vast presumed unexcellent whom our cult of white-collar achievement has left behind.

Top universities are the central but not only element of what Markovits calls “The Meritocracy Trap.” Meritocracy is also the name for the hiring system used by America’s elite law, tech and finance firms, which recruit the most elite graduates of our most elite schools and turn them into millionaires. Meritocracy is what we call the well-traveled roads connecting Harvard with Wall Street and Stanford with Silicon Valley.

On the surface, meritocracy seems fair, but in reality, Markovits writes, what we call merit is “a pretense, constructed to rationalize an unjust distribution of advantage.” If you know what you’re doing and if you have enough money to spend on expensive tutors and prep schools, the meritocracy is easily gamed — which basically ensures that people who are rich because they went to a fancy school will have kids who will also go to fancy schools and thus also become rich. In this way and over the years, meritocracy has become the opposite of what it purports to be: It is “a mechanism for the concentration and dynastic transmission of wealth, privilege and caste across generations.”

The results are ugly but undeniable. At two Ivy League colleges, the author tells us, data collected by students suggests that “the share of students from households in the top quintile of the income distribution exceeds the share from the bottom two quintiles combined by a ratio of about three and a half to one.” At other elite schools, “more students come from families in the top 1 percent of the income distribution than from the entire bottom half.”

The concentration of rich kids, Markovits reports, is actually increasing as the white-collar class gets richer and more proficient at the admissions game — even as prestigious colleges renounce old policies of favoritism for legacy applicants. About the Ivy League’s recent embrace of diversity, he doesn’t have much to say, but apparently that, too, has done little to slow the march of the entitled 1 percent.

Markovits does find a way to compare the scholarly results of this new class system with racial inequality in the mid-20th century, declaring that today’s “academic gap between rich and poor students now exceeds the gap between white and black students in 1954, the year in which the Supreme Court decided Brown v. Board of Education.” 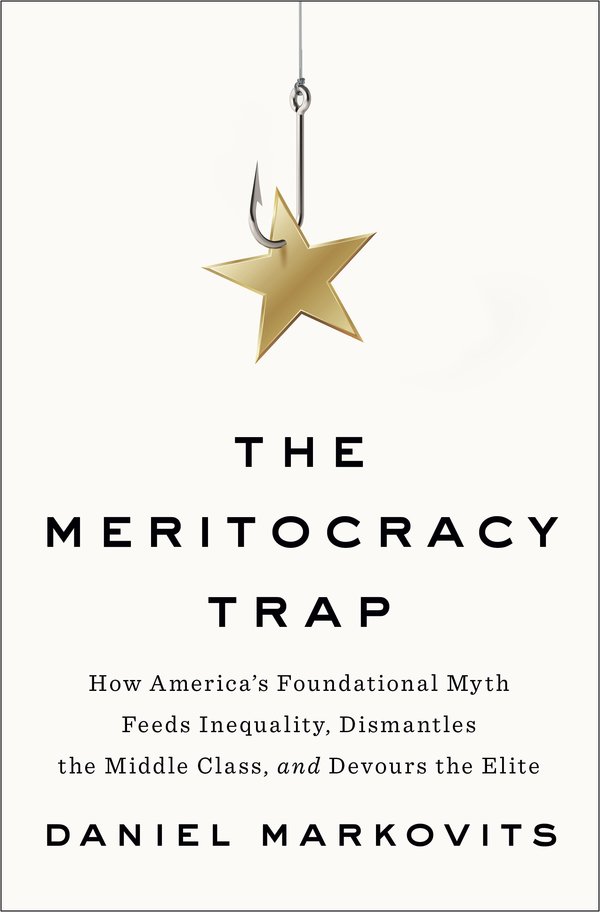 The middle class, broadly defined, is of course an outcast in the meritocracy, left behind in what Markovits calls “a stagnant, depleted and shrinking world.” Once, perhaps, America’s elite professional class served the general public, but today its members figure out how to replace local bankers through mortgage securitization and come up with clever ways to de-skill retail supply chains. With just about every recent meritocratic “innovation” Markovits studies, the winners turn out to be — surprise! — people already at the top of the meritocratic heap.

Rank-and-file Americans are aware that the vital life of the country has passed them by, and they sense also that thanks to their inability to gain admission to elite schools, they and their families are now an excluded people. Meanwhile, our mainstream media graciously flatters our highly educated ruling class for its good taste and advanced values, adding “a moral insult to the economic injury of middle-class stagnation.” One result of this ugly math, Markovits suggests, is opioid addiction and premature death. Trumpist nativism is another.

There is something salutary and urgently necessary in the way the professor pounds his message home, with his statistics and charts and sickening Ivy League anecdotes, informing his right-thinking readers that the status of which they love to boast was purchased at the expense of our egalitarian ideals.

In some ways, however, Markovits pushes his thesis too hard. Yes, smug professionals sit atop our class system, but they aren’t the only winners up there. There are also self-made oil billionaires, retail billionaires, real-estate billionaires and so on. Besides, to put the blame for inequality on the shoulders of the educated elite is to overlook the particular political deeds that decimated the middle class — among them, changes to the tax code that have had a marked plutocratic effect, the crushing of organized labor and the refusal of our nation’s leaders over the years to enforce antitrust laws.

But in other ways Markovits doesn’t go nearly far enough. When he squares off against the meritocratic elite, he keeps pulling his punches, assuring us that its members’ educational credentials really are excellent, that their skills are real and that they work extremely hard. At times he even seems to lament the psychic toll that all that work takes on our white-collar professionals, as though one might simply persuade them to give up their system of privileges.

A more resolute critique would zero in on the fraud and folly and hubris that always seem to accompany the deeds of the best and the brightest. A fuller account of the last real-estate bubble and the global financial crisis would have been helpful here; or the story of the Wall Street bailouts, when one set of high-achieving professionals simply forgave the sins of another; or a comprehensive discussion of the 2016 presidential election, when the Democratic team of geniuses managed to lose to the most unpopular presidential candidate of all time.

The book’s most unfortunate blind spot is the past. Markovits asserts that the oligarchic situation we are in today has “no historical precedent,” by which he seems to mean there has never been a social order in which the people on top were there because they worked so hard and thus appeared to deserve what they had.

However, the idea that the economy rewards the able and the diligent — and that therefore the successful deserve their riches — is one of the oldest and most familiar of American illusions. Yes, our modern-day, SAT-based meritocracy seems more objective than do some earlier ways of rationalizing extreme inequality (Calvinism, for example), but it is not without precedent. Social Darwinism seemed like a scientific idea once. So did eugenics.

I bring this up because if we’re going to do something about inequality, we need to recall that this country has confronted seemingly merit-based class systems before, and we have seen through their falsehoods, and we have taken them apart.

Until that day arrives, we have this book, which forcefully interrupts the comfortable bath of self-flattery in which our well-graduated professionals pass their hours. We are so enlightened, they tell one another; we care so very much; we wish we knew whom to blame for our toxic, embittered society — and Markovits drags them to the mirror and bids them open their eyes.

Thomas Frank is the author of “Listen, Liberal” and “Rendezvous With Oblivion.”