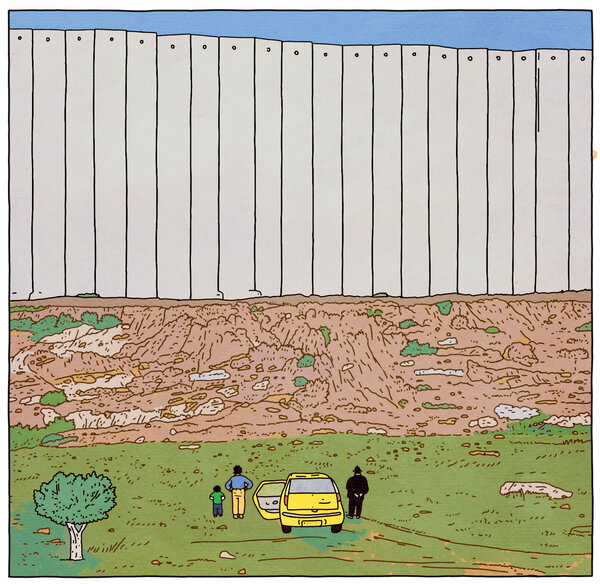 The story of the Israeli-Palestinian conflict is rarely told with much economy. Just the question of where to begin can stop things before they start. 1917? 1948? 1967? But the Israeli graphic novelist Rutu Modan managed to grasp what often gets left out entirely — the emotional truth — and did so in a simple 11-page comic.

“Jamilti,” first published in 2003, begins with a woman and her boorish fiancé fighting over his refusal to participate in wedding preparations. Soon they’re in a taxi, and the fiancé is commiserating with the driver, who — and this is not atypical for Israel — is assuming the role of the country’s prime minister: “We should just bomb them all to hell.” The woman, disgusted, demands to be let out. And just as she slams the car door, a nearby cafe explodes in a burst of fire and glass. She runs toward the blast, where she encounters a horrific sight. A man is lying in a pool of his own blood, both his legs blown off. She takes off her hair tie and makes a tourniquet, then gently cradles his head. She performs mouth-to-mouth resuscitation, though in Modan’s close-up it appears more like a passionate kiss. The man opens his eyes and says one word, “Jamilti.” By the next page the woman is sitting at home with her shirtless fiancé when she learns from the television that the dying man was actually the suicide bomber. “What does ‘Jamilti’ mean?” she asks. “My beautiful one,” her fiancé tells her. We tighten on her face as she sips her coffee, eyes closed, and they return to talking about their wedding plans.

What is that kiss? A hatred that has become a kind of codependency. The corruption of all things, even love, by violence. The stupid certainty of politics and ideology versus the pathos of seeing a dying fellow human. The whole bloody conflict.

Modan began making comics in the early 1990s, almost single-handedly bringing the form to Israel, where, she says, even Tintin and Superman were strangers. At one point she helmed a Hebrew version of Mad magazine. Her three graphic novels, including her most recent, TUNNELS (Drawn & Quarterly, $29.95), out this month, have all been published in English and have established her as her country’s most renowned comics artist.