How my daring Dad duped the Nazis: While his fellow Jews were being deported to Auschwitz, Hans Neumann moved to Berlin under an assumed name and became one of the world’s most brilliant spies

WHEN TIME STOPPED: A MEMOIR OF MY FATHER’S WAR

In the opening pages of this beautifully written, heart-wrenching memoir of love and family and war is a detailed family tree of the author’s Czech heritage.

It seems dauntingly complex as family trees often do, littered with unknown names and interchangeable dates. But then you notice that vast numbers of these men and women died in 1942 or 1944. In the death camps. In the Holocaust.

The earliest of the family to be killed was Ota Neumann, in 1941. Ota was a cousin of the author’s father. Young, polite and thoughtful, he had written letters about the rising tide of Nazi-driven anti-Semitism. Fired from his job for being Jewish, he was interned in a forced labour camp called Lipa, but allowed home for a short break. 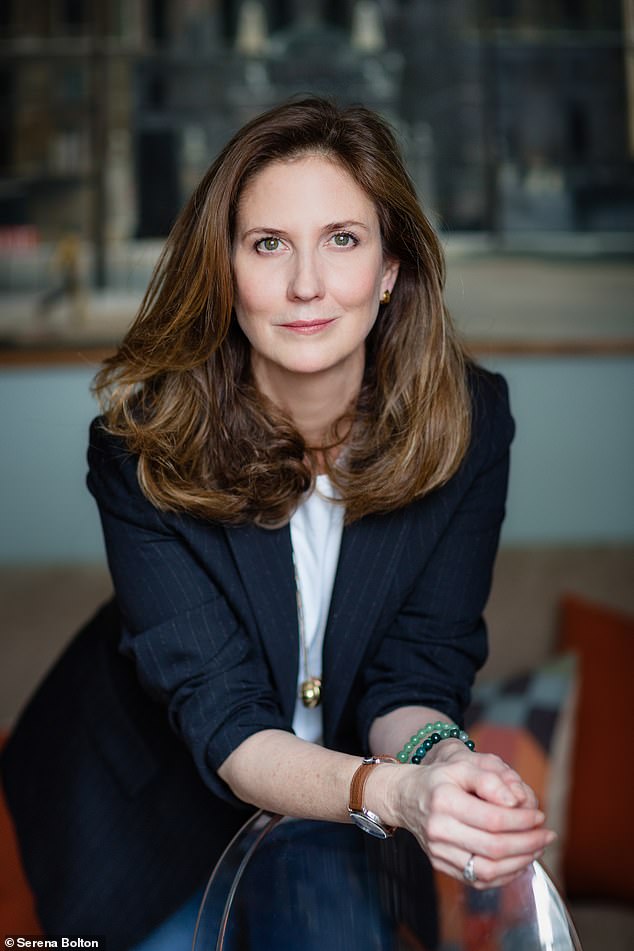 Ariana Neumann (pictured) was brought up in well-heeled middle-class comfort in Caracas, in the pre-Chavez days when Venezuela was a byword for business and industrial energy

On a hot summer’s day in July 1941 he decided to make the most of his freedom by taking his ten-year-old cousin for a swim and a bike ride. A Czech policeman followed them as they rambled (the Gestapo encouraged locals to spy on anyone known to be Jewish).

He later reported he had seen Ota cycling carelessly and bathing in a part of the river forbidden to Jews.

Ota, who was a popular figure, and rather shy, was taken in and interrogated by the Gestapo. He explained he had specifically inquired where Jews might bathe, under the new rules, and had followed instructions to the letter.

But the treacherous policeman was not to be thwarted. He said the swimming area was not designated for Jews and by now Ota was helpless, stuck in the remorseless machinery of Gestapo bureaucracy.

He wasn’t allowed home and on November 21 was deported directly to Auschwitz, just across the Czech border in Poland. Ota was placed in Block 11, the penal unit, which even for that death camp had a terrifying reputation for brutality. 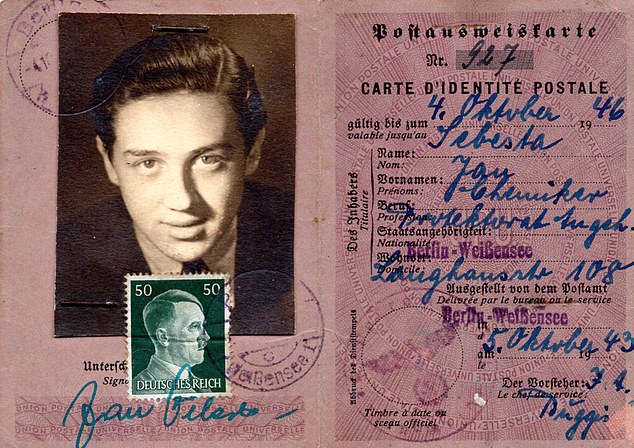 An ID card Ariana found as a girl in Caracas. Ariana’s father assumed a fake identity — Jan Sebesta — and went to live in the very heart of Nazism’s evil empire

The last, so poignant, pictures of him are still to be seen in the Auschwitz archives and are reproduced in this remarkable book: head shaved, in his striped prison outfit, he still looks poised and defiant.

On December 8, 1941, Ota was entered in the register of the Auschwitz morgue. He had been murdered in only 17 days. For taking a bicycle ride on a summer afternoon.

He was just 30. Ota is just one of the many characters, warm, often funny, always courageous, usually full of human frailties, who populate the pages of this overwhelming story. It is part family memoir, and part detective yarn.

The author, Ariana Neumann, was brought up in well-heeled middle-class comfort in Caracas, in the pre-Chavez days when Venezuela was a byword for business, cultural and industrial energy.

This was largely as a result of the country throwing open its borders to displaced Europeans who could not return to their homes after the war. Among the flood of refugees was Ariana’s father Hans.

An imposing, good-looking man, of considerable charisma and intellect as well as a brilliant businessman, he was soon a leading figure in the country, building up a manufacturing conglomerate and becoming one of the most prominent figures in Venezuela’s cultural life. 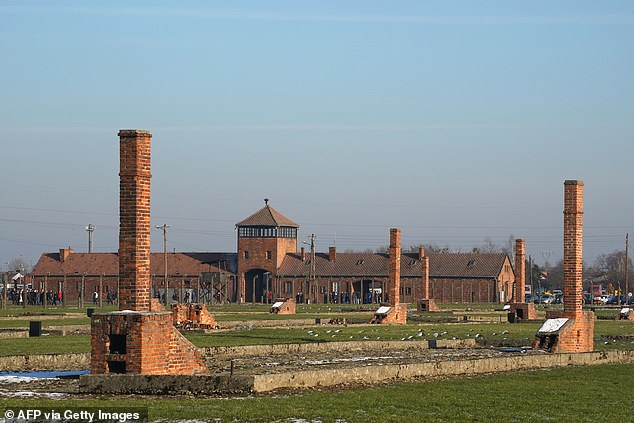 Ariana’s upbringing was golden, though there was always a mystery about her brilliant Dad, a remoteness, a busy-ness that kept him apart. She longed to know more.

She finds a mysterious box and hidden in it an ID card, with a stamp of Hitler and a picture of a man who was clearly her father, but with a different name, Jan Sebesta.

It is the puzzle of that card and Ariana’s drive to unravel the secrets of her father’s past that drives the book.

Who was Jan Sebesta? Why did her father wake screaming in the night in a language she couldn’t understand?

After one such incident, Ariana’s mother tells the anxious little girl, ‘Don’t worry, he had a hard time during the war in Europe. But that was a long time ago.’

When Hans died in 2001, aged 80, he left Ariana a box of letters, diaries, a memoir, photographs.

As she works her way through it, using researchers and translators and travelling over three continents, she starts to peel away this compelling family saga.

It is also a brilliant account of wartime life in Berlin and occupied Czechoslovakia. Even in the midst of harrowing conditions, there is time for pranks, for picnics, for love and marriage.

Plenty of love affairs in fact, because handsome, enigmatic Hans was something of a ladies’ man.Marooned as a young man in Nazi-occupied Prague, Hans has avoided transfer to the camps several times but now, hunted by the Gestapo, he knows his luck can’t last.

He makes an extraordinary decision: he will assume a fake identity — Jan Sebesta — and go to live in the very heart of Nazism’s evil empire.

He will go to Berlin. ‘The darkest shadow lies beneath the candle,’ he tells his friends, quoting an old Czech saying. He will hide in plain sight. 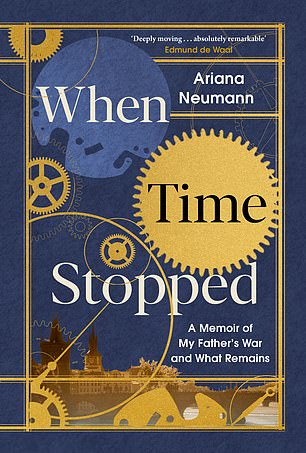 Hans gets a job working in a plastics factory, part of the German war machine. He shacks up with a war widow — that raises a few eyebrows — and his spectacular brilliance makes him a trusted employee.

Soon he has extra access in the plant, and passes on information to the Resistance. Living in wartime Berlin and working as a spy for the Allies: this is quite a story.

But it is also a story about family love, about what families can do for each other. And what they can’t.

While Hans is in Berlin, his much-loved father Otto is finally sent to Auschwitz from a labour camp near Prague. He is 54 and, like all the Neumanns, his hair has turned grey.

Otto knows this will make him seem old, and to the Nazis, age means weakness and weakness means death. So, as usual, Otto covered his hair in black shoe polish.

After 24 hours of exhausting, airless travel crammed into the train, Otto is released into Auschwitz.

But it is November, there is thick fog and the fog turns to heavy rain. The shoe polish washes out of Otto’s hair and down his face.

The guards pull him out of the line, batter him with their guns and send him first in line to the gas chambers. ‘Now my father was gone,’ writes Hans. ‘They had murdered him.’

This remarkable, beautifully written book is full of sadness but it also full of great beauty and joy.

And it is a portrait of two remarkable people.

One of course is resourceful, brilliant Hans. The other is his daughter, the author of this extraordinary memoir, and the woman who, to find her father, has also found herself, and her family.