THE SHADOW KING
By Maaza Mengiste

A conundrum: How to sing a song of war? For those who send humans to die in battle for notions like property and borders, it must seem simple: Sing war broadly, with your whole chest, with lyrics like patriotism, courage and loyalty. For those who mourn the dead — scribes like the Greek poet Simonides, who wrote epitaphs for fallen warriors — your voice must tremble with poignancy, with a certain piteousness. But what about for denizens of the 21st century, those who wish to address the weight of a past crammed with war, while sounding a clarion warning to the future?

There’s much to consider, especially for writers. There’s the problem of scale; both the minutiae and the panoramas of warfare must be balanced and accurate. There’s the problem of beauty. The long history of war writing — from Tennyson to Pat Barker to Adichie — tends toward the grandeur and grace we call “the sublime.” Yet it feels like a mockery or an offense to depict battle too beautifully. You must not be maudlin, either. You must not bray or propagandize. You must be neither too abstract nor too clinical. You must not succumb to the comic-book temptation to glorify gore or indulge in the macabre bloodsloshing of murder. And what on earth do you do with the women?

As Cara Hoffman noted in The New York Times in 2014, “stories about female veterans are nearly absent from our culture. It’s not that their stories are poorly told. It’s that their stories are simply not told in our literature, film and popular culture.” In the ancient tales, women crop up as both the causes and trophies of conflict (Helen, Briseis). In recent narratives, they mostly appear as refugees and casualties. In war stories both old and new, women are nurses to the wounded, and the victims of rape — war’s unbanishable shadow. Rarely are they depicted as warriors. Is that a profound truth or a blind spot?

Maaza Mengiste’s lyrical, remarkable new novel, “The Shadow King,” set during the Second Italo-Ethiopian War, somehow manages to solve the riddle of how to sing war now. She doesn’t seek a narrow path between the straits of these artistic and ethical questions. Instead, she encompasses them in all their contradiction, laying them out in breathtakingly skillful juxtaposition. Indeed, the problem of the woman at war — the fundamental opposition of being the ultimate cause versus the ultimate victim, of power versus precarity — is the structure of conflict at the core of the novel, which ends with the phrase “Settle into a heart and split it forever.”

“The Shadow King” tells the story of Hirut, a young Ethiopian woman who goes from lowly servant to proud warrior. She begins the novel as an orphan who works alongside an unnamed cook in the household of a man named Kidane and his wife, Aster. The relationships between the characters — a tangle of lust, loyalty, jealousy, resentment, tenderness — emerge, fittingly, around a battle over Hirut’s gun. This Wujigra, “designed to deliver a single lethal shot with consistent accuracy,” was given to Hirut by her late father, who used it as a soldier in the First Italo-Ethiopian War. Once the family’s most prized possession, the weapon becomes even more valuable when Italy invades Ethiopia again in 1935. Hirut hides the gun under her bed; Aster, suspicious that the girl has stolen a necklace, finds it during one of her raids; Kidane takes it from both of them. In response, Hirut — in a surprising but convincing turn — starts stealing things from the household and burying them in a hole by the stable. 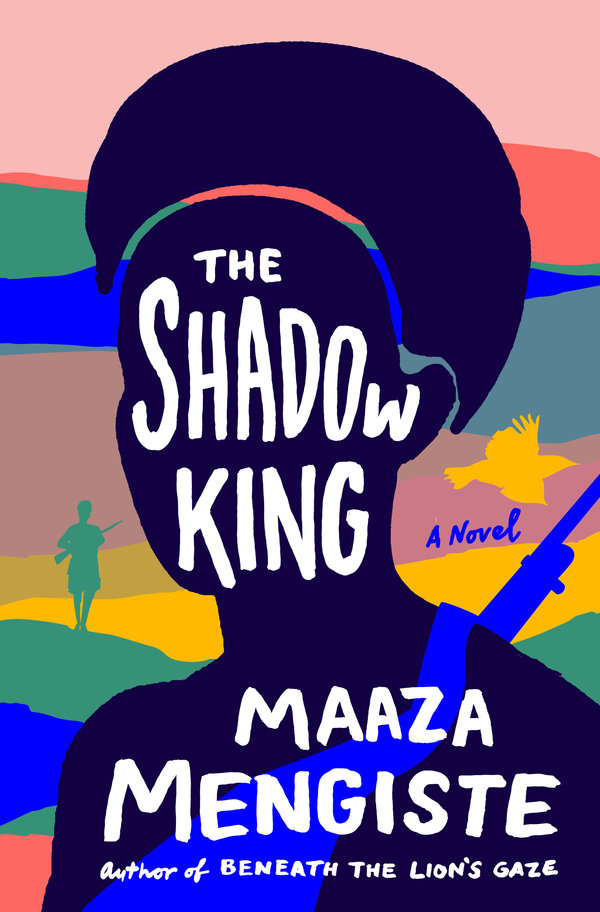 Upon discovering the trove, Aster beats and whips Hirut in a harrowing scene, the beauty and psychological precision of which distinguish the novel as a whole: “The blow comes as a relief to Hirut. It is something to do: to be hit. It is somewhere to go: to be in pain. She welcomes the distraction from the tremor she feels seeping out of Aster and sinking into her own skin. … Slowly, she feels the cuts and gashes, the burn of open wounds. She is splitting into pieces.” When the violence pauses, “the world spins in an unnatural quiet. There is just Aster pressing her face on the ground, sliding toward her. Hirut notes the frantic sorrow in her eyes, the way her mouth is chewing words to spit them out. Dust blooms as Aster drags herself over dirt as if she has forgotten the use of her legs, as if her body cannot contain the full weight of her fury.”

As the novel proceeds, the relationship between Aster and Hirut ebbs and flows, takes odd twists, and bubbles into fury and love. Both women are at different times raped by Kidane: Aster as a child bride, in a wedding-night scene that teeters delicately, terrifyingly, between desire and terror; and Hirut decades later, after he has become her commander. The second time he violates her, Hirut’s response is startling: “She yawns.” And yawns and yawns again — “it is both absurd and luxurious. A shock and a relief. It is a fist uncoiling and expanding inside her body, a long, extended breath singed and shaped by hate” — until, in utter humiliation and bewilderment, Kidane stops. This is not a glib safety tip, a narrative pepper spray, but rather a strange, complex negotiation of power between this man and this woman.

When the war begins in earnest, these personal conflicts do not fall away; they accrue even greater stakes. Like Hirut, Aster too needs “something to do,” to be, beyond her life at home, so she takes on the role of soldier, with wild and fierce pride. When Kidane takes command of a rebel force in the north to fight off the Italians, his wife insists on gathering and training local women to support the effort. Hirut joins the troop, gets her gun back and fights alongside these women, who are celebrated in rhetoric usually reserved for male warriors. When Hirut trains, the foe she pictures is Kidane. She eventually takes on a key role in the war when she notices that a peasant musician named Minim (“Nothing”) bears an uncanny resemblance to Haile Selassie, the emperor of Ethiopia who has vanished from the country. Kidane orders Hirut to disguise Minim as the eponymous “Shadow King” in order to rally the nation’s disheartened rebels. She appears beside him as his royal guard.

Hirut and Aster are eventually captured and kept in a war camp run by a Colonel Fucelli, who commands a Jewish-Italian soldier, Ettore Navarra (or “Foto”; he always keeps a camera with him), to capture the Ethiopian prisoners in another, perhaps more horrific way: by taking pictures of them as they’re thrown off a cliff. Mengiste ventures into the minds of these two men, with their confusions of cruelty and self-pity, their musings about masculinity and representation. She also narrates the inner worlds of two other women, Kidane’s cook and a prostitute named Fifi, both of whom end up working in their own ways as rebel spies. Mengiste even enters the mind of the historical Selassie, whose “interludes” turn this second novel into a kind of prelude to her first, “Beneath the Lion’s Gaze,” about his last days of rule in 1974. Twice, we’re treated to a digressive, informational “Brief History” of minor characters. Interspersed throughout are brief descriptions of Ettore’s photographs, which become a material plot point that draws him and Hirut together decades later, while also working as a canny literalization of the Homeric metaphor. In addition to these many perspectives, a “chorus” interjects lyrical commentary on the action.

This isn’t as complicated as it sounds. All these chapter forms are short, if unpredictable, and the reader feels not at the whim of an experimental dictator, but in the steady hands of a master. As in the passage where Aster beats Hirut, certain words recur (split, spin, bloom, awkward, frantic), and hearts tend to pound and thud a lot. There’s no humor in this novel; laughter is bitter, sarcastic, mad and, just once, happy. But we come to realize that these are deliberate poetic choices — for simplicity and sublimity — as even more references to the Greeks emerge. There are allusions to the “Iliad,” and echoes of Icarus and Daedalus as Ethiopians take flight from the cliff. Selassie has a vision of Simonides, along with a character from “Aida” and a ghost, in a surreal penultimate scene that seemed the only misstep in this majestic novel.

I forgave it because, for once, all this grandeur, all this grace, is in the service of a tale of a woman, Hirut, as indelible and compelling a hero as any I’ve read in years. This novel made me feel pity and fear, and more times than is reasonable, gave me goose bumps. Reading it was like this: In the middle of battle, tortured by the thought of Kidane’s endless power over her, Hirut suddenly loses her fear of death. She runs toward the Italian Army, taps at her own chest, and says: Boom.

Namwali Serpell is the author of “The Old Drift.”