New York: Graeme Gibson, a Canadian novelist and conservationist and the long-time partner of Margaret Atwood, has died.

Gibson's death was announced Wednesday by Doubleday, which has published both Gibson and Atwood. He was 85 and had been suffering from dementia. 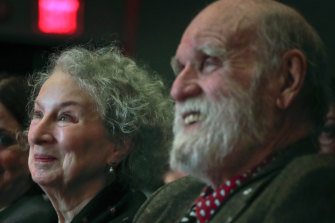 Margaret Atwood, centre, with her partner Graeme Gibson in 2017.Credit:AP

Atwood, whose novel The Testaments came out last week, said in a statement that she and other family members were "devastated" but also "grateful for his wise, ethical and committed life."

Gibson wrote novels such as Five Legs and Perpetual Motion, and he was active with numerous organisations, whether as president of PEN Canada or serving on the council of the World Wildlife Fund Canada.

He had two sons with the publisher Shirley Gibson and a daughter with Atwood.