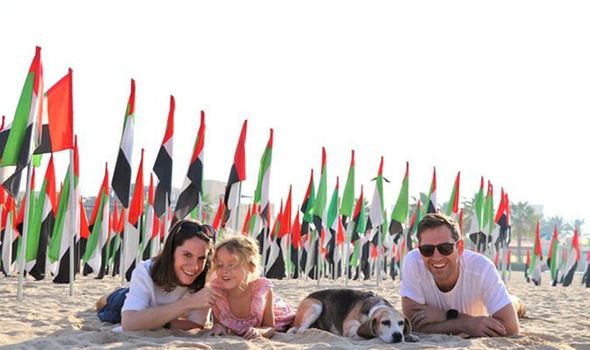 It was at this point in the chaos of moving countries that I decided it would be the perfect time to write a novel. It’s not as if I had anything else to do, right? When my husband was made redundant from his job in Denmark and we uprooted our family and returned to London while he took a job in the Algerian desert, I knew it would be a turning point in our lives.

As sole carer to our daughter, it would be difficult for me to go back to working fulltime.

On the other hand, in the evenings, when she was safely tucked up in bed, I was going to have a lot of time on my hands.

And it had always been a dream of mine to write a book. So, I signed up to an online course and started racking my brain for plot ideas.

It quickly became apparent that my problem wasn’t going to be coming up with a plot, it was going to be trying to filter through the (generally terrible!) ideas competing for space to come up with one that worked.

While I was immediately drawn to a story loosely based on my grandmother’s experiences in World War Two, as the novel bounced through wartime London, Ceylon and modern-day Washington, it became clear I’d taken on too much.

They say you should write what you know but I’d gone too far out of my comfort zone to craft something believable.

I slogged away, making it to the end of the book, but I was pretty sure what I’d created wasn’t going to get published.

The germ of my next idea came from much more familiar terrain; an off-the-cuff conversation I had with a friend.

She was complaining about her job and how hard she was working.

Having been up all night with my toddler, I wasn’t as sympathetic as usual and, rather than letting her go on, I suggested she take some time off.

She looked at me like I was an idiot and told me how much she loved what she did.

Her defensiveness highlighted how complicated female friendships can be and I realised how much I wanted to write about them.

As a former pupil at an all girls’ private school, I had a rich tapestry of toxic friendship experience which I knew could make a fantastic book.

I had been surrounded by polished, over-achieving alpha females and it was from them I took inspiration for one of my main characters, Izzy.

Tall, blonde and gorgeous, with the perfect marriage, a darling daughter and a stratospheric career, Izzy is the type of woman we all love to hate.

Bec, her best friend and arch-rival, came from a place much closer to home.

I poured all of my own insecurities about looks, careers and my place in the world into her.

As a result, when early readers said they found her needy or annoying, it felt like a personal slight!

I knew straightaway that Bec and Izzy had been best friends since they were at school, but that there would be something poisonous at the heart of their friendship.

Once I started writing, the words flowed in a way they hadn’t with my first idea.

I created the framework of a friendship between two women who have been through so many huge life events with each other, but who are locked in a silent but deadly competition set to end in tragedy for at least one of them.

I tore through the beginning of the book, penning the first 10,000 words barely pausing for breath.

Then I started entering it into literary competitions.

To start with, I didn’t hear anything back and just as I was beginning to wonder if I should give up, it won the Emirates Literature Foundation’s Montegrappa competition.

Part of the prize was a meeting with a literary agent.

He gave me some valuable feedback and that, and the validation of winning the competition, gave me the push I needed to go away and keep writing.

I finished the book in three months and started sending it out to literary agents.

I was lucky enough to receive offers of representation from three of the four agents I sent it to.

I chose the wonderful Sarah Hornsley of The Bent Agency and we worked together to prepare the novel for submission to publishers.

A month later, My Best Friend’s Murder sold at auction to Simon and Schuster. It came out in paperback in July.

Funnily enough, as I finish editing my second novel, The Reunion, I am surrounded by boxes again. Since I started my first novel, more than five years ago, I’ve moved from London to Dubai and finally Australia.

I’ve also been lucky enough to have my first novel published in three countries, with my second out next year.

Now, as I start the process of planning Book 3, back in the cardboard city I started in, it seems the perfect time to reflect on how far I’ve come.

You can buy Polly Phillips’s novel by clicking here.