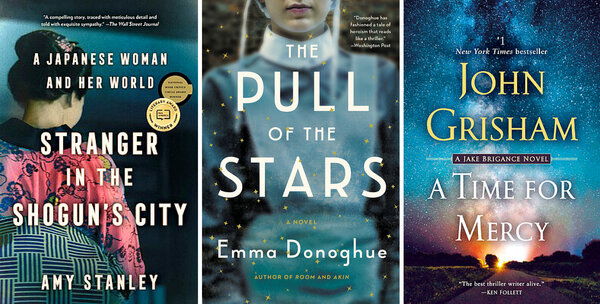 STRANGER IN THE SHOGUN’S CITY: A Japanese Woman and Her World, by Amy Stanley. (Scribner, 352 pp., $18.) Stanley’s discovery of a 19th-century letter from a Buddhist priest’s daughter who fled her family’s rural village for the city that would soon become Tokyo was the genesis for this 2020 biography, which won the National Book Critics Circle and PEN/Jacqueline Bograd Weld awards.

THE PULL OF THE STARS, by Emma Donoghue. (Back Bay, 320 pp., $16.99.) Like Donoghue’s “Room,” this “arresting” page-turner, as our reviewer, Karen Thompson Walker, called it, set in the “fever/maternity” ward of a Dublin hospital during the 1918 flu epidemic, focuses on one space. While the title is a translation of “influenza delle stelle,” from which the disease got its name, the author pins her characters’ suffering on society.

A TIME FOR MERCY, by John Grisham. (Bantam, 480 pp., $18.) “It’s nice to return to the courtroom with someone we trust,” is how our reviewer, Sarah Lyall, greeted this third Grisham novel to feature Jake Brigance, a small-town Mississippi lawyer “specializing in unpopular, seemingly unwinnable cases.” He first appeared in “A Time to Kill.” Here he’s defending a 16-year-old boy whose “excellent reasons for committing murder” don’t change the fact that he’s guilty.

THE DEATH OF JESUS, by J.M. Coetzee. (Penguin, 208 pp., $17.) In this final novel in the Nobel laureate’s Jesus trilogy, David, at 10 years old, is now recognizably a Jesus figure, though the name is never used and the gospel he preaches is that of Don Quixote, who, Coetzee has argued, exemplifies the idea that fantasy can bring us to a “true,” “living” world.

MEMORIAL DRIVE: A Daughter’s Memoir, by Natasha Trethewey. (Ecco, 224 pp., $16.99.) The Pulitzer Prize-winning poet’s haunting memoir of her life before and after her mother’s murder by Trethewey’s former stepfather is an exploration of “trying to get free in a land that conflates survival with freedom and womanhood with girlhood,” Kiese Makeba Laymon wrote in his review. It is also, he noted, a “masterpiece.”

22 MINUTES OF UNCONDITIONAL LOVE, by Daphne Merkin. (Picador, 256 pp., $17.) “So come with me and watch Judith Stone collide with her destiny in the shape of a man named Howard Rose,” the author teases in this romp about sexual obsession. “Come for the promise of a compulsively readable novel,” our reviewer, Adrienne Brodeur, parlayed, “and stay for a fascinating lesson on the making of art.”