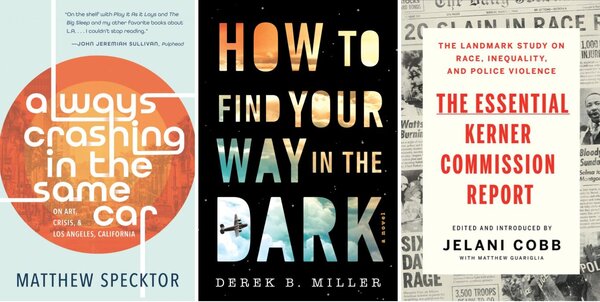 ALWAYS CRASHING IN THE SAME CAR: On Art, Crisis, and Los Angeles, California, by Matthew Specktor. (Tin House, paper, $17.95.) A novelist and critic with a sharp eye for Hollywood blends memoir and cultural critique in this study of classic American failure narratives.

THE ESSENTIAL KERNER COMMISSION REPORT, edited and introduced by Jelani Cobb with Matthew Guariglia. (Liveright, paper, $17.95.) Released in February 1968 in response to widespread civic unrest, this government report is unsparing about police violence and systemic racism. Cobb frames it for a new era.

THE BOY WHO DREW AUSCHWITZ: A Powerful True Story of Hope and Survival, by Thomas Geve and Charles Inglefield. (Harper/HarperCollins, $28.99.) As a teenage Holocaust survivor, Geve drew dozens of stark pictures recalling his experience, presented here alongside his descriptions and memories.

HOW TO FIND YOUR WAY IN THE DARK, by Derek B. Miller. (Houghton Mifflin Harcourt, $26.) A rollicking historical revenge novel that brings back Sheldon Horowitz, the orphaned Jewish hero of Miller’s “Norwegian by Night” (2013).

In DOMINICANA, Angie Cruz tells the story of a young woman named Ana Canción and her struggles living under a suffocating patriarchal ecosystem, first in the countryside of the Dominican Republic and then in New York City.

“Juan Ruiz finally asks properly for my hand in marriage,” Ana tells readers early in the novel. “I am 15. Juan is 32.”

Cruz has written a story that is common knowledge to us immigrants but rarely shared outside our communities. Ana’s mother believes that her daughter’s marriage is the one sure path to prosperity — not just for Ana, but for the rest of the family too: “We’ll all go to New York to be with you, and together we’ll build something,” she says. “I swear to God who’s my witness.” And Ana, listening, understands all too well what her mother is saying: “This marriage is bigger than me. Juan is the ticket for all of us to eventually go to America.”