Who’s Minding the Farm? In this Climate Emergency

In 1987, when Patrice Newell left her job as host of The Today Show, she and her broadcaster partner, Phillip Adams, bought a 1600-hectare property in the Upper Hunter region of New South Wales. They have gradually added to it until it consists of 4000 hectares, including a substantial amount of wilderness area.

Newell, learning everything she could about organic farming, set about repairing 200 years' worth of conventional farming to create a now-successful biodynamic farm producing garlic, olives, beef and honey. She has been a vocal advocate of a more natural way of farming, charting her interest in her previous books, which include the bestselling and emotionally engaging The Olive Grove.

The title of this book, refers, of course, to what Newell believes are our out-dated fossil-fuel-powered agricultural and industrial systems. "The Farm" – Australia – is not in general, she believes, in good hands. Newell is devoted to the notion of producing the best possible soil she can on her farm, and – quite rightly in the best of all possible worlds – would like to see Australia embrace an organic agriculture, of seasonal, chemical-free food, involving fewer food miles and a commitment from all of us to create a smaller carbon footprint. 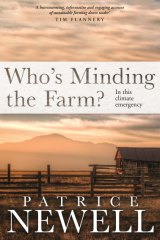 Unfortunately, it’s this Utopian ideal, espoused throughout the narrative, that lets the book down.

I was perplexed by Newell’s thought patterns that can see her leap from a description of chemicals, to hay classification, to weeds and firefighting in just a few hundred words. In many ways, Who’s Minding the Farm?, reads as a series of connected notes, not, sadly, as a cohesive whole.

This is not to denigrate its importance as part of the debate on climate change, or to denigrate Newell’s contribution to the essential work of creating more sustainable systems. Many of the ideas in the book, would have made essays on their own. (In fact the thought occurred to me while I was reading it, that this book would make for engaging short-form television.)

In a sense, this book seems to be for the already converted. For most Australians, food-miles and organic-farming practices are less important than the cost of food, and the convenience of being able to buy produce all-year-round at reasonable prices; making what could be considered to be luxury choices, simply isn’t an option.

However, Newell’s rhetorical title question is a vital one. She can’t give us a conclusive answer, but by giving her readers knowledge of different farming practices and asking them to think about their effect on this wide brown land, she is doing the soil she loves a great service.