Poets go wild on a Gap Year! The Making Of Poetry reveals all about the time Samuel Taylor Coleridge and William Wordsworth spent in Somerset 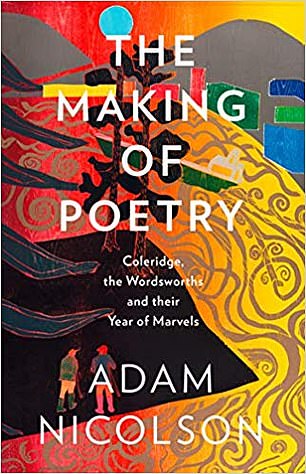 THE MAKING OF POETRY

Adam Nicolson knows how to suffer for his art. While researching this book about the year that Coleridge and Wordsworth spent in Somerset (from June 1797 to the autumn of 1798), he fell down a ravine and ‘lay for some time unconscious in a stream at the bottom’.

He was found by a passer-by and taken to hospital in Taunton for a brain scan and stitches in his scalp. He had also broken two vertebrae.

But the pain was worth it. The Making Of Poetry is one of the best examples of biographical literary criticism I have ever come across, a very far cry from studying the Romantics in a classroom.

To evoke William Wordsworth and Samuel Taylor Coleridge’s time in the Quantocks, where they found their way to ‘a new understanding of the world, of nature and of themselves’, and to examine their ‘fantasies, longings, dreads and ideals’, Nicolson moved there himself.

He studied old maps, discovered forgotten footpaths and gates and went for regular long walks in order to immerse himself in ‘the same lanes, the same air’.

Nicolson magnificently describes ‘the empty hill and occupied valley, high tops and buried combes’ that inspired the poets. He is alert, as a poet himself, to the specifics of landscape: ‘bees in the brambles, honeysuckle in the hedges’.

It was while they were in the West Country that Coleridge composed Kubla Khan and The Rime Of The Ancient Mariner and Wordsworth finished the Lyrical Ballads and Tintern Abbey: classics of our literature, anthology staples.

This hadn’t been the original plan, however. The poets had hoped to knock together money-making melodramas for the London stage — but, in these endeavours, they were hopeless, as what they were solely good at was examining with ‘unbridled delight’ the natural beauties of existence: waterfalls, rivers, skies, daffodils, and so forth.

Writers are such curmudgeonly and competitive creatures, however, so full of fierce envy and resentment, that I am always sceptical about the idea of successful collaborations outside the sphere of television comedy — and so it actually was with Wordsworth and Coleridge, who were no Galton and Simpson.

Nicolson finds more differences than similarities and even detects notes of exasperation.

Coleridge, in any case, sounds rather tiresome: jabbering non-stop, a ‘volcano of ideas’, quoting Milton and Shakespeare, his mind ‘an infinite sequence of overlapping and self-generating circles’.

Plump, 24 years of age and very full of himself, he was keen to escape ‘the persistent coal smog of 18th-century London’ and, by dint of walking 40 miles a day, and stopping off in Bridgwater to deliver a sermon, he’d moved into a damp house in Lime Street, Nether Stowey, to be near Wordsworth, who was renting a manor house with his sister, Dorothy, at Alfoxden, ‘a beautiful and haunting place’.

Wordsworth was 27, with an odd, awkward demeanour. His ‘mouth was always hanging half-open, as he couldn’t breathe through his nose’. Temperamentally restless, he’d abandoned a mistress and illegitimate daughter in France and had already failed to settle in Wales, Yorkshire, Westmorland and Cambridge — where his family hoped he’d study for the church, with the aim of becoming a rural curate. 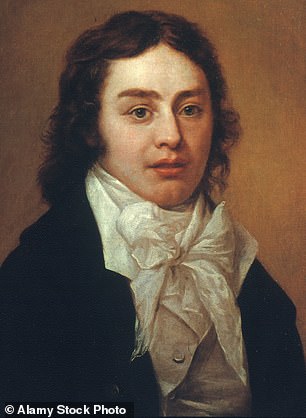 Romantics: Coleridge (left) and Wordsworth. To evoke William Wordsworth and Samuel Taylor Coleridge’s time in the Quantocks, where they found their way to ‘a new understanding of the world, of nature and of themselves’, Nicolson moved there himself

Instead, he wished to be a writer, and his sublime ego was massaged by Dorothy, who ran the household, made fair copies of her brother’s poems, sewed shirts and hemmed bedsheets.

Coleridge, who brought his wife and children to Nether Stowey, was supported financially by the Wedgwood pottery family, who subsidised him to produce literature and not pour his spirit down the sink with journalism.

Wordsworth, from a background of minor Lakeland gentry, presumably received family funds. But, whatever the practicalities of their income and resources, Wordsworth and Coleridge, on their long daily rambles in the countryside, found that ‘their differences pulled and rubbed against each other, with an intermingling of affection and doubt’.

Wordsworth, it became clear, was a singular man, focused on the material universe, the weather and geology. Coleridge, by contrast, was up in the clouds — preferring the uncanny and the supernatural — and Wordsworth didn’t like his poetry one bit. He thought The Ancient Mariner was ‘poorly made, poorly written’. Where was the motivation for the shooting of the albatross? Good question.

The problem was that Coleridge was often off his head on opium, which he took for his dysentery, gout and toothache. Opium was then a readily available painkiller (even given liberally to children) and often mixed with beer or confectionery, or else it was simply there in a jug on the counter. For Coleridge, it allowed ‘a suspension of the anxieties’ as a ‘warm, druggy dusk’ descended.

As for Wordsworth, his noble cry that we should behold the majesty of this green Earth was not reflected in reality, which was ‘no dream world’.

Behind the pretty Romantic verse, real life was very different. West Country harvests were meagre and malnutrition endemic. The average height of the poor was under 5ft. Life expectancy was less than 40 and infant mortality exceeded 50 per cent.

Diet was sparse — broth made from flour, onions and water; bread and cheese; potatoes and salt. For meat, people ate badgers. Planting wheat involved prodding a hole with a stick and dropping in the seed: immensely tedious and laborious. ‘Bad teeth, skin diseases, sores, bronchitis and rheumatism were rampant.’

Beyond all of that, Britain was at war with France, prices were rising (foreign trade was blocked) and the country was full of ‘maimed soldiers and desperate widows’. Radicals were arrested. Writers, printers, booksellers and lecturers were regarded with suspicion, harassed and interrogated.

Home Office files show even Wordsworth and Coleridge were put under surveillance and the sum of £20 secretly authorised in expenses. ‘You will narrowly watch their proceedings,’ a spy, who infiltrated Alfoxden by weeding the garden, was instructed.

The conclusion was somewhat flat: ‘Despite the country’s war footing and the threat of invasion, political or military conspiracy was not the poets’ business.’