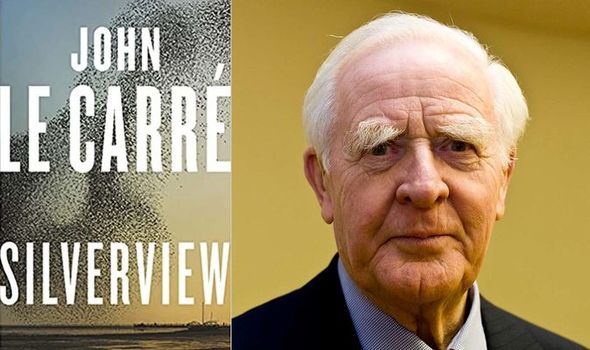 There was a book in a box. I knew that, though I hadn’t really thought about it for years. Somewhere – it wouldn’t be hard to find, because everything not actually destroyed was carefully catalogued – there was a book called Silverview, and I had made a promise once that I would finish anything left undone.

I was locked down in Cornwall in the house where my mother Jane was also dying, though she was determined not to, and our days were half-mad as she rushed us around on her behalf, looking for fragments of the books she had worked on with my father which needed to be preserved for posterity.

That was all done, of course, but she was still in some measure waiting for him to come home, and when he did the work would resume for both of them, as it always had: they would sit together and he would read aloud, annotate and cut, and she would respond, type or simply listen and absorb.

Theirs was a creative partnership, of increasing depth as time went by, and his severance from it was something part of her simply would never understand, for all that she knew it was true. They hadn’t been able to say goodbye despite being in the same hospital – she was immunocompromised and he was suffering from pneumonia.

Neither of them could be moved, and even had there not been a pandemic going on, he would have been potentially lethal to her. He died a floor away, and I was allowed in to inform her late that night. We wept together – I had no words prepared and no idea how to deliver such an appallingly cruel update, so I just said it and we fell apart. Then I had to leave her and go back to the house alone.

My brother Steve stayed on the phone all the way as I drove, stuck in his home outside Los Angeles and still doing his best to look after his father’s youngest son.

A book, then, in a box, although in the event it was a printed stack of paper waiting for me in the tall cupboard in my mother’s office, tied up with string. I couldn’t undo the knot, so I cut it, and started to read.

Silverview had been written in 2014, just after A Delicate Truth, but put aside.

No one really knows why, though I believe it was two-fold: the book was too powerful in its portrayal of a Secret Intelligence Service whose meaning was no longer clear even to itself, with no George Smiley, nor “Ned”, nor Leonard Burr, not even a lingering lamplighter to carry the flame nor a stray scalphunter to rekindle it (the surveillers, and those who carry out the dirty work for the secret service, in my father’s jargon), and whose interventions therefore might not be helping anyone, even the British government.

The book’s incidental meditation on dying was too stark and personal, especially since the death in question is awarded to a woman who, though unlike her, must stand in for my mother Jane, who passed away in February, a little over two months after her husband of nearly 50 years. Certainly as I read it, in the gloom of mourning, both actual and prospective, it seemed a perfect vision of the future I was living.

It is the story of a bookseller, Julian Lawndsley, and his friendship with a man of an uncertain past. It is the story also of a total failure of domestic security, and the desperate game of catch-up that follows. It is a thriller, a detective story, and above all a tale of sympathy, perhaps more like his earlier books – where the specific politics take second place to an overwhelming humanity – than the more recent ones.

I sat in bed and read the first half, then got up and read the second in my father’s old study. The decision he had left us about the book was easily made: we should polish it – no draft, however final, ever escapes that fate as it passes through the industry process – and we should publish it.

And when I said “we” I knew I really meant “I”, as the writer in this generation, and the sucker who had, on a long walk on Hampstead Heath, north London, with a very thoughtful and melancholic father some years before, agreed to complete any unfinished works he left behind.

My writing, under the pen name Nick Harkaway, is not like my father’s. That’s to say we have plenty in common, but we are creatures of different time periods.

I was born in 1972, which makes me, as my oldest brother puts it, the Tinker Tailor child. My first memories of seeing my father at work are of the iconic Karla trilogy.

But my own novels are rooted in the end of the twentieth century and the beginning of the twenty-first.

I am an adult of the post-Cold War world, of the digital transition, and of science and technology as part of daily life. The stories I write tend to be thought of as science fiction, though half the time I’m just dramatising things that really exist, and yet still seem strange because we haven’t caught up with ourselves.

My fourth novel, Gnomon, which came out in 2017, was supposed to be just on the edge of the possible, with technology to read minds in a police cell – but by the time the book appeared, all but one of my carefully speculative devices existed: at the end of the summer of that year, a team of scientists successfully read a passport-photo quality image directly from the brain of a chimp.

Le Carré readers needed none of that strangeness. They take their world analogue, with its madness and its villains driven by motivations you can put your finger on, and find somewhat shamefacedly in your own heart. I had to prune and tidy, but not change; not leave smudges on the glass. As a writer, that’s hard, but as a son it’s even harder. All the things that drive you mad about your old man, all the infuriating arguments you could never win when he was alive… you have to lose them again. And I did. I left the book alone, as far as I could, brushing away rubble where something was unclear, adding three lines or two to bridge a gap that was slightly too big. The product is not a hybrid; it’s all him, with me picking up the plates and quietly taking them off the table when they’re empty.

What is happening where you live? Find out by adding your postcode or visit InYourArea

Of course, I imagined I might have some beautiful spiritual moment; that I would look up from the pages I was working on and briefly see him sitting in the brown leather chair by the window; or that I’d go for a walk to clear my head and glimpse him nodding approval at what I’d done, at a debt repaid.

I never did. No friendly ghost, alas, directed my hand or rested one lightly on my shoulder. I was alone with the book. But in that there is something, after all. There was no dialogue to be had – I was sitting in his chair, doing his half of the conversation, so I could only ever be talking to myself.

But while we only rarely talked about writing directly, one of the few overt pieces of advice he ever gave me was that professional writers do the work. We show up and write when we’re too tired, too busy, too sad, too sick. We write, because that’s the job. And that, I did do, though in all honesty it occasionally hurt like hell.

So what is it, in the end, this book? What does it mean?

It is what you already know: the last complete novel of the writer John le Carré, who was born the son of a criminal and bankrupt; whose mother left him at five years old and was said to be dead; who was raised by an Irish grandmother, by crooks and getaway drivers, by a bad father with heavy hands; then by the University of Bern, which took him in as a practical runaway; by teachers, and finally by spies.

A man who never met an underdog he didn’t root for, who was angry with every lie ever told by specious politicians more accomplished in their deceptions than his conman father ever was, at the expense of ordinary people here and everywhere else in the world. It is fundamentally a book that demands you exercise your compassion, and in that it is the statement of the man.