White men’s burdens are not much in vogue these days; it would be difficult to think of a writer as firmly out of fashion as Rudyard Kipling. The very name seems to waft our way on a plume of cigar smoke. It was an oddity even in Kipling’s time. “Is it a man or a woman?” an early publisher asked, on first hearing it. (Kipling’s parents had fallen in love in Staffordshire, at a picnic on Lake Rudyard. One wonders about their second child, known as Trix.) All the same Kipling endures. In 1942, George Orwell conceded that 50 years of critical derision had hardly taken a toll on Kipling, still intact, by no means only like the “taste for cheap sweets that some people secretly carry into middle life.”

Christopher Benfey, the Andrew W. Mellon professor of English at Mount Holyoke, sets out to return Kipling not to the right side of history but to this side of the Atlantic. Like Hemingway’s in Havana or Joyce’s in Zurich, Kipling’s American years make for a fertile foreign chapter. They yielded the bulk of his most popular work. Benfey eloquently argues not only that Kipling’s engagement with the United States made him the writer he became, but that he lavishly returned the favor.

As a child, Kipling fell under the spells of Emerson and Bret Harte; he soon discovered Whitman, Longfellow and Twain. It was in large part to pay homage to the last that he first ventured to America, in 1889. The mission was not so simple; “the landing of a 12-pound salmon was nothing to it,” he wrote afterward. The 23-year-old reporter from an unknown Indian newspaper nonetheless managed a triumph, securing a two-hour, two-cigar interview with the esteemed author. In a lovely bookend, the writers would reunite 18 years later when, in scarlet gowns and mortarboards, wilting through a slow-motion conferral of honorary degrees, they ducked out of an Oxford theater for a smoke.

Kipling’s star by that time burned more brightly than Twain’s, based on what he had produced over the decade following the Elmira, N.Y., cigars. The American borrowings began early: a line of Longfellow here, a whole story of Harte there. To them, Kipling added another essential ingredient: In London in 1891 he met and courted a young American. The two married quickly, in what Henry James, who gave away the bride, described as “a dreary little wedding.”

Before heading off on an around-the-world honeymoon the couple impulsively purchased 10 acres of land in Brattleboro, Vt., where Carrie Kipling’s family had settled generations before. They had in mind an eventual vacation home. Months into the epic wedding journey, a bank failure swallowed the couple’s savings. Flat broke, expecting a child, they retreated to Vermont, where work began immediately on what we know today as “The Jungle Book” and the first of the “Just So Stories.” In the dream house the couple built in Brattleboro, Kipling wrote “Captains Courageous” and an early draft of “Kim.” He who had once made starry-eyed pilgrimages now received them. Owen Wister turned up, as did Frank Doubleday, as did Arthur Conan Doyle, with a set of golf clubs, to the consternation of the locals.

If you are wondering how Kipling went from flat broke to building his dream house seven pages later, the answer is literary success, a matter on which Kipling lingers longer than Benfey. He had managed a meteoric rise, one without rival since Dickens. With fame arrived her more seductive cousin, privilege. As many as 200 letters landed daily in Kipling’s mailbox. To avoid the long trip into town, he petitioned for and was granted a personal post office. With the young Theodore Roosevelt, Kipling visited the National Zoo, his favorite Washington address. He spent days with the beavers, admiring their “colonial world in miniature.” (Kipling was at work on “The Jungle Book” at the time.) It struck him that celebrity “was beginning to be worth something” when the zookeepers fitted feeding times around his schedule.

Kipling argued with Roosevelt about the plight of the American Indians; he could not square their fate with the city on the hill. Nor could he see why a country that had eliminated the original Americans was repopulating itself with riffraff. He never lost sight of the brutality, the ruthlessness of American life, which found its way into “The Jungle Book.” (With its congenial wolves as exemplary parents, the volume became a favorite of Freud’s.) Benfey nimbly analyzes the cross-pollinations: Mowgli’s ideal family may have been inspired by Emerson. “Self-Reliance” is recast in “If,” the poem Kipling was to say escaped its bindings “and for a while ran about the world.” It too had an American accent, originally having been attached to a story about George Washington. Kipling shaped the thought of William James, with whom he worked out the themes of “Captains Courageous.” 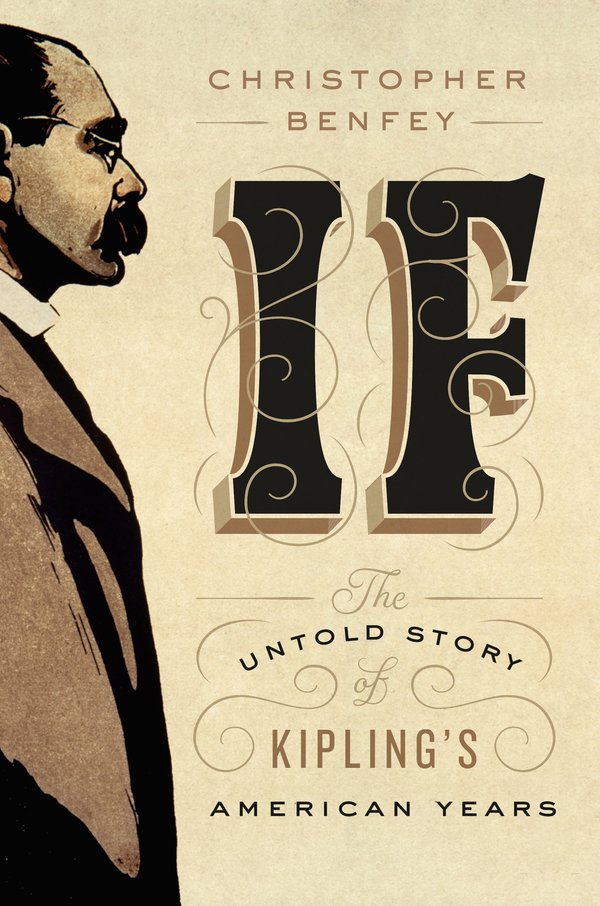 Kipling never wrote the Great American Novel, as he promised he would. Arguably he delivered something better. With “Kim” Benfey suggests he invented a genre; out of his overcoat tumble Ian Fleming and John le Carré. It is an unexpected literary genealogy, though perhaps one might well have guessed that Smiley descended from a transparent eyeball. “Kim” would become mandatory reading for C.I.A. operatives in the 1960s. Benfey has the Vietnam War fought “according to Kipling rules.” Another of his works lodged at a different altitude in the American firmament. To “The Jungle Book” we owe both “Where the Wild Things Are” and “Tarzan.” He made peace, of a sort, with Edgar Rice Burroughs: “He was reported,” Kipling noted, “to have said that he wanted to find out how bad a book he could write and ‘get away with,’ which is a legitimate ambition.”

To extract the American years from Kipling’s life is no easy feat. He might one minute be driving his carriage to Brattleboro, smoking opium in Lahore the next. There is a reason he specialized in characters torn between worlds. It is not Benfey’s fault that Kipling flies about in reckless disregard of his subtitle, but it does at times make for something of a disjointed narrative. One gets the sense of a subject straining at his leash, unhappily confined, stubbornly untamed.

Meanwhile the mysteries accumulate. We get little sense of Kipling’s actual presence; why did he strike Henry James as “the most complete man of genius” James had known? Not for my life could I speak to the Kipling marriage. Out of the blue comes a violent confrontation with Carrie Kipling’s feckless brother, a collision that sends both men to their lawyers. A trial ensued, depressing Kipling, the less popular character in the courtroom, where he appeared a “priggish killjoy.” Benfey has him leaving abruptly for England as a second hearing approached. The family would return for a brief visit in the wake of the Spanish-American War, when Kipling urged Roosevelt to make the Philippines an American colony — here came “The White Man’s Burden,” with which he pressed his case — and when the couple lost their 8-year-old daughter. “I don’t think it likely that I shall ever come back to America,” Kipling wrote that July, 1899, and he did not.

From Canada eight years later he would marvel that “safety, law, honor and obedience” reigned on one side of the border, “frank, brutal decivilization” on the other. He remained always the man who dressed for dinner in Vermont, as if to keep the howling wilderness at bay. It was not lost on him that the locals believed he had profited from America without demonstrating sufficient gratitude to the country. Benfey reminds us of our debt to a category-demolishing, globe-striding man who indeed contained multitudes, the author of an immortal ode to equanimity who fled America because of a sordid brawl with his brother-in-law.

Stacy Schiff is the author, most recently, of “The Witches: Suspicion, Betrayal and Hysteria in 1692.”