THE CROWDED HOUR
Theodore Roosevelt, the Rough Riders, and the Dawn of the American Century
By Clay Risen

It is almost impossible to write a book in which Theodore Roosevelt plays a supporting role. If he’s in it, he’s the star. Roosevelt’s ability to take over a story is all the more remarkable because none of the 20th century’s most defining events — from international economic depression to ideological revolutions to devastating world wars — took place during his presidency. Even today, 100 years after his death, it is less Roosevelt’s achievements that we remember than the sheer force of his personality. 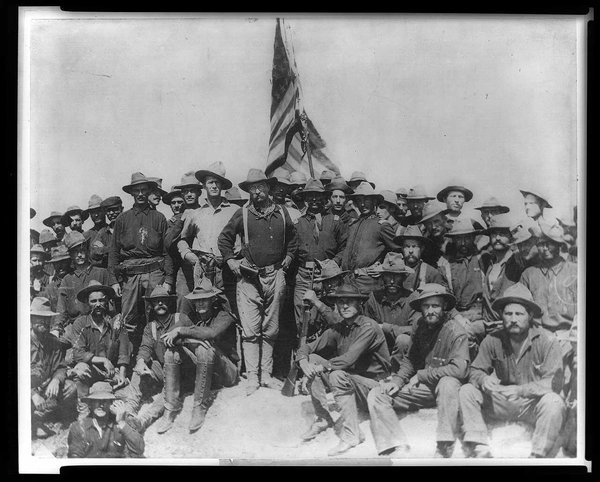 “The Crowded Hour” is a rare exception to this rule. In Clay Risen’s fast-paced, carefully researched new history of Roosevelt’s regiment of Rough Riders, which dazzled Americans during the Spanish-American War, the future president may be in the thick of the action, but he does not monopolize the story, quietly stepping aside for long stretches of time. In his place appears an irresistible cast of characters, from a unit of fearless black soldiers to the swashbuckling artist Frederic Remington, the novelist Stephen Crane and the legendary journalist Richard Harding Davis, whose hagiographic articles would make the Rough Riders not just famous but iconic. It quickly becomes clear, however, that the book’s central character is neither Roosevelt nor any of these men. It is the brash young country they dared the world to dismiss.

To its citizens and admirers, the United States “had never been just a country,” Risen writes, “it was an idea too.” Carefully constructed, brutally contested, boldly if imperfectly embodied, this singular idea had stirred widespread hope that liberty and equality might be possible, even contagious. More than a century after winning its independence, however, the United States had yet to turn its fame into what it really wanted: respect. In the eyes of much of Europe, the country still seemed like “a hypertrophied child,” Risen argues, “with astounding economic growth and resources, but without the maturity to play a role in world affairs.”

When Cuba launched a war of independence in the winter of 1895, reviving its longstanding struggle against Spain, Americans immediately took notice. Most sympathized with the island, seeing in its fight for independence a reflection of their own, but others saw something more: an opportunity for the United States to claim its rightful place on the world stage. If America wanted to be taken seriously, no tactic was faster or more effective than war with a European power.

Although President McKinley had hoped to avoid interfering in Cuba, less than a year after his inauguration the United States warship Maine exploded in Havana Harbor, killing 266 men and making it nearly impossible for him to resist the deafening call to war. In the 121 years since that fateful night, historians have yet to find any definitive evidence that the Spanish blew up the Maine. On the contrary, the overwhelming verdict is that it was an accident. At the time, though, there was little doubt in most Americans’ minds, certainly none in Roosevelt’s, that the Spanish were to blame. When Roosevelt, then an assistant secretary of the Navy and already spoiling for a fight, heard the news, Risen writes, he “grinned, and shouted, and declared that war with Spain had finally arrived.”

As soon as the war began, Roosevelt resigned his post and began lobbying to form his own regiment — quickly termed the Rough Riders. Unnerved by his friend’s eagerness “to fight and hack and hew,” the historian Henry Adams, heir to his own political dynasty, wrote, “I really think he is going mad.” Roosevelt didn’t care. He wasn’t interested in idle intellectuals. He wanted men who were ready to fight, and there was no shortage of those.

The Rough Riders received enough applications to fill 27 mail sacks, and the variety was even more astonishing than the quantity — East Coast college students, West Coast cowboys, lawyers, tennis players, football stars, gold miners. Together, these men would endure the bloodiest battles of the war, from Roosevelt’s “crowded hour” on Kettle Hill to the Battle of Las Guasimas. Following Roosevelt’s lead, they were always the first to charge.

Risen, the deputy Op-Ed editor at The New York Times, is a gifted storyteller who brings context to the chaos of war. “The Crowded Hour” feels like the best type of war reporting — told with a clarity that takes nothing away from the horrors of the battlefield. Although Roosevelt miraculously survived the Battle of San Juan Hill, many of his men did not: 89 Rough Riders were killed or wounded that day. Those who survived were haunted by the sight of so many broken bodies, not just those of their friends, but of their enemies as well. “So help me God, they looked like kids about 12 years old,” one man remembered. “It was pitiful.”

Risen’s final verdict on the Spanish-American War is not admiring — “a half-baked, poorly executed, unnecessary conflict that pushed an immature military power onto the world stage.” He does concede, however, that it had the desired effect. After Spain gave Cuba its independence and also turned over Puerto Rico, Guam and the Philippines to its enemy, the United States was never ignored again. The danger for Roosevelt was that the war might conceivably have had the opposite effect on his own trajectory. “Of course,” Henry Adams wrote at the time, “this ends his political career.” Instead, it vaulted him into the national spotlight, a brave young man bristling with energy and arrogance, as unforgettable as the country he would one day lead.

Candice Millard is the author, most recently, of “Hero of the Empire: The Boer War, a Daring Escape, and the Making of Winston Churchill.”

THE CROWDED HOUR
Theodore Roosevelt, the Rough Riders, and the Dawn of the American Century
By Clay Risen
Illustrated. 355 pp. Scribner. $30.