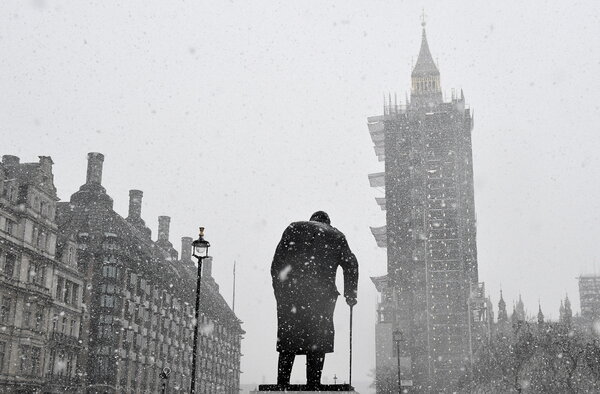 During a protest over the killing of George Floyd last year, demonstrators in London targeted the famed statue of Winston Churchill in Parliament Square. Underneath his name someone had spray-painted the words “was a racist.” To guard against further damage, the government temporarily boarded up the statue, drawing a rebuke from Prime Minister Boris Johnson, a self-styled Churchill acolyte, who declared that “we cannot now try to edit or censor our past.”

In his new book, “Churchill’s Shadow,” Geoffrey Wheatcroft takes a literary spray can to the iconic World War II leader, attempting metaphorically at least to recast the many memorials and books devoted to Sir Winston over the years. Churchill, in this telling, was not just a racist but a hypocrite, a dissembler, a narcissist, an opportunist, an imperialist, a drunk, a strategic bungler, a tax dodger, a neglectful father, a credit-hogging author, a terrible judge of character and, most of all, a masterful mythmaker.

On both sides of the Atlantic, we are living in an era when history is being re-examined, a time when monuments are coming down and illusions about onetime heroes are being shattered. When I was a correspondent in Richmond a quarter-century ago, it would have struck me as unthinkable that the statue of Robert E. Lee on the city’s Monument Avenue would be removed, but the old general has been taken away, as have his Confederate brethren. Now even the likes of Lincoln, Washington and, yes, Churchill are under scrutiny if not attack.

Whatever we think of aging statues, we constantly edit the past, re-evaluating people and events through the lens of our current times. Sometimes that is overdue and sometimes it goes too far. None of our historical idols were as unvarnished as the memorials we build to them. The question is: What are they being honored for? Which contributions to history do we celebrate?

Lee may have been a military genius, but his contribution was leading a rebellion that tore apart his country to defend a system that enslaved millions based on the color of their skin. Celebrating him in the time of George Floyd became, at last, untenable. Churchill, on the other hand, has been venerated despite his manifest flaws, not because of them. Statues in Parliament Square and elsewhere are meant to remind us of his finest hour, not his darkest ones.