Some of us are more observant than others. For example, in my half-century in New York City, I have ridden the subway perhaps 15,000 times. Most of those trips have disappeared from my memory. After all, I usually see nothing more than the backsides of the people standing directly in front of where I’m sitting or the gap I’m trying to mind as I get on or off. I never noticed the Metropolitan Transportation Authority Arts and Design program, which since the 1980s has been commissioning notable artists to create works that embellish otherwise bland subway stations. But in 2012 I took a tour of such installations.

Afterward, my perception of the underground world where I had spent so much of my life was transformed. Earlier, I had not really noticed even the large Roy Lichtenstein mural in the Times Square station. Now, I understood more what Sherlock Holmes told Dr. Watson about the difference between just seeing and actually observing. The idea is to understand and to go beyond seeing into the realm of observation.

This is the focus of a new book, “The 99% Invisible City: A Field Guide to the Hidden World of Everyday Design,” by Roman Mars and Kurt Kohlstedt, who are the creators of a podcast about design called 99% Invisible. Compiled from episodes of their show, which has gained millions of listeners over the past 10 years, the book introduces us to mysteries that most of us have never considered. Why are manhole covers round? Why do the Japanese infuse them with elaborate decorations? What do painted yellow symbols on streets tell us? Why are traffic lights red on top and green on bottom? What might we notice about the designs and support systems of buildings and bridges? Why have so-called love locks or love padlocks become a problem around the world? Why are some streets straight and others curvilinear?

Mars and Kohlstedt explore the mysteries behind certain buildings, like the Citicorp Building, which opened in 1967 at 53rd Street and Lexington Avenue. The enormous structure is dramatic because it seems to be balanced without adequate support on the ground. It had a hidden design flaw.

Diane Hartley, an architecture student, wrote a term paper on the building after it was finished. She determined that the calculations that justified its particular design — with single supports carrying the weight of the structure — were wrong and that under certain wind conditions the giant building would fall, possibly killing thousands of occupants. The architects who designed it reluctantly confirmed her findings that the structure was a catastrophe waiting to happen. What to do? The response of the owners, the bank and the architects is almost as stunning as the original mistake. Rather than order immediate evacuation, the decision was to continue to operate as usual, to inform as few people as possible and to repair the building without arousing suspicions. Mercifully, nature cooperated, the powerful wind that might have toppled it did not materialize while the structure was being reinforced and it continues to stand. Meanwhile, you can only wonder what might have happened if a graduate student had not decided to observe rather than just to see. 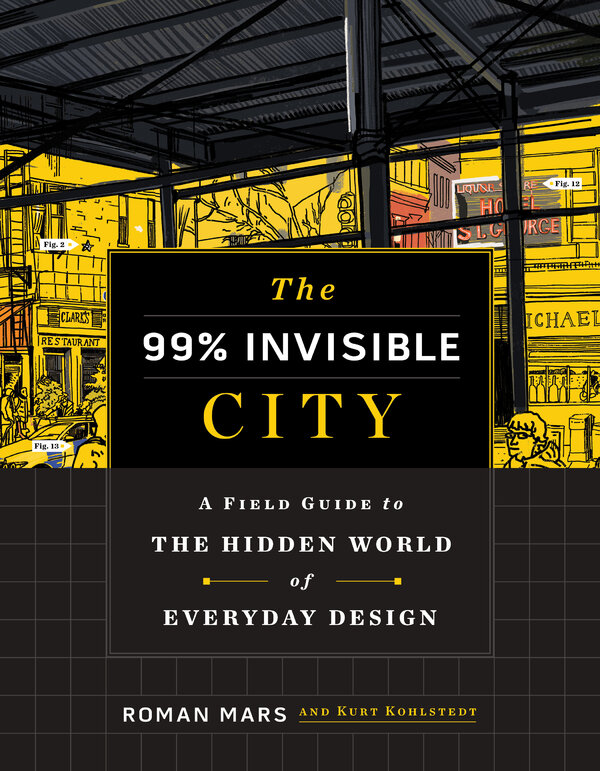 Fake facades are another example of what the authors have in mind when they describe looking past the surface of things. Brooklyn Heights, for example, is renowned for its 19th-century rowhouses. At first glance, the home at 58 Joralemon Street is just another Greek Revival residence in a row of similar structures. But the house’s facade masks an empty interior. Its purpose is to provide an escape route from the subway below in case of an emergency.

“The 99% Invisible City” is filled with hundreds of such fascinating tidbits, often hard to find in what could have been a better-organized book. Consider Theophilus Van Kannel, whose design for the revolving door created an opening into buildings that exchanged eight times less air than typical swinging doors. This has been an enormous aid to environmental efficiency. Unfortunately, revolving doors had serious drawbacks, as when the tragic Cocoanut Grove nightclub fire in Boston during World War II took 492 lives, as panicked patrons crowded at both sides of a revolving door, preventing it from opening and thus trapping hundreds of terrified people inside the club. Most building regulations now require that revolving doors be flanked by regular doors on both sides.

We learn that Hugh DeHaven figured out how to make cars less dangerous by designing collapsible steering columns that would ultimately save thousands of lives. Similarly, concrete Jersey barriers, ugly as they may be, are designed to force automobiles back onto the streets and have saved countless others. And who knew that on Sept. 3, 1967, at precisely 4:50 a.m., the entire nation of Sweden changed lanes from driving on the left side of the road to driving on the right?

A brief review cannot do justice to such a diverse and enlightening book. The authors have sections on oil derricks, cell towers, the Postal Service, water fountains, the transcontinental telegraph, cisterns, telephone poles, emergency exits, cycling lanes, archaeological sites in Britain, national roads, zero markers, the Oklahoma land rush, cemeteries, public lighting, pigeons, raccoons and half a hundred other eccentric topics. I wish more attention had been paid to sewers and water systems, street paving materials, burial regulations, power generation, zoning, or ferries and waterfront services. And they might have included photographs rather than line drawings to better illustrate their points.

But “The 99% Invisible City” is altogether fresh and imaginative when it comes to thinking about urban spaces. In a time when we question whether it is perhaps the moment to tear down statues of flawed historical figures, to attach new plaques to buildings or to change the names of military installations and college dormitories, the authors are asking us to observe carefully the monuments and symbols that are everywhere around us. Mars and Kohlstedt would urge that we be more observant as we encounter the hidden city in the years to come. As Jonathan Swift is supposed to have said, vision is the art of seeing what is invisible to others.