The secret love Beethoven took to his grave: He was a brilliant but broke bachelor who chose brothels over marriage – but one woman did capture Ludwig’s heart, his Immortal Beloved, whose identity remains a mystery

Beethoven: A Life in Nine Pieces

What would Beethoven have made of the fact that the global celebrations of the 250th anniversary of his birth were kiboshed by a nasty microscopic virus from the East?

Well, judging by this elegant little study, he would have shaken his fist at the injustice of it all — and the lack of some massive and always much-needed royalties — before pouring himself a glass of wine and smiling at the joke of it.

You don’t have to be a music scholar to enjoy this brilliant, and pleasingly concise, book. But, if you don’t love Beethoven, both the man and his music, when you start, you should by the time you finish.

It’s not a conventional biography: Laura Tunbridge, an eminent professor of music at Oxford, has taken nine pieces of music and uses each one to illustrate a key theme of his life — from Heroism (the No 3 Eroica symphony of course), to Liberty (the opera Fidelio), and Spirit (the mighty Missa Solemnis). 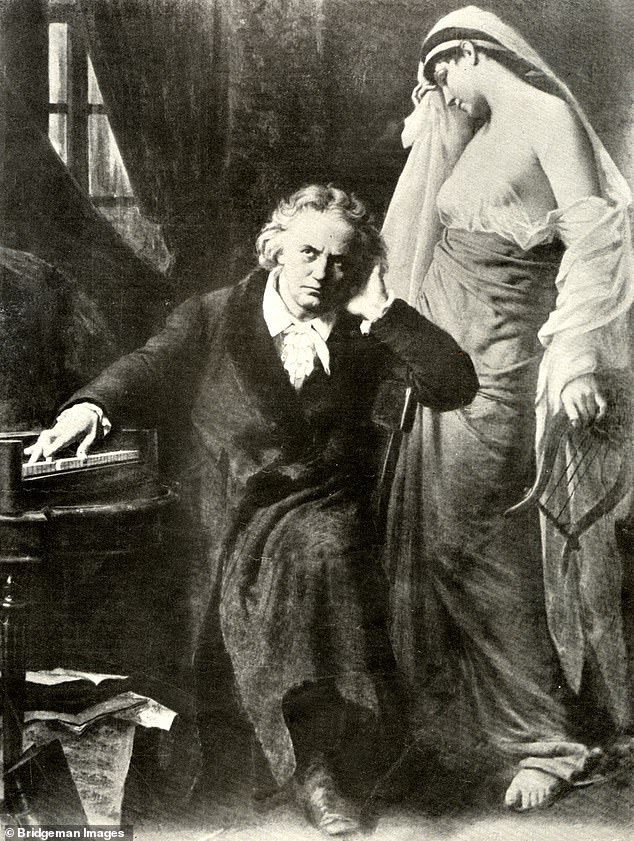 Beethoven: A Life in Nine Pieces by Laura Tunbridge, a professor of music at Oxford, sees the author take nine pieces of music and uses each one to illustrate a key theme of Beethoven’s (pictured in a portrait) life

Around those themes, she fills in the story of his life, his family and friends, the history of the age, even developments in instrument making. If it means anything, I had to listen to each of the pieces while reading that chapter — it’s that kind of book.

We think of Beethoven as the grumpy, irascible, romantic genius who, by the time he died, was the most famous composer in the world. And, of course, tragically, heart-breakingly deaf; a man who had to be turned round so he could see the audience applauding wildly at the premiere of the Ode to Joy, the Ninth Symphony.

Irascible yes, and argumentative: shortly after the premiere of the Kreutzer sonata in 1803, written for his friend, the brilliant Afro-European violinist George Bridgetower, the pair went out to celebrate in Vienna with a few drinks. It seems they fell out in a fight over a woman who the composer had his eye on. But they made up, as friends do. And the composer had many friends.

Grumpy? That’s not so certain: he’s thought of as permanently scowling because most portraits are based on a famous life mask by a sculptor called Franz Klein, who covered the composer’s face in oil and then plaster, which when dried would give the mould. 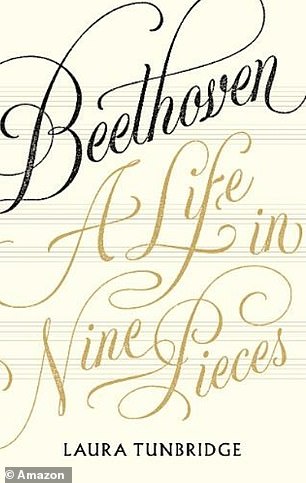 Around those themes, Ms Tunbridge (above is her book) fills in the story of his life, his family and friends, the history of the age, even developments in instrument making

It sounds a ghastly experience and Beethoven had to breathe through straws in his nostrils. No wonder he looks grumpy, as anyone who has had a Covid test would agree.

He loved his coffee, too, never starting a day without making a special mug of his own — carefully counting out 60 coffee beans. It was expensive and the equipment didn’t come cheap. Then down to work, and how he needed that coffee.

His output was prodigious and he premiered two symphonies, the Fifth and the Sixth, and the fourth piano concerto in one concert.

Beethoven was born in Bonn, Germany, and, at the age of 11, was already a musical prodigy. But it is Vienna, the musical capital of the world and home of Mozart and Haydn, where he really made his name.

As someone once remarked, it was the Austrians’ great skill to persuade the world that Hitler was German and Beethoven Austrian, rather than the other way round.

So here is Beethoven in his early 20s in Vienna, a vibrant city of palaces and princes, peers and patronage.

A musician couldn’t ply his trade without some nobleman supporting him. Beethoven could play the field as well as the next man.

Like any hard-working musician, always — in Prof Tunbridge’s words — ‘strapped for cash’, he knew that his celebrity and genius would embellish the reputation of anyone.

For the young Beethoven, Europe at this time was a swirling mass of revolutionary and radical fervour. The French Revolution was not so long ago, and the Napoleonic wars were sweeping across the continent. 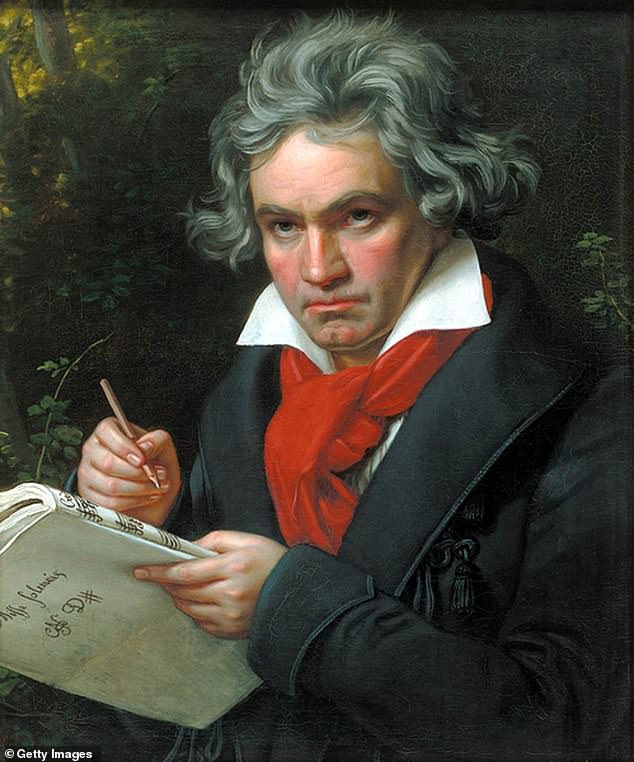 The mystery of the Immortal Beloved, the woman who was the subject of Beethoven’s (above) famously passionate and unsent letter, has beguiled the world for nearly 200 years. The letter was discovered only after his death, and it’s not known when he wrote it

Vienna’s hospitals were full of injured soldiers from the Austrian and Russian armies. Ms Tunbridge brilliantly explores the relationship between the revolutionary music of the Eroica Symphony (No 3) and the revolutionary flavour of the times.

He was fascinated by Napoleon and saw himself as the musical equivalent, both titans of their age. He was initially determined to dedicate the Eroica to Napoleon but, when the little Frenchman was crowned emperor in 1804, Beethoven declared ‘Now he will trample on all the rights of man…’ And he tore up the dedication page.

Anyway, as Prof Tunbridge suggests, the real hero of the Eroica was Beethoven himself. In a long letter to his brothers, only discovered after his death, he explains why he might seem ‘malevolent, stubborn or misanthropic’. He was losing his hearing. The year was 1802 and it’s painful to read now: ‘My misfortune is doubly painful to me because I am bound to be misunderstood . . . I must live almost alone like an exile.’ Only his art kept him going.

He was a bachelor all his life — though very fond of female company finding a wife was tricky: he was always falling for married women, and, says Ms Tunbridge, had to frequent the city’s many brothels — so the mystery of the Immortal Beloved, the woman who was the subject of his famously passionate and unsent letter, has beguiled the world for nearly 200 years. The letter was discovered only after his death, and it’s not known when he wrote it. 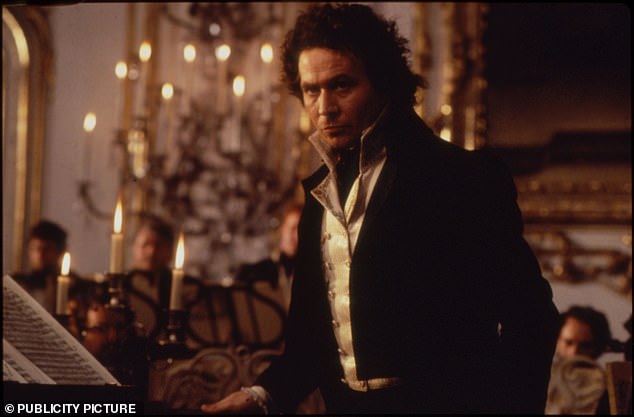 It was even the subject of a powerful film, Immortal Beloved, with Gary Oldman (pictured above) as Beethoven

It was even the subject of a powerful film, Immortal Beloved, with Gary Oldman as Beethoven. But who was she? ‘My thoughts rush to you, my Immortal Beloved, now and then joyfully, then again sadly . . . To face life I must live with you or not at all . . . ’

And much more in that vein, breathless and overwrought. Prof Tunbridge runs her eye over the field without coming to any conclusion.

The fact that there were so many candidates shows Beethoven was popular in more ways than one. But some puzzles are best left unsolved.

And, in the end, it is the music that encompasses us all, from the surging, enveloping richness of the middle period, to the more spare, thoroughly modern late chamber pieces. It is music that doesn’t belong in a court or a palace; it’s about real life and the real world, whether you are listening in the concert hall or whistling the tunes as you walk.

You don’t need to be musical to understand Beethoven, to feel the majesty, the greatness, the universality: whatever you do, wherever you are, you will be stirred by his overwhelming stream of sound.

His last words were typical, expressing disappointment that the wine he had hoped for had only just arrived: ‘Pity, pity, too late.’ He then fell into a coma for two days before a violent snowstorm erupted. Beethoven briefly opened his eyes, and clenched his fist, defiant to the end.

So, how pleasing it is that, at a time when statues are the preferred currency of angry minorities baying for blood, Beethoven’s birthplace chose to mark the anniversary this way: in an installation called Ode to Joy, 700 waist-high, brightly coloured statues of the composer were installed around the Beethoven monument in the centre of Bonn.

The man himself would have loved the project’s success — not least because there was a huge rush to buy one, and Beethoven was always aware of the need to make a buck.

More importantly, perhaps, as Ms Tunbridge points out at the conclusion of her dazzling book, this Beethoven wasn’t scowling: all the statues were smiling.