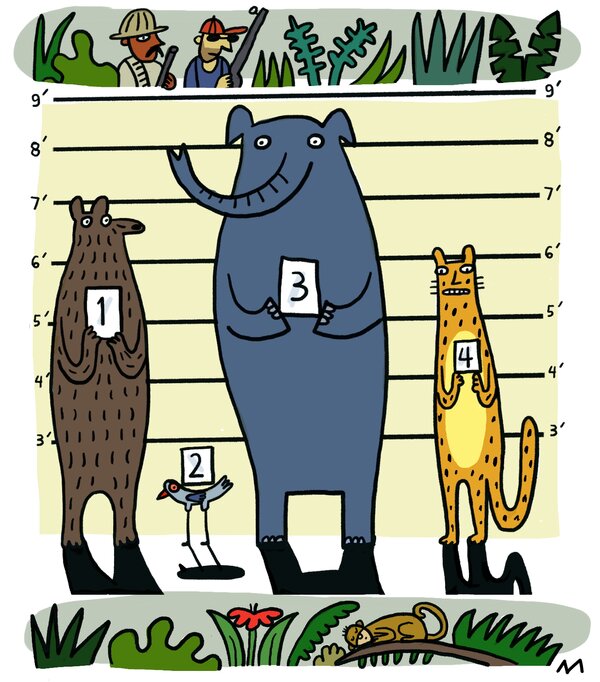 FUZZ
When Nature Breaks the Law
By Mary Roach

The author Mary Roach made her reputation for witty, quirky and sometimes gross science writing in a series of snappily titled books: “Stiff” (about dead people), “Gulp” (the digestive tract) and “Bonk” (sex), to name a few. In “Fuzz,” her latest, the subject is the tricky terrain where humans and wildlife overlap and often collide.

The book’s subtitle, “When Nature Breaks the Law,” is a stretchy enough concept to cover a variety of situations. Especially when the “law” Roach invokes is that of human-made rules applied to nonhumans. This allows her to explore spots around the world or dive into the archives — wherever her curiosity takes her. The book doesn’t come off as comprehensive, but it does make for an idiosyncratic tour with Roach as the wisecracking, ever-probing guide.

Examining our sometimes fraught meetings with nature, “Fuzz” includes chapters on the kinds of big, imposing animals readers might expect — bears, mountain lions, leopards, elephants — but also some surprising choices, like killer trees falling on people, “terror beans,” and mice and rats. Roach drops in on a varied cast of experts: a monkey catcher in Delhi, a pope-appointed bioethicist, a cougar tracker, with visits to the Vatican, a tea plantation in India, a casino complex in Reno, Nev.

Roach delights in the disgusting details of science. For those of us with, ahem, a taste for scatological humor, she delivers the story of a gull in a crowded nesting area that managed to defecate directly into the mouth of a hooded student. Elsewhere, she tells us that, “poundage aside, the Canada goose is a frequent crapper.” Rat droppings found all over her balcony at the decrepit lodge in India mystify her. What is the appeal for them? There’s no food, and not much of a view. She concludes: “It appeared to be simply the place rats go to have a dump.”

We also learn of something called the “fecal harness,” a contraption to collect animal waste — “a sort of feed bag in reverse.” Wildlife excrement furnishes huge amounts of information for inquiring naturalists, whose analysis has come a long way. In the bad old days, “if you wanted to know what a species was eating, you opened a few hundred stomachs,” Roach writes. A paper on screech owls from 1900, for example, lists the contents inside 255 owl innards. Reading about all that killing made her tired and sad, Roach writes, but she also found it “vaguely festive” thanks to the “Twelve Days of Christmas style” presentation: “91 stomachs contained mice … 100 stomachs contained insects,” and so on.

This is a mild example of some of the jokes that made me cringe — the ones that riffed off anecdotes of animals being killed. I think for Roach, it might be gallows humor, a way to lighten the moment for her own sake as well as the reader’s.

She’s clearly not callous. Take for instance another scene she could have milked for its comic value, but has chosen not to: She is hanging out with Stewart Breck, a wildlife biologist in Colorado who specializes in human-animal conflict for the National Wildlife Research Center (“the research arm of Wildlife Services, which is part of the United States Department of Agriculture,” Roach explains). She has learned that when there is edible trash, local bears are often attracted. Garbage eaters become used to humans, however, and bears that are familiar with people get in trouble. And trouble, often enough, means the bears are “lethally removed.” So, in Aspen, when Roach sees a snacking bear run up the steps of a “swank mini-mall,” she knows it’s not as funny as it looks: “Ordinarily, I would take delight in the optical non sequitur of a bear standing in front of a Louis Vuitton boutique. This poor goober with the burrata on its snout, innocent and utterly unaware of its likely fate, makes me want to cry.”

There is much conflict in managing wildlife conflict. As Roach points out, Breck walks an unenviable line. “There are old-schoolers at Wildlife Services who hate him for rocking the boat,” she says, “and there are animal welfare activists who hate him for not rocking it hard enough.” Roach characterizes the “services” as mainly provided to farmers and ranchers “who are having problems with wildlife cutting into their livelihood, and often they take the form of killing that wildlife.” Breck’s job is to research nonlethal alternatives.

One of the toughest passages in the book concerns efforts to rid Midway Atoll in the Pacific, where the United States built a naval station, of thousands of nesting albatrosses in order to safeguard planes from colliding with them. Beginning in 1941, Roach reveals, various campaigns sent hundreds of men out for hours a day, “hitting albatrosses on the back of the head.” At one point, about 80,000 birds were killed. Yet more nesting birds came back the next year. In the 1950s, the husband-and-wife team of Hubert and Mable Frings, scientists from Pennsylvania, were recruited to help. Might distress cries from the birds be recorded and played later to scare others away? But Hubert, who would come to love and respect the birds’ “independence and jaunty ways,” reported that Mable’s audio recording captured no such cries, since the birds “mostly sat quietly in place until clubbed.” The only distinctly sad sound on the tape, Roach tells us, is the voice of a young sailor forced to do this work: “I didn’t join the Navy to crush the heads of innocent birds,” he cries out. (The atoll is now a protected sanctuary for albatrosses, among other creatures.)

Often, human interventions don’t work or even make things worse. For instance: Research shows that scarecrows may actually attract birds. And according to the conservation expert Vidya Athreya, relocating or translocating problem leopards in India makes attacks on humans more likely. The leopards lose their fear of humans during captivity, and once they are moved into unfamiliar places, they become more aggressive.

There isn’t an endlessly reproducible solution for peaceful coexistence between human and nonhuman animals. There are differences in tolerance levels among different cultures. And we can glean something from the insight and compassion of others.

My favorite moments, ultimately, weren’t the funny ones, but those that reveal a bit of scientific poetry. For instance, when Roach describes how the vision of a deer is different from our own: Because of their ultraviolet perception, “while we struggle to see detail in a purply dark dusk, a deer sees it clearly in a bright blue. Our twilight is their noon,” she writes.

Or when she highlights thoughts from those who, despite sustaining loss from animals, never become hateful. A woman named Padma, who sells grain in a shop in North Bengal, was asked about the elephant that, the week before, had eaten some of her inventory. She felt angry at the authorities who owed her compensation, but would she or others want the animal killed? “Why would you kill a god?” she says, invoking the elephant-headed Hindu god Ganesh. “We just say, ‘Namaste and please go away.’”