Why is there so little sense of guilt in Germany for the events of 1939-1945? Part of the answer lies in historian Florian Huber's book, originally published in Germany in 2015, that conducts a rare examination of the role of ordinary Germans in the period leading up to the war and during the war itself. 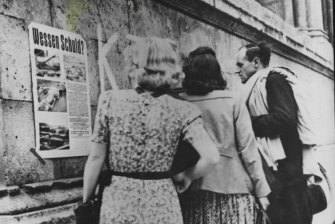 German civilians in Munich look at a poster displaying pictures of atrocities at Nazi death camps under the heading ‘Whose guilt?’.Credit:

This story is much broader than the title suggests, although it begins in April 1945 in the small town of Demmin – normally with 15,000 inhabitants but perhaps doubled at that time with German refugees.

Located in the north-west corner of Germany, it was in the immediate path of the rapidly advancing Russian forces. The town was occupied by the Russians and substantially burnt down, during which time somewhere between 600 and 1000 of its population committed suicide, although many of these were children technically murdered by their parents before the parents killed themselves. As in other parts of Germany occupied by the Russians, the rape of local women of all ages occurred on a huge scale.

Promise Me You'll Shoot Yourself  contains many harrowing accounts of these deaths through the eyes of a number of townspeople who later recorded what they saw, although it makes the point that more than 50 per cent of the vote in Demmin in 1933 was for Hitler's party. It also notes that over the preceding four years approximately 14,000 Russian soldiers and civilians had died at German hands every single day.

These kinds of suicides towards the end of the war as Germany was invaded on both sides were not confined to the east but also took place – to a much lesser extent – in the west, where the occupying troops were largely British or American. 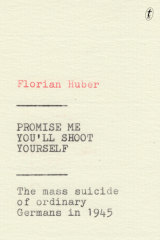 There was, however, a considerable number in Berlin, which was initially taken by the Russians. Hitler set the example himself and was followed the next day by the Goebbels, who killed their six children with cyanide before poisoning themselves.

As Magda Goebbels said in her last letter: "Our glorious idea is ruined, and with it everything beautiful, admirable, noble and good that I have known in my life. The world that will come after the Fuhrer and National Socialism won't be worth living in, so I have taken the children with me. They are too good for the life that will come after us …"

One in 10 army generals took the same course.

The book then goes back to the years before the war to examine how Germany came to this pass. Again, it records the stories of several individuals to bring a personal quality to the rise of Hitler.

There is no doubt that many Germans considered that the country had been very badly treated after the Great War in the peace settlement determined at Versailles. Paradoxically this was largely a product of the fact that there had been an armistice and not an unconditional surrender at the end of the war, and there had been no occupation of Germany by foreign troops. This enabled many Germans to believe that the war had never been really lost on their side.

Many accounts of this period seem to proceed on the basis that the German state was captured by a small minority of Nazis, but the reality is that in April 1933 Hitler's party had 2.5 million members and some of its rallies attracted numbers of 140,000. There is ample film from the 1930s of Hitler being driven through streets densely packed with cheering crowds and there was no lack of enthusiasm in the general population in the early years of the war, when much of Europe collapsed quickly before the Germany army. 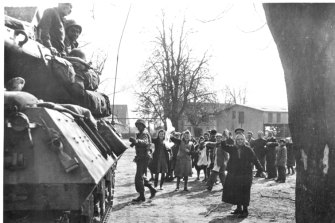 Huber quotes a young woman student and member of the Hitler Youth who went to Poland soon after it had fallen to the Germans: "I said to myself, if the Poles were fighting with all possible means not to lose the disputed eastern provinces that the German people claimed as 'Lebensraum', then they remained our enemies and I saw it as my duty to suppress any private feelings that conflicted with political necessity."

As the book makes clear, it was impossible for German soldiers to be unaware of the mass killing of civilians by special units in the east, and for civilians at home to be unaware of the existence of death camps in nearby locations. Nevertheless, there was very little retribution by the Allies at the end of the war. A handful of German leaders were tried in Nuremberg, while most military and administrative officials quickly resumed their old roles. And, as the author notes, many ordinary Germans considered themselves to be the chief victims of the war.

This notion has been encouraged on occasions by British and American commentators, who have accused the allies of war crimes because of their bombing of German cities such as Dresden and Hamburg that resulted in considerable loss of civilian life. This was at a time, of course, when the inhabitants of cities in England were being killed in large numbers by German bombs. The Germans could hardly be surprised when the other side responded in kind.

Florian Huber's book is a valuable contribution to understanding how Germany was responsible for some of the most terrible events of the last century.