Winston Groom, a Southern writer who found a measure of belated celebrity when his 1986 novel, “Forrest Gump,” was made into the 1994 Oscar-winning film starring Tom Hanks, died on Thursday at his home in Fairhope, Ala. He was 77.

He died in his sleep, most likely from a heart attack, his stepson Frederick Helmsing said.

Mr. Groom had published three well-regarded novels and a nonfiction finalist for a Pulitzer Prize when he wrote the book that would define him as a writer and turn the Gumpian phrase “life is like a box of chocolates” into a modern-day proverb.

“Forrest Gump” tells the picaresque adventures of an Alabama man who stumbles through contemporary American history with an IQ of 70 and a headful of folksy wisdom. The novel sold respectably and earned good reviews. The novelist and critic Jonathan Baumbach describe it in The New York Times Book Review as “a kind of defanged ‘Candide,’ an unabrasive satire of the idiocy of life in our time.”

But when “Gump” was made into a film by Paramount Pictures, it became a cultural phenomenon. Forrest Gump became, like Huck Finn and Atticus Finch, to name two other fictional Southerners, a beloved American character. His koan-like sayings — “stupid is as stupid does” and the line about chocolates (neither of which appeared as such in the novel) — entered the lexicon as “Gumpisms.”

The movie’s popularity even led to the founding of a national seafood restaurant chain, Bubba Gump Shrimp, inspired by a character who hopes to start a shrimping business.

The film grossed more than $670 million globally at the box office, earned 13 Academy Award nominations and won six Oscars, including for best picture.

The publicity made Mr. Groom’s novel a best seller long after the fact, and it prompted him to write a sequel, “Gump & Co.,” published the next year. 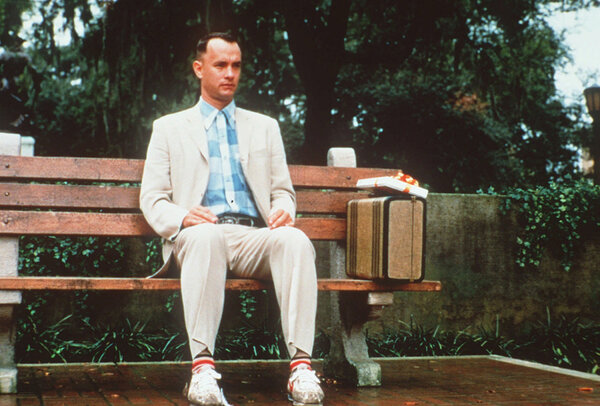 Winston Francis Groom Jr. was born on March 23, 1943, in Washington, the only child of Winston Sr. and Ruth (Knudsen) Groom. His father was a lawyer for the Pentagon who returned to Mobile, Ala., to practice law. His mother taught English in school and inspired Winston’s love of literature.

After attending the University of Alabama, where he edited humor and literary magazines, Mr. Groom joined the Army in 1965 as a second lieutenant in the infantry and was shipped out to Vietnam the following year. War was a formative experience, and one that would find its way into much of his writing. (Forrest was a Vietnam vet.)

“I’d never done anything worth a hoot in my life except that,” Mr. Groom said in a C-SPAN interview, referring to his military experience. “I mean, it’s something that was very impressed on me. To write about men in war.”

On his discharge he spent nearly a decade as a reporter for the now-closed Washington Star before quitting to pursue a literary career in New York. He palled around with writers like Irwin Shaw, Joseph Heller and Willie Morris, hewing to the tradition of the Southern raconteur and man of letters. At 6 foot 6, brimming with charisma and wild stories, Mr. Groom fit the part imposingly. Like his father, he would return to Alabama to live.

Mr. Groom was married three times. In addition to his stepson, he is survived by his wife, Susan Groom; a daughter, Carolina Groom; and two other stepchildren, Guy Helmsing and Margaret Browning.

“‘Forrest Gump’ is not the only reason to celebrate him as a great writer,” P.J. O’Rourke, the political satirist and journalist who knew Mr. Groom for decades, wrote in an email.

“And this is not even to mention Winston’s extraordinary historical and nonfiction works,” he added.

Those books include the Pulitzer Prize finalist (for general nonfiction), “Conversations With the Enemy” (1983), an account of a Vietnam-era prisoner of war written with Duncan Spencer; “Shrouds of Glory” (1995), about the Civil War; and “Patriotic Fire” (2006), about the Battle of New Orleans.

At his death, Mr. Groom was awaiting the publication of “The Patriots,” a combined biography of Alexander Hamilton, Thomas Jefferson and John Adams; it is to be published in November by National Geographic.

His first wife, Baba Groom, whom he met when they were students at the University of Alabama, said he had been a born writer. They remained close after their divorce in 1984.