Amy Robach has had a tough week reporting from the frontline following the recent mass shooting in Texas, and she made sure to take some time for herself.

MORE: Amy Robach shares video of terrifying interruption she faced while on a hike

The journalist partook in one of her favorite pastimes, hiking, but it was clear that the tragedy, which claimed the lives of 22 people – including the shooter – had impacted her as she went for her run with a sullen look on her face. The mom-of-two also shared a photo showing that she had walked over two miles alongside a snap of gorgeous flowers that she had picked from her own garden.

“Working through my heavy heart… A solo run and some flowers from my garden… trying to appreciate the small beautiful moments,” she captioned the moving photos.

WOW: Amy Robach appears like you’ve never seen her before as she reveals unbelievable transformation

Her followers were quick to offer their support to the popular host, as one commented: “Tough week Amy!! Especially there on the front lines-Great reporting this week. Thanks #heavyhearts,” while co-star Dr. Jennifer Ashton shared a praying emoji.

A second posted: “Your reporting this week was great, I’m sure not easy at all,” and a third added: “Thank you for your dedication. Very sad story.“

A fourth shared: “It’s the recognition and appreciation of the moments of joy that sustain us during hours of darkness.” 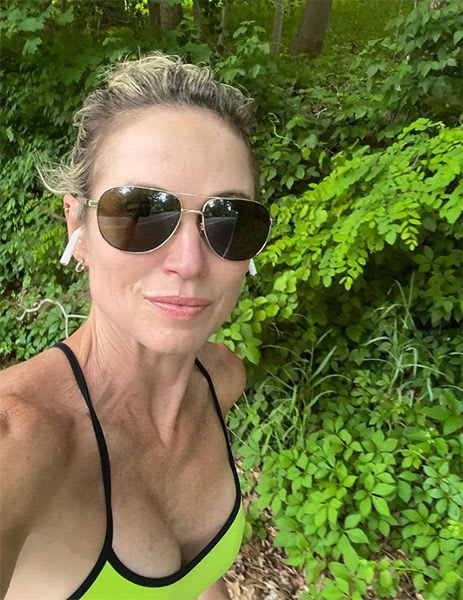 Amy reflected on a difficult week

And in a lengthy comment, a fifth penned: “Love you Amy & thank you for reporting & keeping us informed- I do feel for you as I can only imagine how difficult it was to report from such atrocity- words can not express my feelings for all.”

The week has been incredibly emotional for Amy, who has two teenage daughters, and she was visibly moved when reporting from the scene with tears in her eyes as she explained to co-host George Stephanopoulos what had happened.

Several stars have released personal statements in the wake of the shooting, including Good Morning America star Ginger Zee, who spoke about how it affected her as a parent.

Amy had to deliver some tough reports

“How do we send our children to school today? I fell asleep sobbing for these families. I woke up crying and full of fear. What action can I take TODAY to keep my children safe?”

She shared more of her thoughts on her Stories, including the speech made by Senator Chris Murphy on gun violence, writing: “What are we doing?”

Ginger continued: “Why is it so much worse here in America? And how am I supposed to send my children to school tomorrow? How is anyone?”

Ginger was also emotional as she delivered her usual weather forecast on GMA, saying that there was something “we can do to prepare and keep ourselves safe” while choking up.