Angelia Jolie pushed her own grocery cart in organic food store Erewhon, where she stocked up on several bags of items.

Angelina Jolie‘s daughter Zahara Jolie-Pitt, 16, looked so stylish on a recent grocery trip run. The teenager rocked a long red, cotton dress and sneakers while shopping at pricey organic food store Erewhon in Los Angeles on Saturday, Sept. 18. Zahara accessorized with beaded bracelets and a ring, as well as a protective face mask due to COVID-19, in a photo snapped by the stores’ refrigerators. 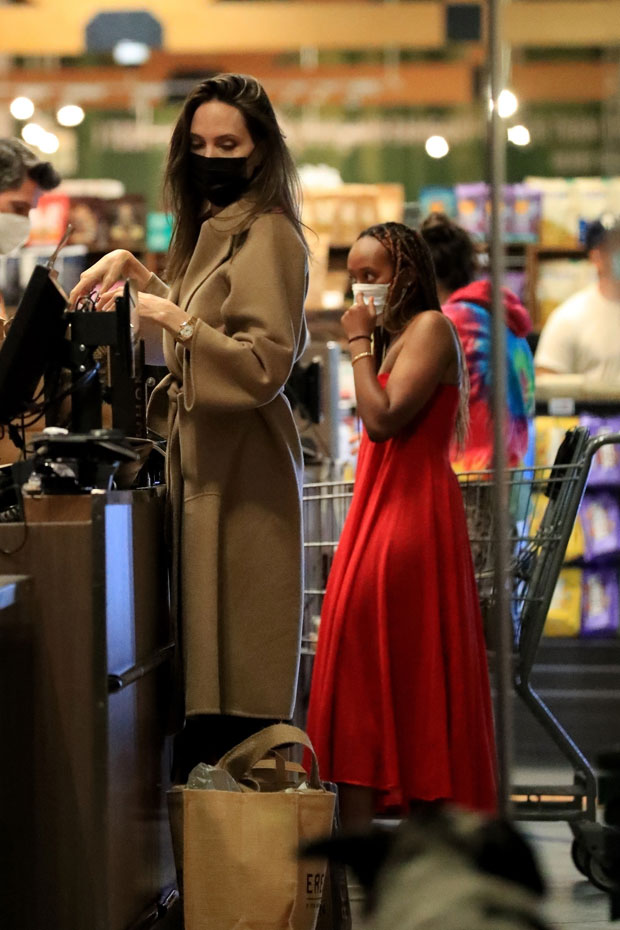 She was joined by her equally as fashionable mom Angelina, who kept to her usual neutral tones. The 46-year-old channeled Max Mara in her camel colored wool wrap coat, as well as a low, nude colored leather pump. Angelia kept her dark hair down and in a loose wave, keeping her face partially covered with a black face mask. The Lara Croft: Tomb Raider actress was pushing her own grocery cart through the West Hollywood store, which looked filled with an array of snacks and goodies. Leaving the store, at least six filled paper bags could be spotted in the cart. 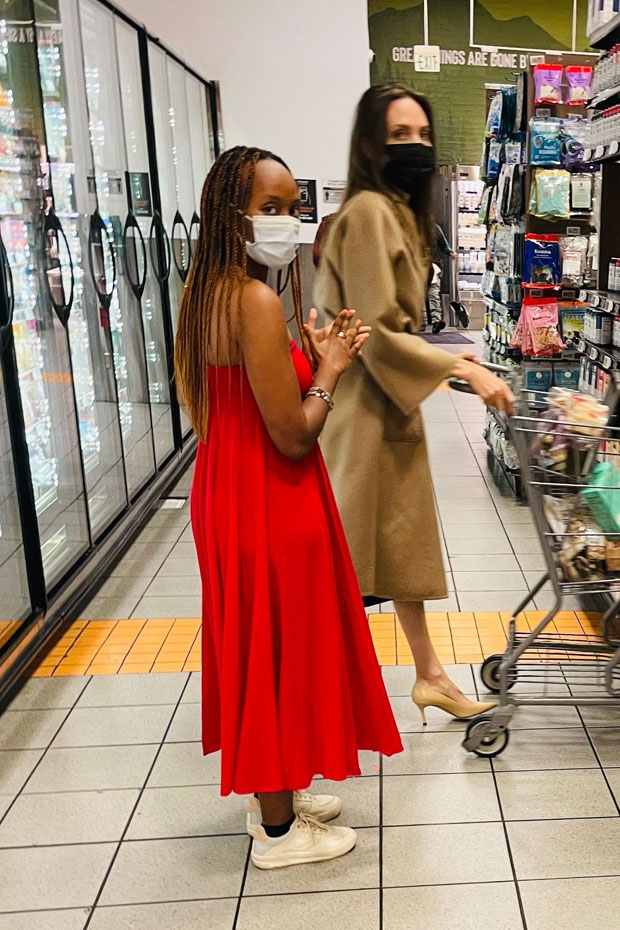 The actress, who is the daughter of Jon Voight, 82, recently visited the White House to speak about the importance of the Violence Against Women Act. In a short video from the appearance, Angelina let out a nervous laugh as she snapped a photo in front of a White House podium, looking poised and elegant in a sleeveless black turtleneck and cream midi-length skirt.

During the visit, she also met gymnasts McKayla Maroney, Aly Raisman, and Maggie Nichols, who spoke about the FBI’s handling of the Larry Nassar investigation in a Senate hearing. “I was honored to meet with some of the brave US gymnasts who appeared before the Senate Judiciary Committee yesterday,” she captioned her social media post. “I’m in awe of their courage and commitment to preventing future failures to investigate abuse,” she also said.

The appearance came amid Angelina’s on-going child custody case with ex Brad Pitt, 57. In late August, Angelina was granted full custody of the couple’s minor children, Pax, 17, Zahara, 16, Shiloh, 15, and 13-year-old twins Vivienne and Knox (eldest son Maddox, now 20, is legally an adult). In a rare interview, Angelina confessed she “feared” for the safety of her kids during her relationship with Brad.

“I’m not the kind of person who makes decisions like the decisions I had to make lightly. It took a lot for me to be in a position where I felt I had to separate from the father of my children,” she said during the same interview with The Guardian.