It’s no secret that Kate Middleton and Meghan Markle’s relationship has been strained over the years (Meghan opened up about this during her interview with Oprah), but apparently they never really got a chance to “bond” when Meghan joined the royal family.

Royal biographer Andrew Morton writes in his unauthorized biography, Meghan: A Hollywood Princess that “Kate and Meghan were neither sisters nor, unlike Fergie and Diana, friends before they joined the Royal Family. What is more, during the build-up to Meghan’s wedding, Kate was experiencing her third difficult pregnancy and was focused on her own welfare. She did not have much energy to bond with her new neighbor. When they sat together in the royal box to watch the Ladies’ Singles Final at Wimbledon in July 2018, the two women were still getting to know one another.” 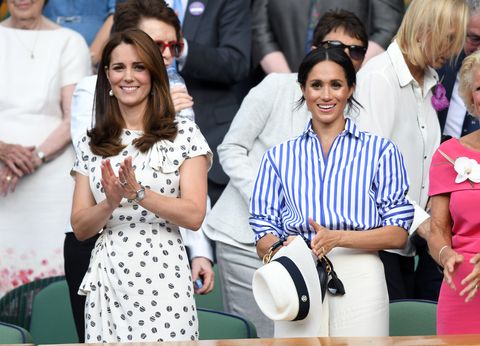 Turns out there was “little opportunity” for the duchesses to form a true friendship away from the spotlight, with Andrew saying “It was a practical matter as much as anything. Kate spent weekends and holidays at Anmer Hall, the Cambridges’ country home in Norfolk, while Meghan and Harry were approximately three hours’ drive away, living in a large, remote, rented property on the Great Tew estate in Oxfordshire. Harry’s dream of two united happy families seemed a long way off.”