Britney Spears’ co-conservator Jodi Montgomery asks judge to approve $221,090 worth of fees for unpaid work… one day after the star’s dad DENIED her request for extra security amid ‘death threats’

Britney Spears’ co-conservator Jodi Montgomery HAS reportedly asked a judge to approve fees of more than $221,090.

According to court documents obtained by TMZ on Friday, the six-figure sum is for work ‘she did for Britney’s conservatorship from Nov. 1, 2019 to the end of February 2021.’

In addition to the payment, Montgomery, 53, wants the ‘court to approve an additional $65,465 to cover the cost for her personal lawyer.’

Expensive: Britney Spears’ co-conservator Jodi Montgomery reportedly asked a judge to approve fees of more than $221,090 on Friday, according to TMZ

On Thursday, Spears’ father Jamie fought his co-conservator’s request for security, a day after she said she’d help Britney get her own lawyer who can end the complex legal arrangement that he controls.

Jamie is the only one involved in the proceedings who hasn’t asked the judge to let Britney appoint her own attorney, nor has he commented on Britney’s emotional testimony on June 23 that he is controlling her against her will.

Jodi, on Wednesday, asked the judge to let Britney appoint her own attorney as she’d requested, after the resignation of Sam Ingham, the court appointed lawyer who had represented her from 2008.

Jodi and Britney remain on good terms, according to texts she provided to the court which show Britney asking her to help her and remain in her role as Conservator of the Person so that together, they can take on Jamie and untangle the complex legal arrangement. 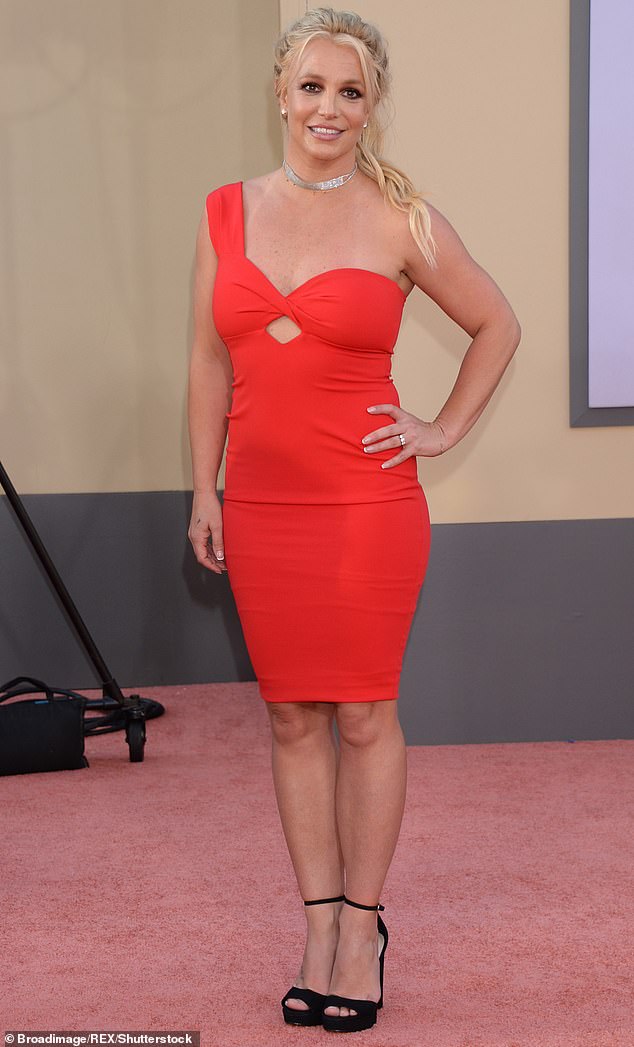 Fighting to regain control: Britney (pictured in 2019) has spent the past 13 years under a conservatorship, which she called ‘abusive’ last month in court

Jodi said she needs it because since the case has attracted so much attention in recent weeks and months, she is receiving regular, violent threats.

Jamie, in court papers on Thursday, contested it.

He said that they all get death threats and have for years so Jodi should make her own arrangements to protect herself, and not request that Britney’s estate pay for it.

‘Mr Spears is very concerned about the situation that has been developing for many months and the dangerous rhetoric that has been circulating for quite some time regarding the Conservatorship.

‘Mr. Spears, himself, has been the subject of innumerable and ongoing threats as well – not just recently, but for years.

So Mr. Spears understands well the challenges inherent in the position he holds and the work he performs on behalf of his daughter,’ his attorney said. 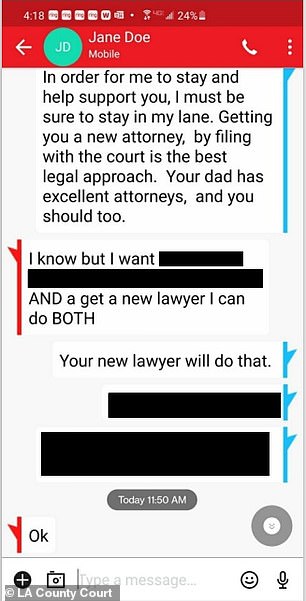 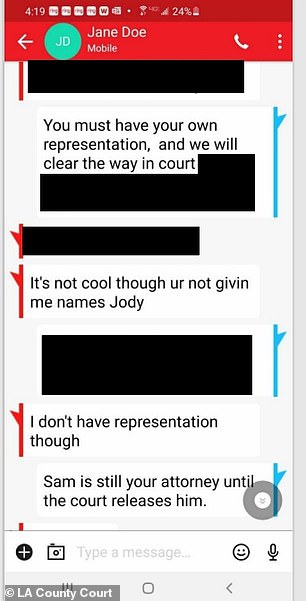 These texts between Britney Spears and Jodi Montgomery reveal the singer’s request to her to help her find a new attorney who will then file papers to terminate the conservatorship. They were submitted to the court on Wednesday by Jodi as proof that she is trying to help the singer

‘The relief she requests…is too vague and open-ended and improperly and inexplicably seeks to shift the burden of ensuring her safety to Mr. Spears.’

In her request on Wednesday, Jodi said Britney should not be held to the same standard now as she was in 2008, when the Conservatorship was put in place after she suffered a mental health breakdown.

She is not stepping down – doing so would not end the conservatorship, but open the court up to appointing someone else – and instead says she’ll help Britney by letting her get her own lawyer, who can then file the paperwork needed to end the legal saga.

In documents filed on Wednesday afternoon, her attorney said: ‘After 13 years of court-appointed counsel, Ms Spears wants to select her own counsel.

‘In addition to her very public comments, Ms Spears has told Ms. Montgomery privately that she wants to select her own counsel and has asked Ms. Montgomery, as her Conservator of the person, to help her in the selection process. 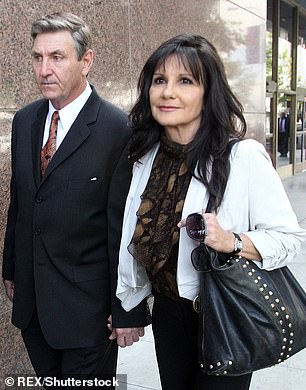 Britney’s mother Lynne has also asked the judge to let her appoint her own attorney. She is shown in 2012 with Jamie at a lawsuit hearing against Sam Lufti

‘While Ms. Montgomery is always driven to help Ms. Spears in whatever way she can, there is no question that Ms Montgomery’s input on Ms. Spears counsel is beyond her powers and is inappropriate in light of Ms. Spears recent criticisms of her conservatorship.

‘Nonetheless, she has heard her words and wants to honor her wishes. she believes it is urgent and important for her to bring this issue to the court.’

If Britney appoints her own attorney and they file a request to terminate the Conservatorship, it will be down to the judge – Brenda Penny – to either grant it or not.

Britney told the court on June 23 that she wasn’t aware she could file such a request so she never asked her lawyer to do it.

Ingham, her attorney, did not publicly state why he resigned nor has he confirmed if he ever told Britney she had the right to end the legal arrangement.

Britney’s mother Lynne has also asked the judge to grant Britney permission to appoint her own lawyer.

Her attorney wrote: ‘On June 23, 2021 in very courageous showing, Conservatee [Britney] appeared by phone and spoke for almost twenty—five minutes, baring her heart to the Court in an impassioned plea to be heard on several requests. 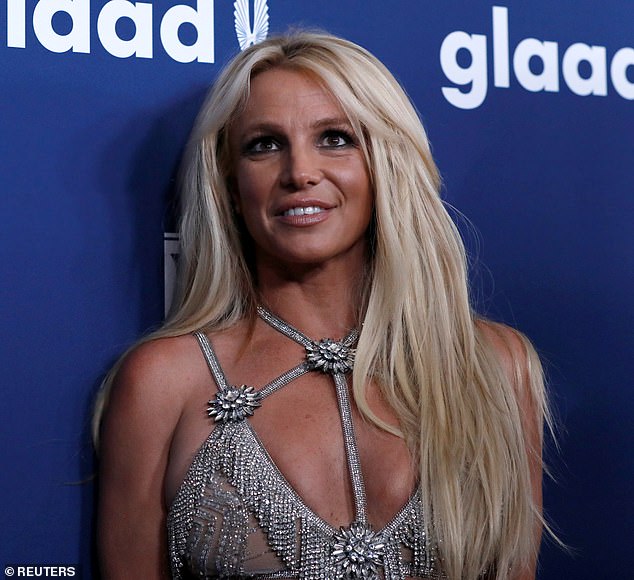 ‘Petitioner Lynne Spears, interested party and mother of the Conservatee, hereby petitions this Court to listen to the wishes of her daughter, and as first step, respectfully requests an Order granting permission to the Conservatee to hire her own private legal counsel.’

Lynne’s attorney goes on to say Britney has ‘quite literally earned hundreds of millions of dollars’ as a celebrity and can care for herself.

‘It is beyond dispute that this is a unique conservatorship. In the original petition for appointment, her given address was the UCLA Medical Center.

‘Now and for the past many years, she is able to care for her person and in fact has, inside the parameters of this conservatorship, earned literally hundreds of millions of dollars as an international celerity.

‘She should no longer be held to the same standard,’ Lynne’s attorney wrote.

The next hearing is on July 14.

TIMELINE OF BRITNEY’S COMPLEX CONSERVATORSHIP AND HOW IT BEGAN

Britney with her father, brother and mother in 2006. Her parents separated

Britney breaks up with Justin Timberlake around the same time

2007: Britney, struggling through a custody battle and split with Kevin, shaves her head and attacks a paparazzo’s car

2008: Jamie Spears files for conservatorship of Britney, claiming she is not legally well enough to make her own decisions

Britney in 2008 for a custody hearing as part of her split with Kevin Federline. Jamie Spears in court in 2008 getting the conservatorship

The conservatorship – which had been temporary – is extended  every year.

In court papers, Jamie’s attorneys describe how she is making more money

January 2019: THE ARRANGEMENT STARTS TO CRUMBLE

Britney in 2019, in the grips of the conservatorship, in Las Vegas at her residency

Jamie files paperwork asking for the conservatorship to be extended beyond California, to apply in Hawaii, Louisiana and Florida as well

Early 2020: Britney, Jamie and Jamie-Lynne are in Louisiana together for two weeks.

The #FreeBritney movement is picking up.

His attorneys claim everyone is happy together and enjoying spending time together in quarantine.

November 2020: Britney’s attorneys claim in papers that she’s afraid of her father and they ask for Bessemer Trust to be put in charge.

Her fans start speculating over her cryptic Instagram posts and videos that she wants a way out.

December 2020: The conservatorship is extended until September 2021

The conservatorship that Britney was put under is ordinarily used in situations where older, perhaps senile people, can no longer look after their own affairs.

Fans are concerned for her well-being and want her to be released from the control of her father, Jamie, who can still legally make decisions on her behalf

It gives control over to an appointed conservator for the best interest of the recipient but in most cases, the recipient is not healthy enough to make their own money, unlike Britney who makes millions. Under the rules of the probate conservatorship, Jamie now has equal control over her estate to a third party and an attorney, Andrew Wallet. Wallet derives  a salary of $426,000 a year from Britney’s estate.

He, Jamie and the third party who was brought on recently can make deals on her behalf and restrict her visitors.

In emotional testimony, Britney told the court that she had suffered psychologically for years as a result of the conservatorship which she said was so restrictive, she wasn’t allowed to remove her IUD birth control

She doesn’t say why but she does invite her attorney to file paperwork to end it, which he doesn’t.

A day after the judge’s ruling, Bessemer Trust, which had been brought on, resigned, saying they were never aware that Britney wanted to end the conservatorship.

In a court filing, the company’s attorneys said: ‘We heard her and respect her wishes.’

Larry Rudolph wrote a letter to Jamie and the conservatorship to say he was no longer needed since Britney wanted to retire.

He said he hadn’t spoken to her for two years but had been told by others that she wanted to step down.

Sam Ingham, the attorney appointed to represent Britney in 2008, steps down after failing to file paperwork to terminate the conservatorship, despite her pleas.