Patrick Mahomes was left heartbroken after the Chiefs suffered a brutal loss to Tampa Bay on Feb. 7. However, the quarterback’s fiancee Brittany Matthews lifted his spirits with a heartfelt message.

Brittany Matthews took to Twitter to comfort fiance Patrick Mahomes after he suffered a disastrous Super Bowl 55 loss on Feb. 7. The Kansas City Chiefs were clobbered by the Tampa Bay Buccaneers, who looked like true champions in a game in which G.O.A.T QB Tom Brady showed why he was worthy of a record seventh Super Bowl ring. After Patrick’s team’s loss, pregnant Brittany took to Twitter in hopes of lifting his spirits.

“Now how we wanted it to end, but 15 played his heart out and I’m always and forever proud of him in everything he does,” she started her tweet. Then, she said, “let’s have a baby”, so it looks like they’re already looking towards their future.

By the start of the fourth quarter, Patrick hadn’t thrown for a single touchdown, and their six points on the scoreboard were thanks to field goals. Pat was sacked, had plenty of missed throws and just a completely off night for the 25-year-old formerly reigning Super Bowl champ and MVP. Even CBS announcers Tony Romo and Jim Nantz were wondering when the K.C. Chiefs who had looked do dominant all season were going to show up.

Patrick’s performance was partially hampered by the pain he was in due to a bad case of turf toe. He was first diagnosed with it following the Chiefs’ 22-17 win over the Cleveland Browns in the Divisional Round. Ian Rappaport, National Insider for NFL Network, reported that he’s likely to undergo surgery on his foot now that the big game is done. 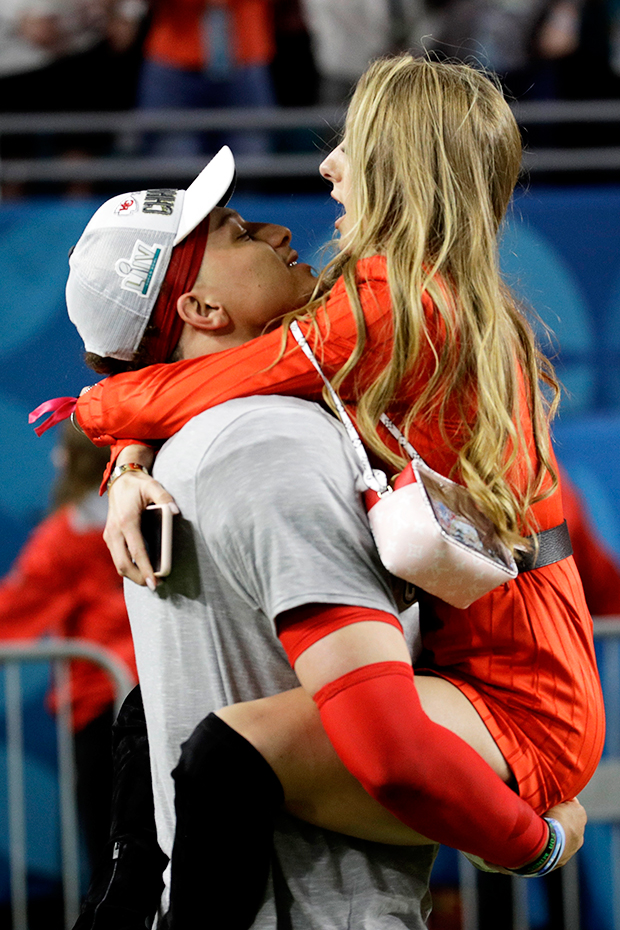 At least Patrick has something joyous to look forward to in the off season, as he and Brittany are expecting a baby girl. She showed off her very prominent baby bump at the game in a tight white dress with a long blue jacket over it. She should be due any day now, as the health trainer, 25, and her high school sweetheart Patrick, announced their pregnancy with an adorable Instagram post in September 2020. In addition to having a baby, they are also planning their wedding!

While the defeat had to have been devastating for Patrick, he’s going to have plenty of years ahead of him to lead the Chiefs to another Super Bowl win. He signed a 10 year, $503 million contract in the off-season with the team, meaning he’ll be with K.C. until he’s at least 35-years-old. And a half-billion dollar contract is enough to erase any pain from a Super Bowl loss.