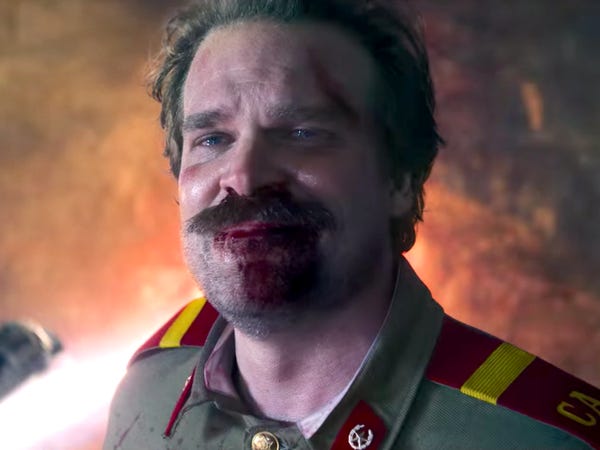 The third season of "Stranger Things" ended with Jim Hopper's dramatic self-sacrifice, allowing Joyce to blow up a machine the Russian government was using to reopen the Gate to the Upside Down. In the show's narrative, everyone believed Hopper (played by David Harbour) was dead.

There were more than a dozen hints pointing to his survival, however. When the "Stranger Things" season four teaser was released earlier this year, it was revealed that Hopper was alive and imprisoned in Russia.

In a recent interview with Netflix, "Stranger Things" cocreators asked Harbour how much he hated having to "hide Hopper's fate from the public."

"I feel like everybody kind of knew that he wasn't dead, because you didn't see the body, and in sci-fi, if you don't see the body …" Harbour said, trailing off.

Not only was there no body left behind, but the entire way the scene was staged left open the clear possibility that Hopper had escaped before the Russian's machine exploded.

You can read our thorough breakdown of all the hints that Hopper was alive here.

The upcoming fourth season of "Stranger Things" has been delayed following the COVID-19 pandemic. Filming had already begun before production was shut down, which is how fans were able to see some new footage in the trailer released in February.

The trailer opens in Kamchatka, Russia, and shows soldiers working outside as snow falls around them. One of the workers on the railway is revealed to be Hopper, whose hair has been shaved off. Though little else is currently known about the plot so far, fan theories are already cropping up.

Some people believe "Stranger Things 4" will bring Eleven, Joyce, and the rest of the crew overseas to Europe, possibly on a rescue mission to save Hopper.

What would be next for Hopper once he's broken out of a Russian prison? The show has yet to explain several seemingly important aspects of Hopper's past, including a weird link between his daughter's death and the Hawkins lab.