Rylan Clark has proudly shown off his new teeth, after replacing his famous veneers.

The star, who was still sporting a swollen face after returning to social media after the procedure, has been documenting his recovery for fans on social media and returned on Thursday evening to tease his grin.

Wearing a cap, Rylan shared a short clip to his Instagram where he showed just a hint of his teeth before placing a hand over his mouth to not give the whole thing away.

In another slide he added a garish filter over the top making it hard to see what changes he may have had done to his iconic grin, as he mused he was ‘still swollen’.

The Strictly: It Takes Two presenter then flashed a smile for the clip which appeared to show a brand new set of extra-pearly whites.

He’s yet to show off the final product of his dentistry sans filter, but it certainly seems like he’s enjoying teasing it for us. 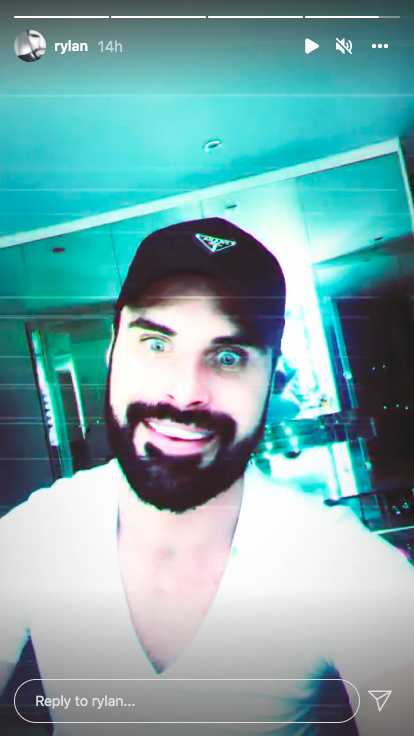 The 33-year-old star teased his dramatic makeover on Wednesday and suggested the process was not for the faint of heart in a clip, where he sported a very un-Rylan tousled hairdo and rubbed his cheeks.

Swathed in a dressing gown, Rylan captioned the clip: ‘Swollen.’

It comes as the Strictly Come Dancing: It Takes Two presenter decided he was done with his current set of teeth, which he’s called his own since 2013.

In a Twitter post made on Monday, the star – who recently split with his husband Dan Neal – wrote: ‘After 8 years. It hurts, so much, but sometimes you just have to let go. I’ve taken the decision to say goodbye… to my teeth … new smile imminent.’

He confirmed the treatment furthermore by tagging cosmetic dentist Dr Richard Marques in a post.

His ultrabright beam was said to have set him back an eye-watering £25,000, but the star has always shown a good sense of humour about his gnashers, even thanking Love Island’s Connor Durman for ‘taking the heat off me a bit’ when the toothsome reality TV contestant was introduced to viewers in January 2020.

Still, the famous teeth became something he regretted.

Radio 2 presenter Rylan told Bang Showbiz in 2016: ‘My biggest mistake was my teeth but, to be fair, they’ve earned me a lot of money.’