Dr. Dre‘s estranged wife had the gall to dip into a well-funded cookie jar not just once, but TWICE … at least according to Dre’s biz partner, who’s now accusing her of grand theft.

Attorneys for Larry Chatman — who co-founded Record One studio with Dre in 2015 — just fired off another letter to Nicole Young … accusing her withdrawing an extra $30,000-plus from the business account, despite no longer being legally authorized.

We already told you about the $353k Larry claims Nicole embezzled from the account in late August. The company accused Nicole of criminal conduct in draining the account and fired off a letter to that effect. After receiving the letter, Chatman says Nicole siphoned another $31,457, two days AFTER she was given the boot and removed in any official capacity. 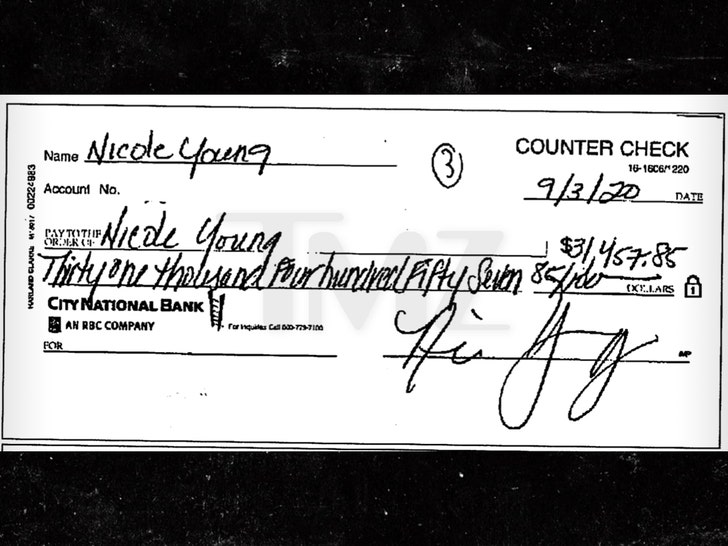 In Larry and his attorneys’ eyes … that amounts to grand theft … on top of the alleged $353k embezzlement from earlier.

Nicole’s attorney called their first accusation a “low-grade PR stunt” meant to embarrass his client and take the spotlight away from a recent lawsuit she filed against Dre himself … in which she accused him of hiding assets she feels entitled to in the divorce.

Nicole’s lawyer, Bryan Freedman, tells TMZ, “This is a clear attempt to smear Nicole’s name.  As people are well aware, banks do not give out money to people who are not authorized to receive it.”

This has become an epically-nasty divorce. Nicole claims Dre tore up the prenup she signed right before getting married. He calls BS on that. She also wants nearly $2 mil a month in temporary spousal support while the divorce winds its way through the legal system.