Bristol Palin is at the center of a controversy after being accused of ‘Photoshopping’ an image of herself promoting a brand of detox and “weight loss” teas.

The 28-year-old former Teen Mom star and Dancing With the Stars contestant posted an Instagram picture showing her looking fit and toned alongside a caption singing the virtues of the “butterfly tea” blend of Teami teas.

In the photo, the 28-year-old wears a dark sports bra and yoga pants that show off her trim midriff and toned abs.

You all know that I love being a #teamipartner ??‍♀️ but omgggg, I’ve been drinking this @teamiblends butterfly tea recently, and I am officially obsessed ?? all the ingredients are so good for you and it is delishhhh!! The butterfly pea flower is amazing for so many things – like improving digestion – and has so many antioxidants that it can help prevent premature aging (I’ll report back in a few ??) I love this blend with a little honey, and it gives me such a great pick me up in the afternoon, definitely try it out, and use my code ✨BRIS✨ for 25% off #thankyouteami

“You all know that I love being a #teamipartner, but omgggg, I’ve been drinking this @teamiblends butterfly tea recently, and I am officially obsessed,” the mother of three wrote. “The ingredients are so good for you and it is delishhhh!!”

Bristol, who has been a Teami “partner” for a while now and often puts up posts promoting them on Instagram, then goes on to list the benefits of the tea.

“The butterfly pea flower is amazing for so many things, like improving digestion , and has so many antioxidants that it can help prevent premature aging,” she says.

The picture garnered more than 22,000 likes within 24 hours after she posted it to Instagram, and hundreds of fans have been posting admiring comments.

“You are tiny! How in the world did you have 3 babies?! Lol. Love you and your hot mom bod… blessings from Cali,” a fan commented.

“She gets her great looks from her mom,” another fan wrote.

However, some fans were critical of Bristol plugging weight loss tea.

“I just don’t get why you promote this. You have kids yourself. It’s not regulated by the FDA,” one Instagram follower wrote. “It can cause liver issues, racing heart and diarrhea… Please no one take this stuff-just eat well and exercise. Short cuts don’t work.”

However, the biggest controversy centered around accusations that she “Photoshopped” the photo used in the promotional post. One user, @bossieaussie83, slammed Bristol for promoting the tea, calling it “100% ineffective”. She then added in response to another comment, “I’m an expert in photoshop having done it for over 20 years, and I can tell you this is also extremely misleading because she’s been nipped and tucked via PS. So there’s that moral issue too.”

However, Bristol’s mom, politician Sarah Palin, stepped in to defend her daughter. She hit back, “Haha silly bossyaussie83… have you ever seen Bristol in person? GORGEOUS! To falsely accuse… stating the pic is photoshopped… quite silly really. Curious why you follow Bristol and spend your time commenting on her?” 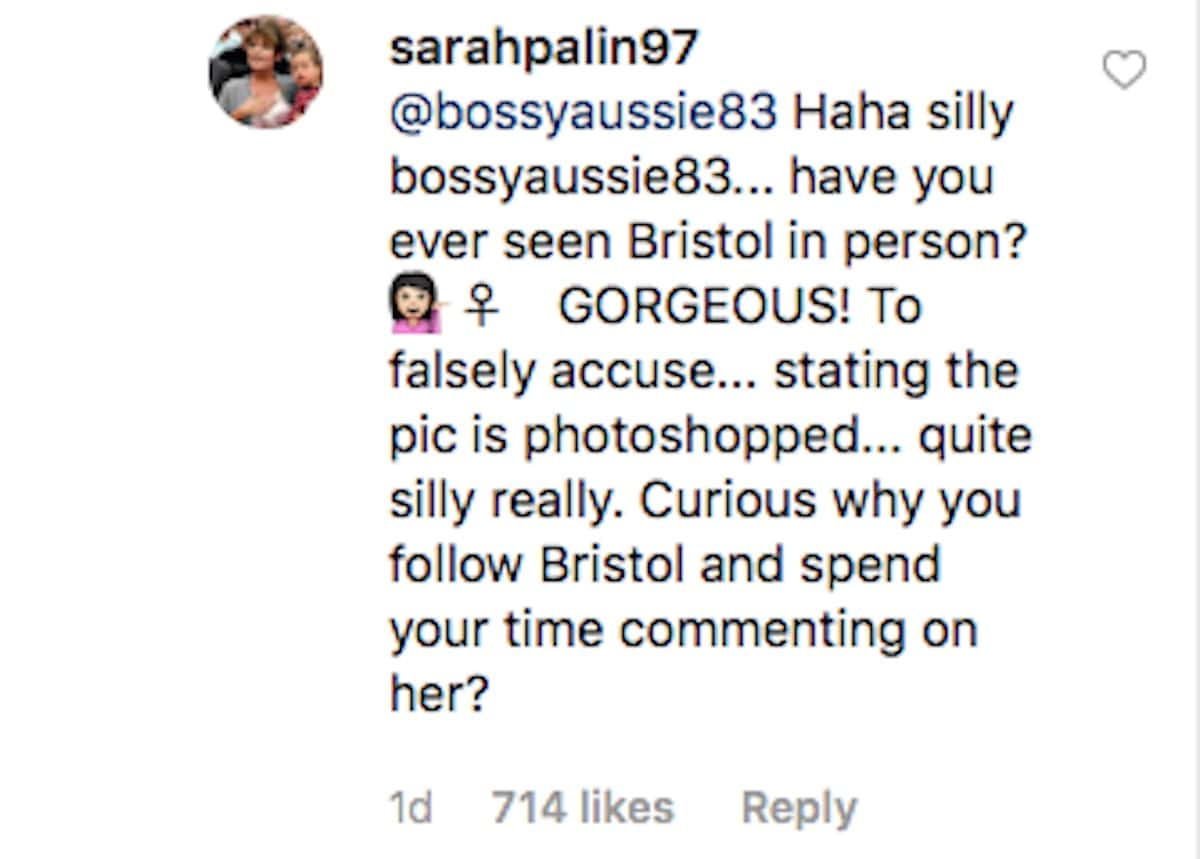 @bossieaussie83, wasn’t standing down however, tagging body-positivity activist Jameela Jamil and saying, “I just side with @jameelajamilofficialon this. She makes amazing points when it comes to this particular product.

“I see it a ethical issue selling laxatives that can have harmful effects on women to women who just want to lose weight. This isn’t a part of a healthy lifestyle. Bristol is totally gorgeous, but so are all women.” 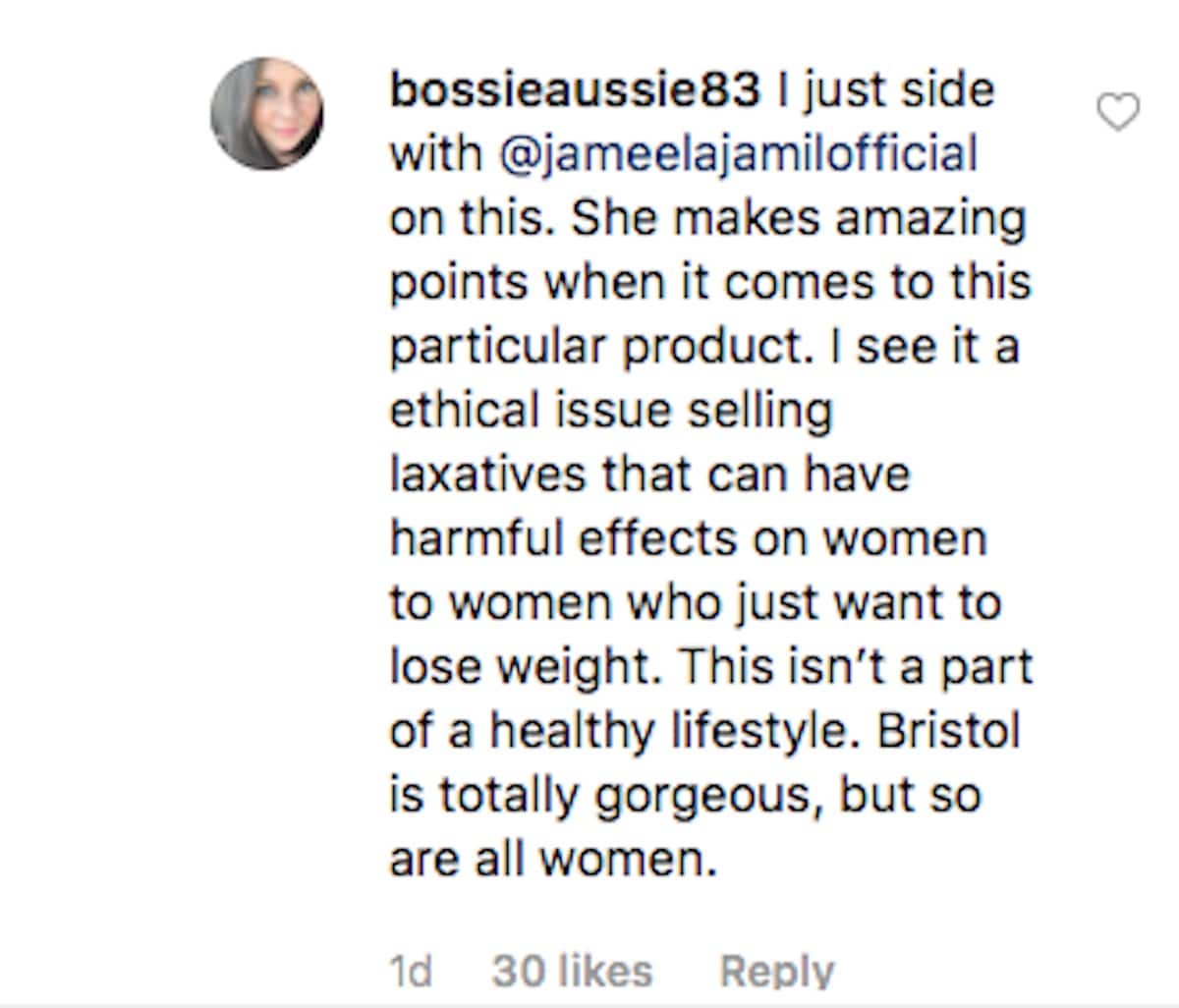 Bristol announced she was quitting Teen Mom OG back in March after appearing for only a season as a replacement for Farrah Abraham. She expressed displeasure about the way she was being treated by the showrunners and the way she was portrayed on the show.

“Teen mom OG wasn’t a fit for me, it took away my peace and honestly my peace has a price tag that no one but God can afford,” she wrote. “I don’t entertain bs, and walking away from this show allows God to rebuild me in the right direction.”

teen mom OG wasn’t a fit for me, it took away my peace.. and honestly – my peace has a price tag that no one but God can afford ? $ doesn’t impress me, I don’t entertain bs, and walking away from this show allows God to rebuild me (and my little fam) in the right direction. I have love for all the girls on the show, and wish them the best of luck in all their future endeavors!! ❤️? xoxo, B

If I cared what people thought of me, I wouldn’t be here today – let’s be real. I’ve stood strong and held it down for my kids since day one. No matter how bad @teenmom tries to portray my “life” ….. my babies, my family, my close friends – they know the TRUTH. I’m a pretty great mom, work my ass off, show up, and hustle everyday to give my kids a pretty great life. @mtv doesn’t want to talk about faith, show work ethic, or juggling three kids alone, they don’t want to show the humble process of starting over after a divorce, building a career, or any real life issues. All they want with my little segment each week is some fake fill-in Farrah Abraham/Jerry Springer BS, and it’s simply not true. Don’t get me wrong – I’ve said some mean things and learned a lot the last several months – but the life I’ve built for my kids is NOT sitting around talking about baby daddy drama. Every week is a continued disappointment with their inaccuracies and false narratives. I hate getting all emo on you guys but I’ve kept quiet for too long about it. Don’t believe everything you see on TV.

Bristol has more than 550,000 followers on Instagram and she often posts pics of herself, her children, and her family. She has three children, Tripp, 10, Sailor, 3, and Atlee 2.

Do you have something interesting to say about this? Start or join a discussion on our forum!