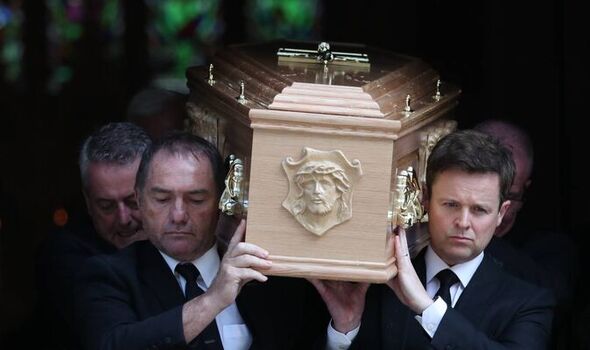 Fr Dermott Donnelly, who had recently celebrated 30 years of service in the Catholic church, died in hospital earlier this month aged 55 after a short illness.

And more than 2,000 watched the service on a livestream, which also went to St Michael’s Church – where the family had regularly attended mass and where Dec married Ali Astall in 2015, officiated by his brother.

Ant McPartlin, Dec’s friend and TV partner, arrived separately and the pair hugged outside after the service.

Fr Dermott was best known for his work with young people.

Paying tribute to his brother, Dec, 46, said Fr Dermott had been the middle child of seven, and told how they grew up in a three-bed house in Newcastle, with the four boys in one room and the three girls in the other.

He fought back tears as he said: “Unfortunately, today our world is a slightly worse place because Dermott is no longer with us.

“He still had so much more he wanted to do, so many more lives he needed to change. We can’t believe he’s gone, we still can’t understand why he’s gone – but we trust God took him because his talents were needed elsewhere.”