Zack Snyder’s newest film Army of the Dead brings viewers into a desolate, zombie-ridden version of Las Vegas. And while the zombies themselves are gloriously terrifying, the obliterated version of Sin City is something to see. And it begs the question: Just how did they do it?

In a behind-the-scenes clip by Netflix, Snyder delves into how he created a Sin City zombie wasteland using visual effects. And the sheer production of the film is mind-blowing.

Snyder calls Las Vegas a “weird, super-fun world” by default, making it the perfect location for his zombie thriller.

“Everything is an extreme of reality in every way,” he says of the locale. “And especially if you put zombies into that equation, you end up with an amazingly fun but also frighteningly real picture of ourselves.”

To bring that picture to life, Snyder worked in chorus with an “army” of talented producers—and a massive budget of $90 million. But even the big bucks couldn’t save the team from a buzzkill reality: the Vegas strip is just too dang busy for a zombie movie.

“We quickly realized to shoot this practically in Vegas was an impossibility,” producer Wesley Coller says. “It wasn’t going to give us what we needed. So we talked about the various paths to create that.”

In the end, the producers and visual effects team created detailed maps and mock-ups of the Vegas strip, zoning out which areas would be full-blown built sets and which would be digitally created.

“Anything that the actor’s touched or walked on was going to be real and practical, and we built it on a backlot in New Mexico,” producer Deborah Snyder said.

To create the undead city, the team brought in actual decimated vehicles, from garbage trucks to cars to buses, to make the lot believable as a once-bustling wasteland.

“To make fake rubble here would blow away because it’s so windy here, so we has 30 truckloads of real rubble dumped,” production designer Julie Berghoff adds.

While the production team was shooting in this “fake Vegas,” a photography team was digitally capturing every detail of “real Vegas,” scanning the actual 4.8-mile long strip with still photography and a LiDAR scanner get every minute detail perfect. The LiDAR scanner, which captures objects in 3D detail and relative space, was even taken into a helicopter to scan the topography from above. 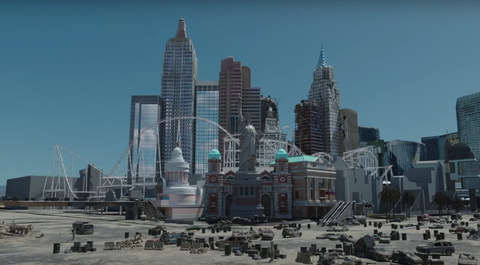 “With the motion picture data combined with the still photography that we took combined with the terrestrial arial LiDAR, we got this beautiful picture as a 3D point cloud of the entire Las Vegas strip,” visual effects supervisor Marcus Taormina says.

Then the team worked to digitally destroy, picking and choosing which landmarks would make it through a zombie reign of terror. There was a method to the madness, making the dilapidated strip believable yet curated. 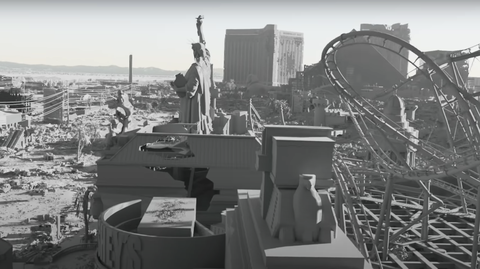 “The idea was that the sort of glory, the icons, make it through so that as you look at it, you know where you are. And it’s a fine line between how much destruction and having enough remaining that it was, of course, still iconographic,” Zack Snyder says, adding, “I think we really pushed it as far as we could.”

And that, folks, is how you make a zombie movie.