Meghan Markle was added to the royal family’s website after she married Prince Harry in 2018. Each member of the royal family — by blood or by marriage — has a sort of “about me” section, which provides a biography, and some other information for the public. The Duchess of Sussex’s page on the website is actually one of the shortest bios, and it includes a paragraph about Megxit. “As announced in January 2020, The Duke and Duchess have stepped back as senior members of The Royal Family. They are balancing their time between the United Kingdom and North America, continuing to [honor] their duty to The Queen, the Commonwealth, and their patronages. Frogmore Cottage in the UK remains their family home,” Meghan’s bio reads, in part.

Of course, that information is a bit outdated, as Meghan and Harry have not been “balancing their time” between the UK and the U.S. In fact, Meghan hasn’t returned to the UK since leaving in early 2020. Moreover, while the Duke and Duchess of Sussex may still claim Frogmore Cottage as their family home in Windsor, Harry’s cousin, Princess Eugenie, currently lives there with her family, according to Observer. And while Meghan and Harry might use the home for any future visits, it seems the last of their possessions were removed from Frogmore Cottage back in July, according to The Sun (via the Mirror).

Additionally, there was a change made to Meghan’s bio this summer. Keep reading to find out what’s different. 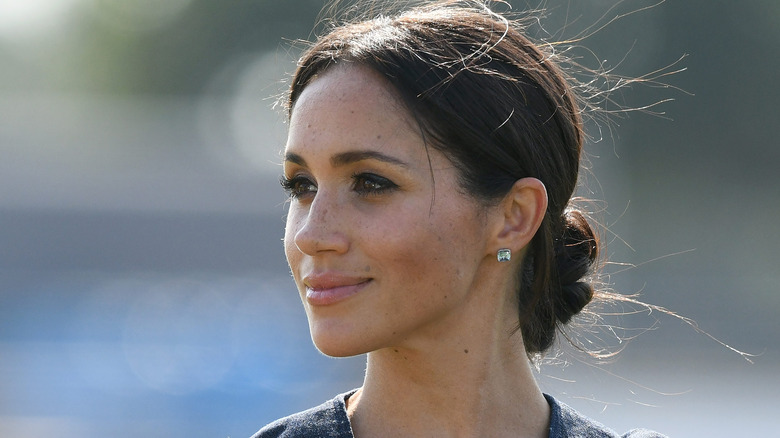 According to the Daily Mail, Meghan Markle’s bio on the royal family’s website was updated to include that she is now a mother of two children. The edit also includes Meghan and Prince Harry’s daughter’s name, Lilibet Mountbatten-Windsor. “The Duchess of Sussex, born Rachel Meghan Markle, married Prince Harry at St George’s Chapel, Windsor in May 2018. The Duke and Duchess have two children, Archie Mountbatten-Windsor and Lilibet Mountbatten-Windsor,” the paragraph reads in full. Lilibet Diana was born on June 4, 2021, but her name was not officially added to the royal family’s website right away. The reason why isn’t known.

Interestingly, Lilibet has not been added to the royal family’s line of succession page. “You have got to ask what has taken them so long. All they have got to do is hit the paragraph button and put in a different number. They must have done it before. They did it for Archie. Clearly they did it for Louis when he was born. And they have done it for some of the other children like August that have been born as well. So where’s Lilibet? I can forgive them a week or two but a month?” ITV Royal Editor Chris Ship previously said, according to the Daily Mail. As of August 18, Lilibet’s name had still not been added.