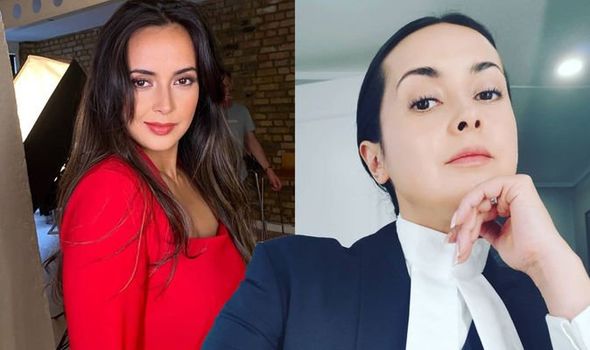 Rebecca Grant, 38, has had a busy year filming for the upcoming BBC drama, Showtrial, and also gearing up to showcase her art collection. The Holby City actress admitted it is “difficult” sometimes to balance her many work commitments while also being a mother, as sometimes she can feel professionally “unstable”.

Speaking to Express.co.uk on her impressively diverse CV, Rebecca said: “Maybe I should get a proper job! It would be great to have more security, especially with children. I’m finding my stability and footing because I believe I can find stability in the creative arts, as difficult as it is sometimes.

“I want to prove myself right and others wrong,” she admitted.

The TV star shared how she admired actors such as Anthony Hopkins, who don’t allow themselves to be pigeonholed.

Rebecca continued: “Everything I do is in the arts so I try as much as possible to be good at what I do… look at Anthony Hopkins, he paints and he is a composer and plays the piano!”

She will next appear onscreen in Showtrial, BBC’s latest drama produced by COBRA mastermind Ben Richards.

The new five-part series will delve into the ways that prejudice, politics and the media can impede the processes of law and order.

Showtrial will focus on the life of Talitha Campbell (played by Celine Buckens), the estranged daughter of a wealthy property developer who winds up being charged for conspiring to murder fellow university student, Hannah Ellis.

The police are keen to throw the book at their arrogant and rude prime suspect, but they’ll face resistance from cool-headed solicitor Cleo Roberts (Tracy Ifeachor), who has a professional reputation to rebuild.

From the time of arrest to the moment of truth, viewers will follow Cleo and her team of defence lawyers as they attempt to uncover the truth about Talitha – is she Hannah’s cold-blooded assassin, or simply a sabotaged scapegoat?

Speaking about his newest project, writer Ben explained to BBC: “Trials – and the cases that produce them – have always fascinated me, both because of their social and moral implications, but also because of the drama of uncertainty that they produce.

“What can we ever say we know for certain? Can we really get to a stage of knowing it beyond reasonable doubt? How do our prejudices affect the outcome of justice? To what extent should the right to a fair trial take precedence over our need for a culprit and understandable instincts for revenge?

“Where Showtrial is, I think, different from many legal shows is in trying to show the angle of view of all sides of the case without necessarily privileging or demonising any of them.”

Rebecca revealed she had used her grandfather, who was a lawyer, as inspiration for her to get into character as smart-witted Niche Barie.

She said: “I’m really excited to see everyone’s work, it’s a wonderful female-heavy TV series, and I appear from episode three when we take you into the courts.

“It was thrilling to film that and I really channelled my grandfather who used to be a lawyer in the Philippines. He won a lot of cases.

“I grilled my mum on what it was like living with him. So I really explored my roots in that sense.”

She added: “It was an interesting part to play, really challenging to strike the balance between being a friend of my client but also being a professional adviser.”

Rebecca is also in the midst of developing a play with an award-winning playwright around the iconic artist Frida Kahlo with co-producer Steve Scrivens.

Produced by their company Red Boot Productions, they aim to bring this to the West End in 2021.

Showtrial airs tonight on BBC One at 9pm.