Jennifer Lawrence was ‘so excited’ when she found out about Jennifer Lopez and Ben Affleck’s Montana holiday that she interrupted her interview with a podcast to break the news.

Where were you when you found out that Jennifer Lopez, 51, had reunited with Ben Affleck, 48, at the Big Sky resort in Montana? Jennifer Lawrence was recording an episode of The Bitch Bible podcast when she must have looked down at her phone to see a mobile alert. Suddenly, JLaw turned into JNN to report the latest regarding J.Lo. “Breaking! Breaking! Breaking f-cking news,” Jennifer, 30, said, interrupting her chat with friend Heather McMahan. “Jennifer Lopez and Ben Affleck are back together. They’re in Montana. They are on vacation with each other right now.”

“I’m so excited!” JLaw said after a bit of crosstalk. “I’m so happy for them.” From there, JLaw and Heather talked about the pink diamond engagement ring that Ben gave J.Lo back in 2002 (the one that was 6.1 carats and worth an estimated $2.5 million.) So, judging by the reaction, it’s safe to count JLaw as one of the many who all aboard the “Bennifer 2021” hype train.

Two weeks after the world learned Ben and JLo were spending time together, following her split from Alex Rodriguez, the former couple flew up to Montana to spend some time together at the 5,800+ acre ski resort. There were reports that the couple jetted up there following the May 2 taping of the VAX LIVE concert, attended a party together, and stayed “for about a week.” While they were there, Ben busted out his domestic side, cooking for Jennifer and “pulling out a few stops by trying to impress his former flame. 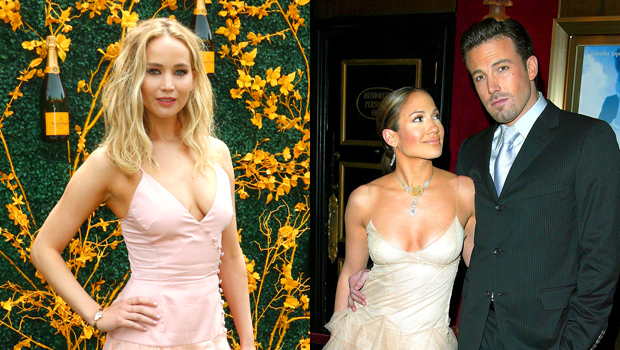 “They haven’t been able to spend time together like this in years, and he really enjoyed her company and catching up,” an insider told HollywoodLife EXCLUSIVELY, while another source said that these two are “excited with the relationship blossoming…they love getting to know each other again.”

Upon returning from her trip, JLo was spotted heading to the gym in Miami. She sported a pair of rainbow leggings, a cropped white t-shirt, and a pink sports bra. On her face, she wore a white mask with a lip print, making it look like she was puckering up for a kiss while keeping things CDC-approved. As for Ben? Upon returning to Los Angeles, the Dogma star was spotted talking to members of the Pacific Palisades security patrol. He waved to photographers from the driver’s seat, his full beard on full display.