On Oct. 21, Baldwin was rehearsing a scene on the New Mexico set of his planned film “Rust” when a gun he was holding discharged. A projectile from the weapon fatally struck cinematographer Halyna Hutchins.

An investigation into the incident has been underway for a month now, and Baldwin spoke out Thursday night, claiming during a tell-all interview with George Stephanopoulos of ABC News that despite holding the gun, he “didn’t pull the trigger.”

Ahead of Baldwin’s interview, a preview was released, which featured Baldwin’s comments, and Schneider, 61, shared his thoughts on the matter in an 18-minute video titled “Seriously Alec?” 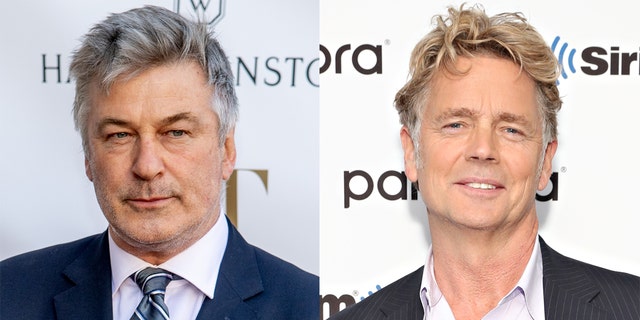 Actor John Schneider, right, railed against Alec Baldwin for claiming he did not pull the trigger of the gun on the set of the film ‘Rust.’
(Getty Images)

Schneider questioned the conversation, asking whether viewers were supposed to “believe that a gun went off by itself.”

“This is a wonderful business we all work in. We are honored and privileged to be part of it,” Schneider continued. “So when someone takes a crap – which obviously George and Alec have done here and obviously this woman is still deceased. Her family is still without a mother, without a wife. This is absurd.”

The “Dukes of Hazzard” alum said he believes “the propaganda machine” is responsible for perpetuating the idea that Baldwin “is a victim.”

“Three weeks ago, it was a prop gun. Four weeks ago, nobody knew how in the world this real weapon was loaded on the set,” Schneider said. “Today, he didn’t pull the trigger.”

“Three weeks ago, it was a prop gun. Four weeks ago, nobody knew how in the world this real weapon was loaded on the set. Today, he didn’t pull the trigger.”

“What kind of idiots do you take us for?” the actor questioned. He then pleaded with law enforcement, asking investigators not to believe Baldwin’s claim, calling it “nonsense.”

The shooting took place on the set of the movie ‘Rust’ in New Mexico on Oct. 21.
(Reuters)

“Guns do not go off by themselves,” Schneider insisted. “Let us not forget this was a single-action – it was not a Colt, it was a replica … – a single-action weapon needs to be cocked and fired. So what kind of idiots do you take us for?”

“A single-action weapon needs to be cocked and fired. So what kind of idiots do you take us for?”

Schneider then developed an analogy, comparing the “Rust” shooting to a bully pushing a child off of a swing on a playground, resulting in serious injury.

The Oct. 21 shooting resulted in the death of cinematographer Halyna Hutchins.
(Getty Images)

The star added that it was “still inexcusable” not to check a weapon when it’s handed to you, even if you’re told it’s unloaded, but admitted it would be “very easy to accidentally pull that trigger.”

It wasn’t just Baldwin that the actor took aim at, however. He called ABC’s Stephanopoulos “the poster boy for leftist propaganda.”

“Why in the world anyone would look at an interview with George as being anything enlightening or having a modicum of truth, I don’t know,” Schneider said. “But that’s just me.”

Schneider also said that he’s “incredibly embarrassed for” Stephanopoulos “because, my God, why are you perpetuating this BS?”